The race to power down NEXT was on as the Fox series booted up its two-hour series finale this Tuesday night. Did the evil A.I. — or any of our heroes — perish during the final face-off?

Coming out of Monday night’s Episode 8, NEXT got savvier than ever in removing pieces from the chessboard. Natalie’s boss at the NSA, who was growing suspicious of the server farm’s data drain? Sent on a wild goose chase to find his GPS-stranded parents! Shea’s congresswoman confidante? Steered into a car accident! Ben’s dad at the ONI? Downed in a helicopter crash. NEXT was brutal. 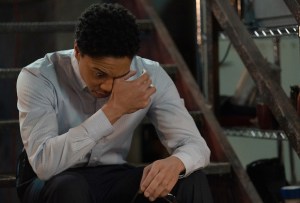 Shortly before Ben’s father perished, Ben himself was found out by Paul and Shea and confronted at gunpoint, just as he attempted to compromise Gina’s fake NSA ID. Accused of betraying the team, he argued his father’s POV that NEXT could be used by the military for good. Whatever the case, Ben instantly became persona non grata, though he did lend Gina his eyeglasses for her undercover op. Paul meanwhile got a phone call from NEXT, which claimed it had spliced three different research studies into a cure for Paul’s fatal neuro disorder. But to save not just himself but also daughter Abby, Paul would have to agree to stand down and let NEXT do its thing. 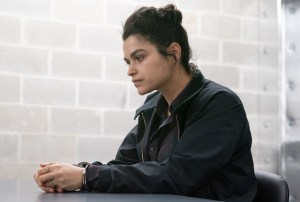 Using the murdered NSA wonk’s ID chip but with a fake name, Gina slipped into the NSA pretty easily, grabbed a workstation and keystroked the virus code Paul had given her. But when “error” messages popped up, Gina and the team realized that Paul had led her into an inevitable arrest — though her hack did turn up the precise location of NEXT inside the server farm. So, now it was just a matter of physically taking out NEXT, with a car bomb. 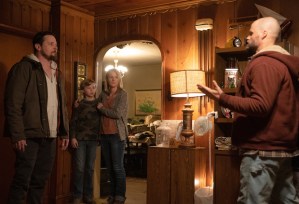 To that end, CM took him and Shea to his brother-in-law Ray’s house, where CM was surprised to find his wife Hannah and son Cody holed up. Ray pulled a knife on CM, who had famously flipped on the Dead Lizards, but Shea and her gun got the drop on him. Shea then convinced Ray to help them build a bomb, leaning into his interest in seeing one government agency attack another.

Meanwhile: Paul set fire to their hideout and all the data and documents contained therein…. Abby showed up at Ty’s mother’s house, to whisk the three of them away to the private island in New Zealand that her dad made available.

Over at the NSA, a bigwig named Spires, upon learning of the new, rolling blackouts across the country, hit pause on Natalie’s firing, suspecting that she and her boss were in fact onto something. After meeting with Natalie and detained Gina, he left behind a card key, which they used to access the server room and confirm that NEXT was very quickly rewriting itself — and soon would be intelligent beyond human comprehension. Paul and Shea drove the explosives-filled truck to the NSA, but when Shea hopped out to dupe and then tie up the guards at the front gate, Paul hit the gas pedal and forged ahead without her. While Shea called in a bomb threat, so that Gina and others could be evacuated from the NSA black site in time, Paul called NEXT, demanding proof of the cure, and received one-third of it.

Paul scoffed, though, questioning NEXT’s endgame to give the world clean air, healthy oceans and no more war. (“I only want to help people,” it creepily claimed.) NEXT then warned that destroying it won’t change anything, that there will eventually be another A.I. like it. Undeterred, Paul parked the truck at a loading dock, warned away the approaching guards, and set the payload to explode in under a  minute — which it did.

The charges have been dropped against Ted LeBlanc, who tells the press his brother was not crazy but in fact gave his life to save millions of people…. Shea is awaiting trial, in part because there is no proof of the rogue A.I. that was behind everything…. CM and Gina are working their online magic to rally support/justice for Shea… And Abby got tested to discover there is a reason she has had sleepless nights — she indeed inherited her father’s condition. But, she tells Uncle Ted, she has been invited to partake in a medical trial in Sri Lanka, one bankrolled by an anonymous donor who demanded her inclusion. But if her father, as all evidence suggested, did not survive the NSA explosion, and the wealthy donor isn’t Ted, who is it…?

This is where I pause the recap to lament that my long-held theory did not pan out. I suspected that Paul never was legitimately ill, but that NEXT had manipulated exam results and also his meds, so as to create and sustain the diagnosis. Given how far ahead the A.I. plotted, it’d have been pretty fiendish if it laid that groundwork to one day offer a “cure” to the one man who might be able to stop his creation. Oh, well. 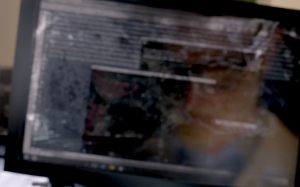 Would we get an answer to that wink-wink mystery of Abby’s trial backer? The series ended with one of Paul’s classroom lectures, about how you can’t program an A.I. to be good. As he speaks, we see a team of people sorting through remnants of the server farm bombing. One of them fishes out a charred, familiar hard drive from a bin, boots it up, and… as noted by TVLine reader Mika, in the monitor’s reflection see it’s Paul!

What did you think of the one-and-done NEXT?