When it came to putting together The Mandalorian‘s Season 2 finale, the Force was strong with the Disney+ hit’s secret-keeping. (SPOILERS AHEAD!)

Speaking about the surprise cameo that capped the finale, executive producer Jon Favreau said Monday on Good Morning America, “It was very tricky, because it’s very hard to keep a secret nowadays. There are so many people involved with the process. Every piece of [Season 2] casting leaked, so we were so scared, right up until it aired, that our surprise cameo was going to leak, too.”

In the final moments of the Star Wars series’ sophomore closer — just when it looked the the good guys who had infiltrated Moff Gideon’s light cruiser, felled scores of strormtroopers and rescued Grogu would get unceremoniously mowed down by a platoon of Dark Troopers — a lone X-Wing appeared outside. Its robed pilot boarded the cruiser, then proceeded to slice and dice Dark Trooper after Dark Trooper, using a green lightsaber wielded by a gloved hand. When this Jedi arrived at the bridge where Mando, the Child and others were hunkered down, he lifted back his hood to reveal the face of a circa-Return of the Jedi Luke Skywalker/Mark Hamill. 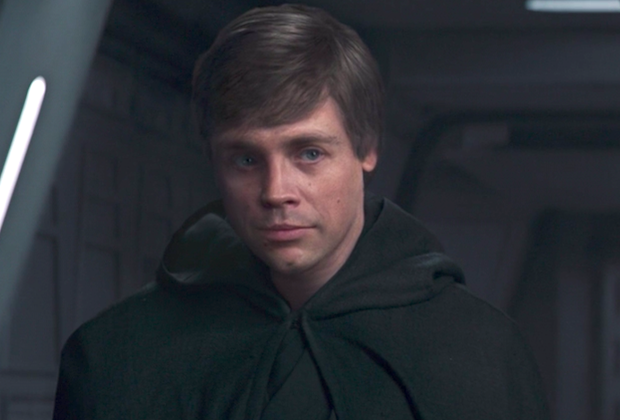 After earning Din Djarin’s trust by vowing to protect Grogu’s life with his own, Luke took the kid away, with faithful droid R2-D2 wheeling beside them.

As listed in the closing credits, Max Lloyd-Jones (When Calls the Heart) served as “Double for Jedi.” But Favreau suggested that Hamill himself was also on-set for the memorable moment.

“To have Mark Hamill on set filming and us using whatever technology we had available to de-age him and make him look like he did in the old films” — and kept secret — was very special, Favreau said.