This Wednesday in the SEAL Team fall finale, it was all hands on deck — and we do mean all — when Ray went missing after the suicide bombing of the Tunisian cafe.

In the immediate wake of last week’s shocking explosion, we saw the charred and crumbled cafe, and Ray’s body on the floor behind the fallen table at which he had and State Dept. colleague Olivia Green been seated. And then a figure approached, nudging his body… which was still alive, we saw. 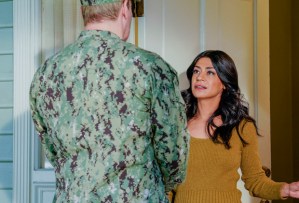 Back home, all they knew was that Ray was missing, and Jason personally delivered the news to Naima, at the family’s new home. Soon enough, all of Bravo descended upon the Perrys, as did Natalie and a most welcome Stella (who apparently still grabs the occasional coffee with Ray’s wife). While congregated, Sonny and Thirty got into it a bit, each blaming the other for Bravo being grounded. But it wasn’t long until Bravo got buzzed to report in, leaving Jason and Clay behind. Jason, though, was resolved to play some role in the search for Ray, so he brusquely walked away from Natalie and set off to see what he could make happen.

Following some awkward small talk about Stella’s failed attempt at another go with Clay (back when he was just starting out with Rebecca), she observed that he wasn’t spinning up with the others. He explained in no detail that he had been suspended from operating, and Stella gave him the pep talk he really needed.

Back at command, Davis laid out the intel on where Ray might be and who might have him, and then, since Bravo isn’t approved to operate, each team member was assigned to Alpha, Charlie or Foxtrot. Jason meanwhile stormed into Lindell’s office, insisting that 1) Bravo regroup for this rescue mission, 2) led by him and C) with Clay on the team. Lindell gave the OK on the first two, but was iffy on the third — until Jason pressed a bit harder, and soon enough the reconstituted Bravo Team was spinning up with the others. Jason, though, made clear to Sonny that this was a one-off for him, and that when it comes to leading Bravo, maybe Sonny should step up sometime. 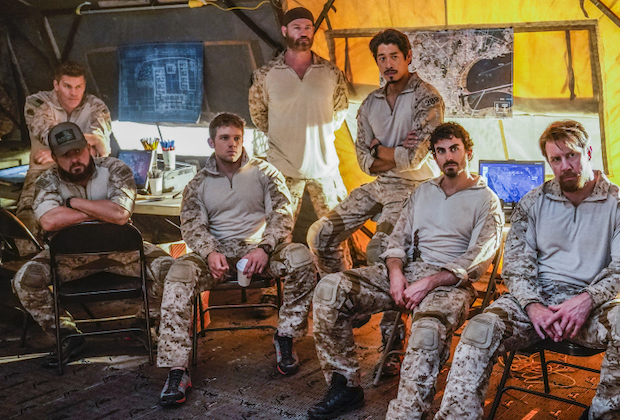 Once in Tunisia, Jason strongly questioned a plan to breach one location before the second, saying it’d be wiser to hit them both at the same time. Bravo thus took the second possible location, even though it meant having no sat cover. Alas, they were spotted as they drove toward the building, and a firefight soon ensued, with the baddies having the higher ground/advantage shooting from the windows. Ray, meanwhile, was indeed inside the second location, and once he saw everyone start to scramble, he wrenched himself free from the wall he’d been shackled to.

But just as Bravo turned the tables and seized an opportunity to breach, a fleeing Ray was clotheslined in a hallway, bagged, and dragged to an SUV parked outside. As such, Bravo found no one inside the building — though later Davis produced video from a found cell phone that showed Ray had been there, and they just missed him. And now, with his captors poised to trade the valuable Westerner to the highest bidder, there was no knowing where and with whom Ray would end up….

What did you think of the fall finale, “Shockwave”? And how awesome was it to see Stella back? (Rebecca who?) SEAL Team returns Wednesday, Jan. 13.