The creative team behind CBS All Access’ adaptation of The Stand knows you might be wary of watching a show centered on a deadly virus. The miniseries’ premiere, after all, drops familiar words like “quarantine” and “tested positive,” and there’s a whole lotta coughing — all of which we’ve seen and heard quite often during the real-life coronavirus pandemic.

But for those unfamiliar with the Stephen King novel on which The Stand is based, executive producers Benjamin Cavell and Taylor Elmore can assure you the show is more than just an eerie mirror of our current world. In fact, “it’s really not about a pandemic,” Cavell suggests. “It’s about the struggle that follows.”

The Stand takes place during and after the spread of Captain Trips, a highly contagious strain of influenza that wipes out most of the world’s population. Left in its wake is a group of survivors — including Stu Redman (Dead to Me‘s James Marsden), Larry Underwood (Watchmen‘s Jovan Adepo) and Nadine Cross (Aquaman‘s Amber Heard) — who attempt to build a new society, all while warding off a threat from the sinister and supernatural villain Randall Flagg, played by True Blood‘s Alexander Skarsgard. 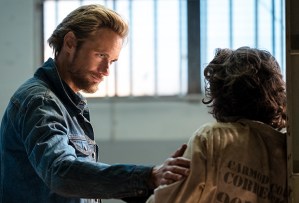 Though the show’s premiere drops Thursday, Dec. 17, this version of The Stand — the second TV adaptation, following a 1994 miniseries that starred Gary Sinise and Molly Ringwald — has been in the works since 2017, when CBS All Access’ head of programming, Julie McNamara, approached Cavell about a new project based on King’s novel.

“Even three years ago, it felt like that was a moment when The Stand was eerily resonant already,” Cavell says. “We were all coming to question so many things that I had grown up taking for granted — the structure of human society, of human civilization, of American democracy. Those are the questions at the heart of The Stand. What would you do if you were given the chance to push the reset button on humanity? How would you rebuild? That was what drew me to it.”

And though Cavell acknowledges that “the events of the real world have given it a different kind of resonance,” he and Elmore hope viewers won’t be deterred by the inciting incident of a global health crisis. (“We’re very faithful to the way the disease is portrayed in the book,” Cavell adds. “Captain Trips doesn’t feel like COVID. It doesn’t look like COVID.”)

“This is an awful time for the world right now, and you don’t want to add to the misery,” Elmore admits. “But even though this story tracks similar territory, at least initially, it becomes something very different as it goes along. It becomes about who we are as people.”