Let the guessing games begin! As Season 19 of NBC’s The Voice hurtles toward its finales next week (performances Monday at 8/7c, results Tuesday at 9/8c), we’d love to say that we’re sure about who the winner is going to be. But over and over, every time we’ve thought that we had the frontrunner picked out, we’ve been proven so wrong as to practically redefine the word.

Of course, that isn’t going to stop us from making some predictions, it just means that nobody should put their money where our mouth is. (We wouldn’t even do that!) So, what are the odds of each of the Top 5 being named the winner? With one eye on the contestants’ statistics and the other on the sing-off’s historic voting patterns — as well as both ears on the finalists’ past performances — we’d say that… 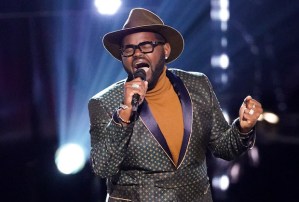 … John Holiday has a 15-percent chance of winning. Team John Legend’s resident music professor could probably earn a Grammy singing aloud one of our Voice recaps. He’s the quintessence of just. That. Good. That said, he’s never seemed quite as comfortable on stage as he did in his flawless Blind Audition. He has the chops to win, for sure. (Doubt it? Re-listen to the “All by Myself” cover that put him in a league of his own.) However, he needs not only the right song — think “Defying Gravity” from Wicked — but the confidence to really own his moment.

… Ian Flanigan has a 19-percent chance of winning. There’s a reason we sometimes joke that they might as well call the show The Country Voice; that cowboy vote is huge. So a country singer on Team Blake Shelton is going to be tough, if not impossible, to beat. On top of that, laidback Ian is a solid vocalist. Explosive, he ain’t, but he knows his lane and navigates it like he paved it himself. Hell, the dude even managed to make Sarah McLachlan’s “Angel” sound like his own. 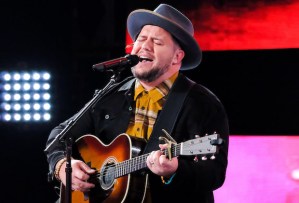 … Jim Ranger has a 25-chance of winning. Arguably Ian’s biggest competition is his own teammate, who won America’s vote over him in the Semifinals, is a more dynamic presence on stage — when Jim combusts, he combusts! — and like Season 18 victor Todd Tilghman is a preacherman. What’s interesting to contemplate is the possibility that Team Blake’s two remaining contestants could split the vote of their coach’s fan base, thus paving the way for an upset. That’s why we suspect that…

… Carter Rubin has a 32-percent chance of winning. As a general rule, very young fellas don’t fare terribly well on The Voice, but Team Gwen Stefani’s sweet-hearted 15-year-old, with his poised performances and nuanced vocals, has proven to be the exception. He struck a chord with the audience even before he covered the Muppets (can we please make that a regular thing?) and now seems just a showstopper away from tipping the scales in his favor and winning away the title from his elders. 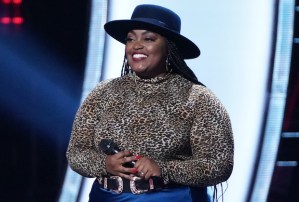 … DeSz has a nine-percent chance of winning. To be clear, that number isn’t so low because DeSz isn’t good enough to earn a victory lap; the Team Kelly Clarkson powerhouse has presence for days and a range that almost goes beyond borders. But to date, the sing-off has yet to name a Black woman its winner, and even standouts like like Toneisha Harris, Kyla Jade and Rose Short have had to settle for second-, third- and fourth-place finishes.

Who do you think will win Season 19 — and who do you think should win? Very different questions. Vote in the polls below, then back up your opinion in the comments with sound reasoning.