The Mandalorian made a bold move this Friday, ahead of the Disney+ series’ Season 2 finale.

As set up last week, Mando needs the help of Migs Mayfeld (played by Bill Burr), the Imperial Military sharpshooter-turned-merc who is now serving out a prison sentence at the Kartho chop fields (think: galactic junk yard, complete with many charred TIE fighter shells). Cara, as a marshal for the New Republic, shows up at the chop fields to lay claim to prisoner 34667, who is at first anxious about his new destination — and then surprised to be led to Mando. (Boba Fett meanwhile seemingly made a pit stop to pick up some matte black Krylon. Looking nifty.)

Mayfeld balks at helping Mando track down no less than Moff Gideon, but has a change of heart (as everyone does!) when they realize “the little green guy” is in jeopardy. He needs access to an Imperial terminal, though, and there is one on the planet Morak, which is a secret Imperial mining hub — for the volatile and explosive fuel rhydonium.

To “go in quiet,” they plot to commandeer a Juggernaut (cargo transport) and replace the two drivers. Mayfeld refuses to partner with “Rebel dropper” Cara, Fennec is wanted by the Empire, and Boba reckons his face will be recognized, so that leaves Mando himself to do a covert costume/helmet change. After the Juggernaut is claimed and the troopers replaced, Mayfeld goes on a bit about “beliefs” (as in those of the Mandalore) and how fluid they can be, when need be. (For example, does Mando’s creed prohibit him from removing his helmet, or from revealing his face? Two different things!) Their attention turns to the actual route they are running when two Juggernauts explode in grand fashion ahead of them. A skiff of alien pirates then approaches Mando and Mayfeld’s vehicle, aiming to plant thermal detonators inside the cargo. Mando fends off one, and then two, batches of pirates, but more and more come. Luckily, as they get closer to the refinery, TIE fighters swoop in to pick off the marauders. The amount of salutes and applause that Mando and Mayfeld are met with reveals just how rare it is to successfully deliver rhydonium, alive! 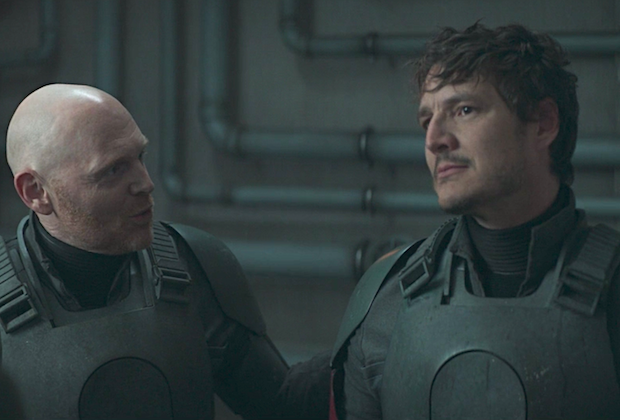 There’s a terminal in the mess hall, but Mayfeld spots an officer, Valin Hess, whom he used to serve under and thus might recognize him. Mando says he will handle the terminal access — even though to do so, he will need to remove his helmet for a face scan (that.. does what, exactly? Because it sure isn’t recognizing non-employees!). Just as Din completes the download of coordinates, a curious Valin Hess approaches and asks him for his TK number. Din starts to hem and haw when Mayfeld comes up and introduces both of them, explaining that his pal “Brown Eyes” here is hard of hearing. Realizing that he is talking to the men who successfully delivered rhydonium, Hess invites them for drinks before they rush off to finish some “TPS reports.”

When the matter of what to toast comes up, Mayfeld suggests Operation Cinder, during which the Empire apparently lost up to 10,000 men — “a small sacrifice for the greater good,” Hess argues. Mayfeld won’t let this dark spot in Imperial history pass, though, and is clearly personally wounded by it. Hess suggests that what people want is “order” and not freedom, and that when the Empire is back in power, “they will welcome us back with open arms.” He then toasts, “To the Empire!” But rather than raise his glass, Mayfeld raises his blaster and shoots the officer, there in the middle of the busy mess hall.

A shootout follows, as Mayfeld and a re-helmeted Mando escape out a back window onto a ledge above a dam. From a sniper’s perch, Fennec and Cara provide cover, and the gents make it to the roof to be whisked away by Slave I — but not before Mayfeld grabs a rifle to sharpshoot a Juggernaut and start a chain reaction of explosions: “We all need to sleep at night.”

When the full team regroups on the ground, Mayfeld is resigned to return to “the scrap heap” on Kartho and offers his hands to be shackled by Cara. She, though, was duly impressed by the explosion he set off at the refinery, and laments to Mando, “It’s too bad Mayfeld didn’t make it out of alive.” Meaning, he is free to go — and happy to do so, is he! 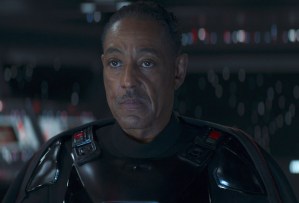 The Mandalorian‘s first Baby Yoda-less episode closes aboard Moff Gideon’s cruiser, where the comms officer cues up a holo-message from Mando, who recites back to the baddie a version of his own words from Season 1, Episode 7:

“You have something I want. You may think have some idea what you are in possession of, but you do not. Soon he will be back with me. He means more to me than you will ever know.”

What did you think of “The Believer”?