The Christmas Setup is Lifetime’s first LGBTQ+ Christmas movie, but that’s “not necessarily the most accurate way to describe it,” star Ben Lewis tells TVLine.

The Arrow vet stars alongside his real-life husband Blake Lee (Parks and Recreation, Mixology) as former high school classmates in the holiday flick (airing this Saturday, Dec. 12 at 8/7c). When Lewis’ Hugo, a successful big city attorney, returns home to Milwaukee for Christmas, his mom Kate (The Nanny’s Fran Drescher) arranges for Hugo to run into his secret crush Patrick (Lee), who’s back after a successful stint in Silicon Valley.

“We’ve been calling it the first LGBTQ+ Christmas movie that Lifetime has made,” Lewis notes. But “we can only really claim to represent the ‘G’ in the LGBTQ+. So I hope that we’re just opening a door for queer people of color, trans people, gender non-binary people to see themselves represented. It’s so great that, only in this year, there are four prominent queer Christmas movies being made and being released. It’s just important that it’s not a trend, that people say like, ‘Oh, well, we made the gay movies. Now we can move on.’ This is just the beginning.”

Below, Lewis talks about working with his hubby for the first time and Lifetime’s determination to do right by The Christmas Setup. The actor also weighs in on the status of the Green Arrow and the Canaries spinoff and his character William’s future. 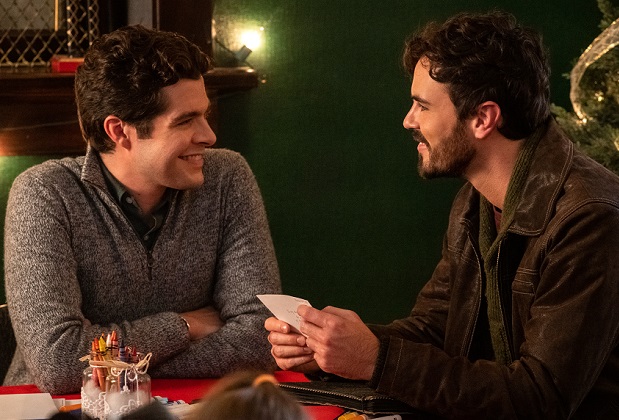 TVLINE | Did the producers reach out to you and your husband, Blake, because you were a couple and were already quarantined together, making it safer to film during the pandemic? Or did they think it would add something to the movie to have a real-life couple?
I don’t know exactly what the initial impetus was for it. But I think it was both, honestly. It’s interesting, people seem really excited about the fact that we’re a real couple starring in this movie together. [Laughs] Obviously, we were excited to do it. We’ve been together for 10 years, but we’ve never acted opposite each other. We were also a little bit nervous going into it, just because who you are at home in the privacy of your own home with your partner is not necessarily who you are at work. So we were interested to see how that was going to sort of play out.

TVLINE | I think people are excited because it adds a level of realism to a fantasy, and it makes it not so fairytale-ish.
Yeah, I think that’s true. I think what people are really responding to about the movie is these movies are, by nature, fantasies, basically. But I do think that there was an attempt on Lifetime’s part, even though these movies aren’t known for their realism, to make this one feel as authentic as possible. Blake and I being a real couple plays a big role in that, as well as having not just two openly gay actors play the lead roles, but also having a gay writer, having a gay director, having a gay executive producer. You can only make your first LGBTQ Christmas movie once. [Laughs] I think they really wanted to get it right.

TVLINE | What did it mean for you to get to be a part of that historic moment for Lifetime and to be a part of this movie?
We weren’t overly familiar with Lifetime’s holiday movies, [so] I think that we went into it sort of with a blissful ignorance. I’m Canadian. They shoot a lot of these movies up in Canada, and most of the Canadian actors I know have been in one of these movies, either for Lifetime or Hallmark or whatever. So when it came my way, initially, my first thought was like, “Oh, now I’m going to do one of these movies.” I didn’t really think of it as being a breakthrough in any way. I guess I knew it was on paper, but I don’t think I really understood the impact until our casting was announced, and all of a sudden, all these people, including a lot of queer people who we know, really came out of the woodwork to tell us like how much they love these movies, [how] they watch them every year, and how much it meant to them that we were going to be starring in it. So through everybody else’s eyes is how we’ve come to understand the impact that it’s going to have. It’s hard to be objective about it when you’re in it.

TVLINE | These Christmas movies tend to follow a certain formula. Would you say that this one falls in line with that? Or does having a same-sex couple at the center of it add something to the movie that sets it apart?
I think both. It definitely follows the traditional holiday movie narrative, just in terms of story points and structure and all that stuff that’s deeply satisfying to the audience and that they tune in to see. The Christmas movie traditionalists are not going to be disappointed in that regard. But I do think it definitely offers something new and something fresh. We didn’t go in with any sort of preconceived notions about what these movies are supposed to be. Michael Murray, the writer, has written a lot of these movies. One of our producers, Danielle von Zerneck, she’s made a ton of these movies. We sort of approached it as if we were making this really sweet, funny, charming, almost indie movie… albeit a Christmas indie movie. [Danielle] sort of referred to herself as the Lifetime Police. If we were straying too much in terms of tone or whatever, she would steer us back on track, because she has a real deep understanding of what the audience for these movies wants to see. I hope that the traditional audience for Lifetime movies really loves it and embraces it, and I think it also has a lot to offer for, certainly, the queer audience, who’s maybe not felt represented by these movies in the past. There’s, hopefully, something for everybody.

TVLINE | After this experience, would you work with Blake again? Was it a happy working experience?
[Laughs] 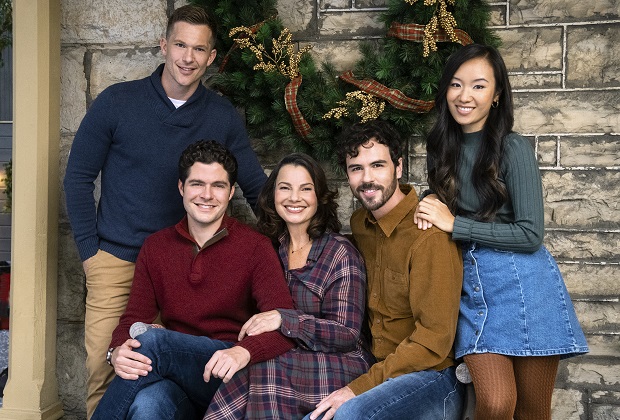 TVLINE | And would you do another Christmas movie?
I think we definitely would work together again. It’s so interesting, because when this movie came our way, we thought like, “This is such a unique, once-in-a-lifetime experience, and who knows, maybe it will be,” but I think that by day two or three, we were like, “We never want this to end.” Not just because we had a great time working together, which we did, but the cast and crew that was assembled for this movie was like the happiest, most harmonious group that I think I’ve ever [worked with]. Everybody got along so well. I’ve known Ellen Wong, who plays my best friend in the movie, for like 11 years, I think, since we were in the movie Scott Pilgrim vs. the World together. Chad Connell, who plays my brother in the movie, I’ve known for even longer than that. Pat Mills, who directed it, I’ve known for like six years and have been dying to work with. The only member of the core cast that we didn’t know already was Fran [Drescher], but if you grew up watching The Nanny, which I think most women and gay men did at some point, you feel like you know her, and truly, with Fran, what you see is what you get. She’s exactly what you want her to be and even more.

I think it would be tough to match the chemistry that this group had. It kind of felt like lightning in a bottle. I would love nothing more than to do another Christmas movie with this group. I don’t know if it would be necessarily a sequel to The Christmas Setup, although that’s an idea that’s been floated around, so we’ll see. If the audience has as much fun watching it as we had making it, then hopefully that might be on the horizon. 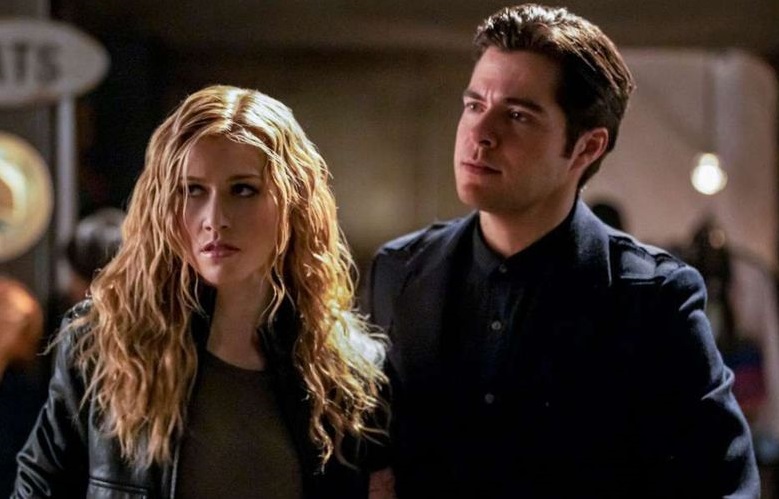 TVLINE | I have to ask: What have you heard about the potential Green Arrow and the Canaries spinoff status?
I haven’t heard anything about it in quite a while. I was always sort of a little bit out of the loop because I was not contractually attached to it the way that Katie [Cassidy] and Juliana [Harkavy] and Kat [McNamara] were, so I don’t really know. That’s another group that had such great chemistry, and I would never say no to the opportunity to work with them again. But it’s been over a year now. I don’t know. You would have to ask them about the status of it. But if it ever happens, I would be thrilled, because I love those women.

TVLINE | Your character was kidnapped last we saw, so we need a little resolution to that.
I know! It would be so sad if that was the last time that you ever saw William. I think he deserves a lot better, and I was constantly pushing, particularly in the last season and when we were talking about the spinoff, for him to have a love interest. I would love to see that. I would love to see how William Clayton spent the holidays with his partner. [Laughs] 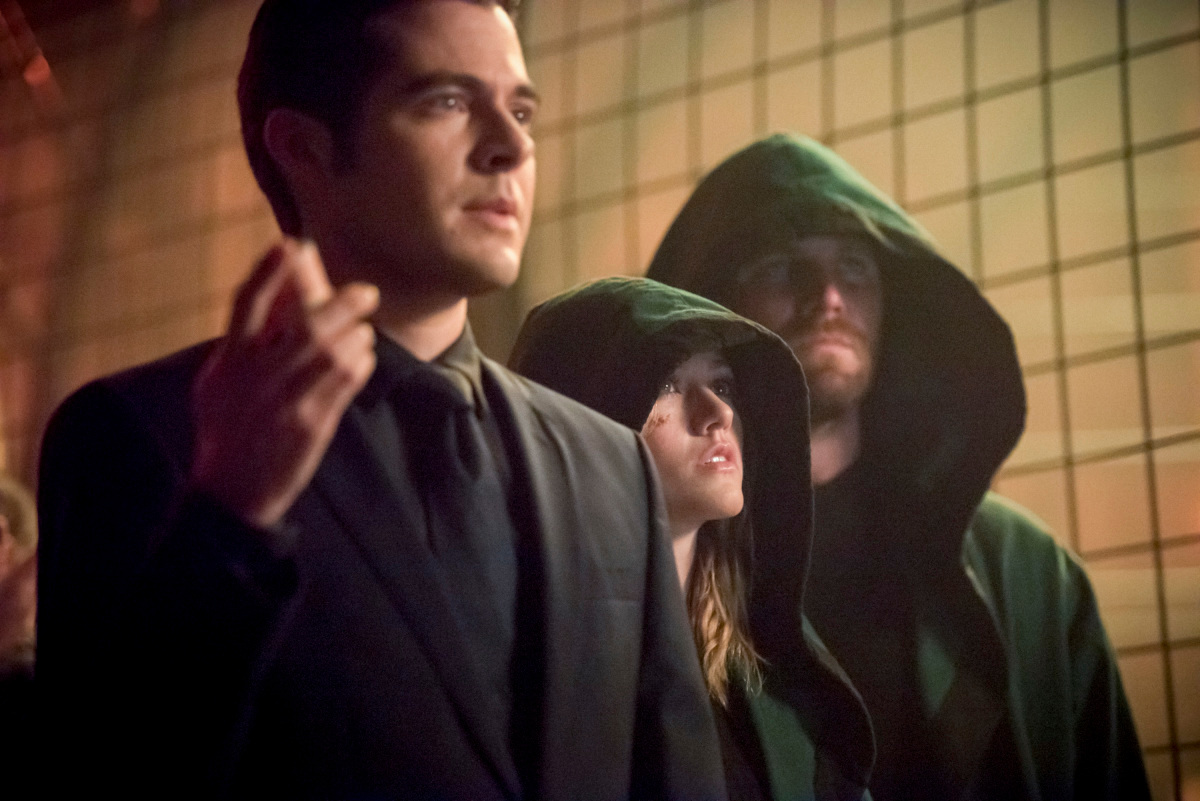 TVLINE | Well, the network hasn’t said for sure that they’ve passed on it, so there’s a sliver of hope.
Yeah, I don’t think anything is official. It feels like if there was forward momentum with it, that the pandemic, obviously, threw a wrench in that, as it has with numerous, countless things. I loved playing that character. I was actually thinking about Arrow in relation to this Lifetime experience, and how privileged I feel, in the last couple years, that I’ve been able to represent a queer storyline in more traditional heteronormative institutions, like with a superhero show and, in this case, with the holiday movies. It’s not lost on me how privileged I am to have that opportunity and to have been given both of these platforms. I feel very grateful.

TVLINE | Perhaps, The Christmas Setup is William’s life on another Earth.
Oh, my God, I would love to think that. [Laughs] There are definitely similarities, which are similarities to me as well, which is that they’re both relatively coiffed and relatively klutzy. I guess that’s just what I bring to both of those worlds and those characters.