Talk about a crash landing. HBO Max’s The Flight Attendant, with the final moments of its fifth episode, delivered a brutal hit-and-run that flung one character’s loved one onto the NYC asphalt, as Cassie Bowden’s wild, weird world continued to spiral.

How will the titular character’s go-to confidante, lawyer Annie Mouradian, react to this latest, tragic turn of events? Might the fallout of Max’s accident — no spoilers here! — forever damage the already precarious friendship between Annie and Cassie?

TVLine spoke with Girls alum Zosia Mamet about what’s ahead in the dramedic thriller’s final three episodes, the first two of which premiere this Thursday on HBO Max.

TVLINE | You and Kaley have such fun interplay, such good banter. Did you know each other at all before?
We didn’t. Everybody thinks that we did, which I take as the highest compliment. It just happened to be one of those magical things where my audition was with her, the camera was rolling in this tiny room on the Warner lot, and Kaley walked up and booped me on the nose and I immediately swatted her hand away. It was like “Cassie-and-Annie” were born in that moment. We got lucky – we happen to adore each other and have that thing where we feel like we’ve known each other forever. 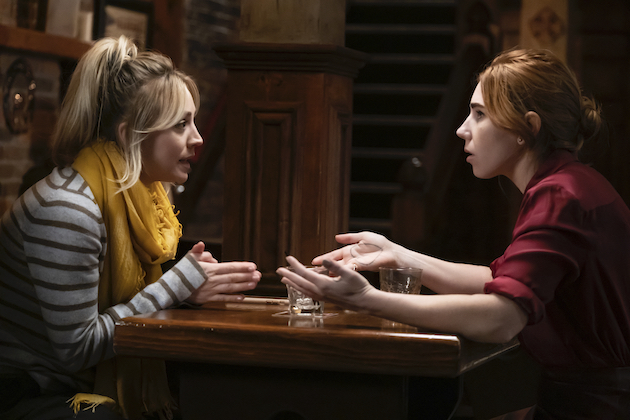 TVLINE | What do you think — or maybe you know, to some degree — is the foundation of their strange friendship?
I think that they’re childhood friends, that’s sort of what we have talked about. There is an aspect to their friendship that to me happens a lot.  I’ve experienced this recently, and I know a lot of girlfriends of mine have, where you get to a certain age, you hit your 30s as a woman, and there are certain friends you have had since childhood that you would never be friends with if you met them today. But there is this history that entrenches your friendship, and eventually it’s lifelong. You’re “stuck” with this person — and you kind of hate them in some ways? — but they essentially become family. They picked you when you were so young and you’ve been friends for so long that there’s no chance it’s ever going away, and yet it’s so dysfunctional, the way a relationship with a family member can be.

I think Annie and Cassie genuinely love each other, but they’re so different. They push each other’s buttons in a way that sisters do, but I think that their relationship has such deep history, and because of that there is a deep love and understanding of who the other one is.

TVLINE | So while Annie may be the “In Case of Emergency” contact on Cassie’s phone… perhaps not the opposite.
Perhaps not! [Laughs] I’m not going to say no for certain, but perhaps not. 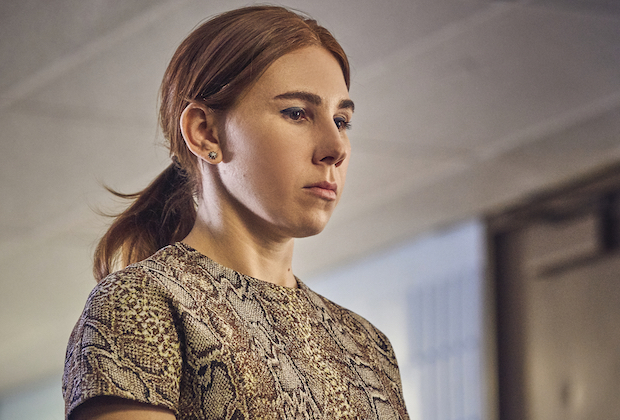 TVLINE | What do you find most interesting about Annie to play? Does she give you anything to do as an actress you haven’t quite done before? Or do you just like how incredibly well she swears?
Did you say swears?? [Laughs] Literally, there were so many takes where’s [co-showrunner] Steve Yockey was like, “Listen, I love it… but, like, maybe just four less f–ks in this take?” [Laughs] There were many written in, but I couldn’t help myself! Annie just loves to say that word, I guess.

But there is so much about her as a character that I had never gotten to do. The biggest aspect was I’d never really had the opportunity to play the straight man before, so that was a really fun and scary challenge for me. I’ve had this wonderful history so far of playing these incredibly zany characters — specifically playing one for the majority of my adult career — and that was such a fun muscle to flex. But Annie is so contained, and knows how to compartmentalize, and keeps all of her emotions buried deep down in the cellar of her body…. She gives nothing away. It was such a drastically different character.

TVLINE | Well for what it’s worth, in our Quotes of the Week column, most of the Flight Attendant ones thus far have been from Annie.
That makes me so happy! 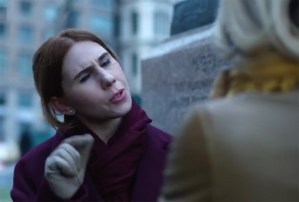 TVLINE | “I have this niece at NYU,  she goes to fraternity parties, and she has it just a little more together than you.”
That was a good one, we had fun with that one. Kaley and I improv’d a bunch on that. She was like, “I know Dahlia, and she’s a mess.”

TVLINE | The episodes coming up this week were the first that you filmed after the long COVID hiatus, I realized. Was visual continuity any issue?
You know, I leave that to the adults. I texted Steve Yockey right before we went back, like, “It’s cool that I gained 50 lbs. and got a face tattoo, right?” Thankfully none of us actually did that, so continuity-wise it was all OK. I think that more so than anything — particularly given the fact that we were the first show back up and running in New York, which is exciting but also scary — we got really lucky that everyone was down to go back to work. Understandably someone could have been like, “I’m sorry, I’m too scared,” but everybody was totally down. We had an amazing COVID team that kept everything together and kept the protocols incredibly tight, we all got tested three times a week…. We were so excited to finish the show, we just put our heads down and got to it.

TVLINE | Without spoiling Max’s (Once Upon a Time‘s Deniz Akdeniz) fate after Episode 5’s hit-and-run, I have to imagine that whether he survives or doesn’t, Annie is not going to be happy with Cassie.
You are correct in that regard, yes. Annie is definitely not happy with Cassie.

TVLINE | Would you call it a major turning point in their friendship?
I think it could be…. I don’t want to give anything away, but sort of speaking to what I said before, in terms of these friendships that are built so much on history but potentially don’t work that well, the “machine” is old and has been through a lot. Maybe it doesn’t work that well in its current state. Oftentimes when friendships do have a lot of history, sometimes there is stuff from 15 years ago — when you were 18 and she stole your favorite sweater — that you don’t even realize that you’ve held onto. And then something happens in your adult life — like someone getting your boyfriend hit by a car — that tips the scales, and all of those emotions you’ve been holding onto come to the fore. Sometimes that can make or break a friendship.

TVLINE | I don’t think it’s a spoiler to say that a one point you scream at Kaley perhaps louder than you have ever screamed at a costar before.
A thousand percent. Literally, in between takes Steve came up to me like, “Are you OK?” I was like, what do you mean? He said, “Well, it’s working for me, but is your voice going to last?” I was like, “Oh, I won’t have a voice tonight, but I’m good for the rest of the scene.” [Laughs] He was like, “OK, great!”

There’s also a superfun scene with a vending machine, which they had programmed to dispense the Chips Ahoy I wanted. When we shot he first take of the scene, I put in the dollar, I punched in the number… and the Chips Ahoy didn’t come out — and that’s why I started banging on the vending machine. It’s always fun when little curveballs like that bring something interesting into a scene.

TVLINE | Looking ahead to Dec. 17, will the finale give us closure on the season-long mystery? And might it set up a story for a possible Season 2?
Oh, that’s such a tough question….

TVLINE | But is there a hint at what that “more” might be, in success?
Hmmm…. Yes.

TVLINE | What, does Annie wake up in bed with a dead man?
No. And if she did, Annie would do a way better job of cleaning up the crime scene! Annie does not wake up in bed with a dead man, I can tell  you that for certain. And I can also tell you we would all be stoked to make more of this show, so… we don’t wrap it all up in a bow for you! I think that you’ll be satisfied, but you will hopefully want more.

Want moree scoop on The Flight Attendant, or for any other show? Email InsideLine@tvline.com and your question may be answered via Matt’s Inside Line.