Whoo-boy, Bravo Team is a mess. And things only got messier in the final seconds of this Wednesday’s SEAL Team.

Picking up two months after the events of the seismic season premiere, this is what everyone  was up to:

JASON is no longer operating but working in Ops — but while he technically is assigned  to Echo team, which is in the field, he can’t help but monitor Bravo, which has been having a really rough time adapting. (In their latest training exercise, with 30 as team leader, they missed their drop target by two klicks and didn’t keep pace.) As many predicted, Jason is now taking care of CERBERUS, though as we later see, even the canine is having trouble adjusting to his non-operator life. Natalie is in Jason’s life but due to wrap her stint at Va. Beach. As such, Emma via Skype cues her dad to take his own advice and “be all in, or out” with the woman in his life. 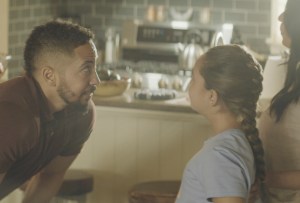 RAY is just now getting back from WOCS, adorned with an impressive “fruit salad,” and that’s why he isn’t Bravo One right now. After one night of revelry with his brothers at the Bulkhead, he’s looking forward to some diligently planned family time with Naima and the kids. The war on terror, though, has different plans, requiring Warrant Officer Ray to report to Tunisia to lay the foundation for a potential Bravo Team mission. 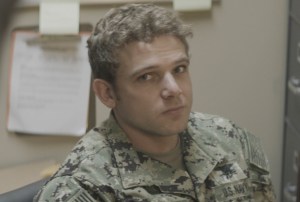 CLAY is pushing papers (more specifically, proofreading “reports on reports”) as punishment for (allegedly) writing the Marsden letter. He’s itching to get back to operating, and seeing as Bravo desperately needs him, Sonny nudges him to make a  plea to Lindell. Lindell, however, makes it clear that Clay’s punishment isn’t over yet — and even when it is, he will never return to Bravo Team. (This bombshell sets Sonny on quite a tear, nearly slugging Ray for creating a situation where Clay selflessly took the rap.)

All told, SONNY is unhappy to be a part of a floundering Bravo Team, ergo his anger at the Ray/Clay situation and even Jason’s decision to “quit” on his brothers. But even he is not without fault, when his accidental packing of live ammo for a training exercise gets the drill halted. On the bright side, DAVIS has earned herself a promotion, though it perhaps means that “more eyes” will be on her and she and Sonny seem to be mulling another go at romance.

At episode’s end, Jason meets Natalie at the Bulkhead to deliver an introspective speech that seems to be setting up his return to operating. But — plot twist! — he instead asks her to stick around as he “faces the unknown” of Ops life.

Meanwhile in Tunisia: Ray does a fine job of handling the local ambassador, State Dept. colleague Olivia Green observes. But just then, as they sit in a second-floor cafe, an explosion takes out the entire side of the building, right where Ray and Greene had been seated…..

What did you think of the episode “The New Normal,” hard as it was to see this near-unrecognizable Bravo team behave so badly?