If you’ve ever wondered about the unheralded support staff behind the docs on Grey’s Anatomy, then NBC’s Stateside debut of the Canadian drama Nurses is for you.

The premiere follows five nurses on their first day of work at a major Toronto hospital, where they’re informed that they’re a different breed than the residents when it comes to treating patients: “Those rock stars make them well. We make them matter,” head nurse Sinead (Vikings‘ Cathy White) tells her new charges. Then almost immediately, they’re thrown into trauma as victims come in from an attack on a nearby art college.

Now, let’s meet the group: Tiera Skovbye (Riverdale) stars as the kindhearted Grace Knight, who provides the show’s Meredith Grey-esque voiceover. For mysterious reasons that shall no doubt be revealed to us later, she used to work in the OR, but no longer does, and she definitely doesn’t want to explain why to handsome Dr. Evan Wallace (When Hope Calls‘ Ryan-James Hatanaka). While they’re treating their patient — who turns out to be the perpetrator of the attack — Dr. Wallace enlists Grace’s help in turning himself into a human blood bank since he’s a universal donor. As per protocol, Grace asks him about his sexual history. But lest you think these two are going home together, Grace ends the episode by calling another fella (Degrassi: The Next Generation‘s Raymond Ablack), who apologizes and says that his fiancée came home early. Twist!

The newbies also include Keon Colby (Upload and Suits vet Jordan Johnson-Hinds), a former college football player who quickly becomes known as the guy who couldn’t locate a baby’s heartbeat but has a very big heart of his own, judging by how he bonds with the mother. Joining him and Grace are Nazneen Khan (Legends of Tomorrow‘s Sandy Sidhu), a self-described “egghead” who unexpectedly finds herself spending her first day in the ICU with a braindead victim and his grieving mother; and Ashley Collins (The Firm‘s Natasha Calis), who is definitely the trauma junkie of the group, so naturally, she gets tasked with informing family members. 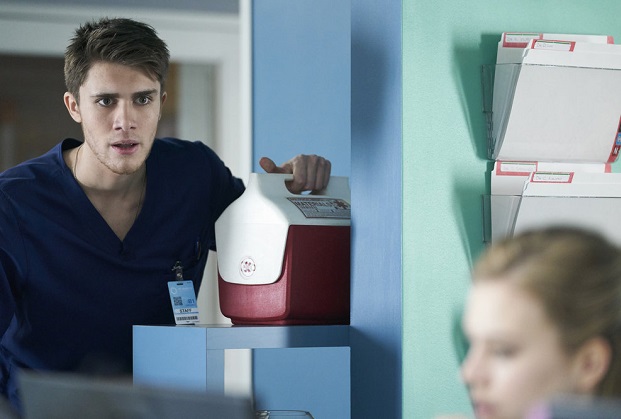 The final nurse is Wolf Burke (Workin’ Moms‘ Donald MacLean Jr.), who spends most of the hour carrying around a cooler with two severed fingers while frantically searching for their owner. Even though it’s too late to reattach the fingers by the time Wolf finds him, the recently married owner is just happy to be alive and to get his wedding ring back from Wolf, who gives him his own chain to hang it on. “That’s above and beyond,” the man tells Wolf in a sweet moment.

What did you think of Nurses? Grade it below, then hit the comments to back up your pick!