Forrest Gump has nothing on Frank Gallagher. Shameless‘ 11th and final season kicked off on Sunday with the patriarch dubiously inserting his family into the history of Chicago as a university student filmed his lies. But who needs the past when the Gallaghers are currently living through a historical time?

Let’s check in on how the clan is doing amidst a pandemic:

IAN AND MICKEY | It’s been six months since they got married, and the glow of sex is starting to wear off as their money dwindles. Ian is working a minimum-wage job at a warehouse, and he wants Mickey to get a proper paying gig, too. Mickey, meanwhile, has spent all of their wedding money to have fun, whereas Ian wanted to save it for a place of their own. Ian exclaims that they’re supposed to make decisions together and that it’s “our money” now that they’re married. Ian seeks advice from Lip, who’s got money/relationship issues of his own (more on that below). Ian tells Mickey that they should have talked before they got hitched about what they want the marriage to be. Like, do they both agree to be monogamous? Neither one wants to reply first, so they write down their answers on a piece of paper. Ian votes not to sleep with other people, but they’re interrupted before Mickey can turn over his answer, and judging from his relieved expression, he was not for monogamy.

LIP AND TAMI | Lip is fixing up an old bike to resell, and Tami — who had COVID — is still cutting hair, but money is tight, causing plenty of unspoken tension between the couple. Plus, Lip rented the house without asking Tami, so now he feels like he’s her bitch, running all her errands. Lip gets crafty with Tami’s requests, filling an empty coffee cup from the fancy café she likes with the stale corner store stuff, and pretending that the two cheapie paint colors he had mixed together are actually the high-end one she wanted. Tami is none the wiser. When Ian seeks out his advice, Lip says that Tami runs things with the money. She grew up comfortable so she’s constantly worried that they’re about to go broke, while Lip grew up with nothing and doesn’t care about money. And as far as the marriage thing goes, Lip and Ian didn’t have parents to show them what a relationship should be, so they have to figure this stuff out as they go, Lip says. At the end of the day, the entire family, plus Kev and V, come over to help Lip and Tami paint their house. 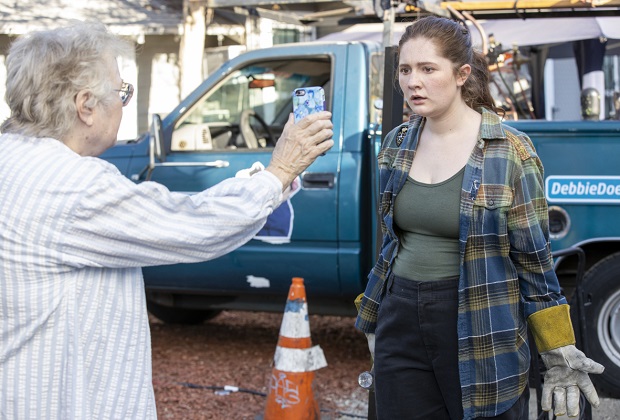 DEBBIE | Her relationship with Julia lands Debbie on the sex offenders list, even though Julia was just seven months younger. That means an anklet-sporting Debbie can’t even get close to Frannie’s school, and after a mix-up on the sex offenders site — it says Julia was seven! — Debs’ handywoman and wielding business, which has the unfortunate name of Debbie Does Everything, also takes a hit. Sandy saves the day by creating a Hot Lesbian Convict social media account for Debbie.

KEV AND V | With bars constantly being shut down, reopened and then shut down again by the city, Kev and V have found a new venture: selling weed products, including joints perfectly rolled by one of their toddlers. But since their business isn’t licensed yet, they’re keeping it on the down-low at The Alibi, which has a secret entrance for booze-y customers. 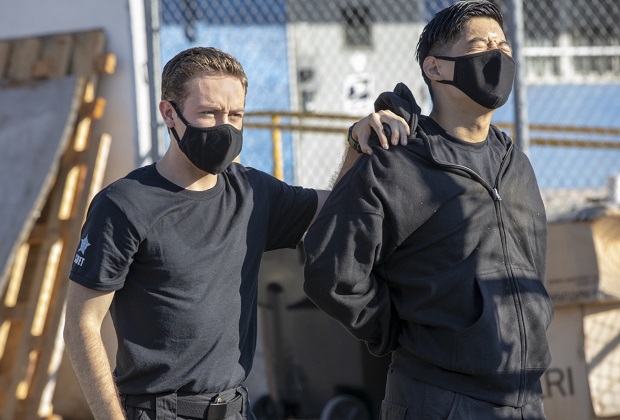 CARL | He’s acing the physical aspects of his cadet training so much so that his bosses want to put him on the street despite his young age and poor IQ score. Because of how many cops COVID has taken out, they need him, even though his knowledge of laws is abysmal.

FRANK | He’s outraged by all the trampling on his rights (to drink), of course, and thinks the neighborhood has gotten too safe. They need to make it dangerous again and shoot a couple millennials to get the gentrifiers out, Frank argues.

Shameless fans, what did you think of the final season premiere? Grade it below, then hit the comments!