The future is not looking bright — at all — for either Kensi Blye or husband Marty Deeks, coming out of this week’s NCIS: Los Angeles double header.

When summoned to coax intel from David Kessler, a deplorable old foe, about a fellow escaped con, Kensi inadvertently played right into the savvy killer’s hand. Because as the team realized in the second hour’s final moments, Kessler got caught during the prison escape on purpose, so as to leverage his info on the other convict into a private phone call with the President of the United States. Through his fellow escapee, who used to snoop for the CIA, Kessler came to possess compromising information on many a D.C. politician, so he used his VIP phoner to blackmail out of POTUS an executive order ensuring his release. 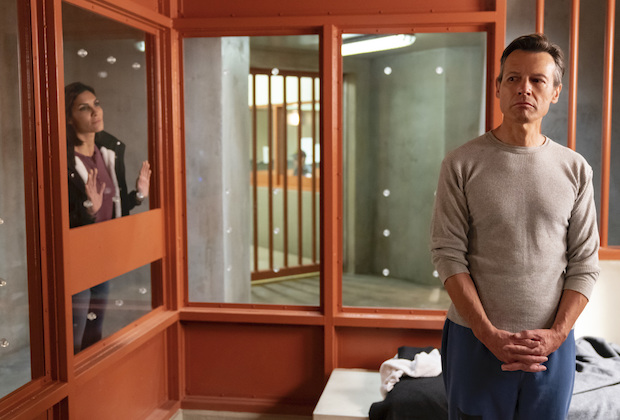 And mind you, Kessler made clear his designs on killing Kensi… among doing other things.

This new, looming threat of when Kessler (played by the episode’s writer, Frank Military) will strike “will be a ticking time bomb, which a great thing that this show does,” Daniela Ruah tells TVLine. “That seed has been planted, and it’s going to blow up in your face when you least expect it.”

Yet while Kensi is of course fearing for her life, “Deeks seems to be a lot more concerned than she is,” Ruah previews. “But it’s always like that. Listen, when my mom would fly to come see me before all this quarantine stuff, I would be a lot more concerned about her flying over here than when I’m the one flying over there. When it’s not you and you’re not seeing through your own eyes, it always feels a lot bigger and worse than it is.”

As if the threat of Kessler being in the wind and rarin’ to exact revenge wasn’t enough, Kensi and her husband also have to come to terms with the fact that Deeks’ job as a liaison between the LAPD and NCIS has been terminated. Permanently. There is nothing that even the mighty Hetty can do to unring this bell, and as Nell made pretty clear, Deeks is too old to go through FLETC and become a rightful NCIS agent.

Ruah hedged a bit on teasing what’s next for the family-planning, house-shopping marrieds in light of Deeks’ clipped career (“I don’t know if I’m allowed to reveal anything…”), but she did head off any concern that scene partner Eric Christian Olsen is leaving the high-octane procedural.

“Listen, if Eric were leaving the show permanently, we would know about that by now, and that’s obviously not the case,” she said. “So, somewhere and somehow, things happen that change the course of where the story is going.”