With its opening title reveal, this week’s episode of The Mandalorian had viewers fretting: What would be “The Tragedy”? Were you sufficiently steeled for what then unfolded?

The episode started out light and bright, with Mando chuckling at every time Grogu responded to his given name. But, Mando reminded the Child (and himself?), they had a mission, to get the kid to the temple ruins on Tython and unite it with a Jedi. But the more Mando detailed the Child’s destiny, the more it seemed he was talking himself into following through on it, since it meant parting ways with the wee one. 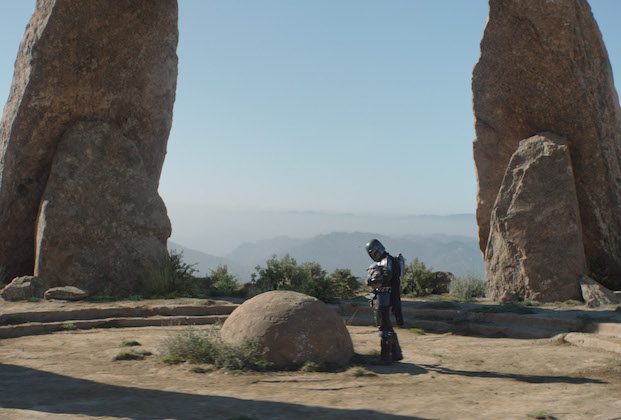 The actual trip to Tython is uneventful, as Mando parks the Razor Crest and jetpacks himself and the Child to the seeing stone atop a mountain. Mando sets the kid down on the stone, but nothing seems to happen, so he goes looking for any sort of “control” to start up the process. Just then, a ship appears in the sky — Boba Fett’s Slave I, to be exact! — so Mando goes to grab Grogu and whisk him to safety. But the etchings on the seeing stone have since lit up, and Grogu has entered a deep, meditative state, reaching out into the Force. What’s more, an “energy field” of sorts emanates from the etchings, keeping Mando from actually reaching his ward.

“I’ve been tracking you, Mandalorian,” says the cloaked figure emerging from Slave I. Mando assumes the person is after the Child, but no, he wants Mando’s armor — meaning, that which he took from Cobb Vanth. Because this bald, scarred man, who was glimpsed earlier in the season back on Tatooine, is indeed Boba Fett. That fact is confirmed by his companion, Fennec Shand, aka the assassin Mando left for dead in Season 1 but was saved by Boba Fett (and apparently some amount of bionic)s.

Boba (am I allowed to just call him Boba? Though it sounds like a tea?) says that in trade for the armor that belongs to him, he and Fennec will ensure the safety of the Child, the bounty on whom has soared quite high. But then another ship swoops down on Tython, from which pours out many stormtroopers. An extended battle follows, with Fennec using her rifle and Boba brutally wielding his staff. Mando meanwhile runs to grab the Child, but again is zapped by the energy field. In one of the series’ best kills so far, Fennec at one point nudges a huge boulder down a hill, and it mows down several troopers, Raiders-style. But just when it looks like the troopers have been neutralized, a second carrier full of ’em lands!

Mando, using his whistling birds, and Fennec do their best to fend off this new wave of baddies, until Boba jetpacks onto the scene, having reclaimed his full armor from the Razor Crest. Dropping bombs and firing missiles from his kneecaps (!), he forces the remaining troopers to retreat. As the two carriers fly off, Boba locks his jetpack missile on one, and its explosion winds up taking out the other.

But then tragedy No. 1 strikes, when a missile from behind the clouds barrels down on the planet and completely blows up the Razor Crest. As Mando gets a glimpse at the Imperial cruiser from which the missile was launched, we see Moff Gideon order the dispatch of his Darktroopers, four of which rocket down to the Tython surface and easily claim the Child, who is asleep after his tiring interaction with the seeing stone. Boba in Slave I does a loose follow of the Darktroopers, discovering, “They’re back! The Empire,” as he lays eyes on the cruiser.

After Mando salvages the gear shift knob and his Beskar staff from the Razor Crest’s ashes, Boba reveals his chain code, explaining that his father Jango had been a foundling, and thus the armor indeed belongs to him. Mando agrees and affirms that their deal is complete, but Boba notes that he and Fennec ensured the safety of the now-abducted Child, so they remain in the Mandalorian’s debt. The three set course for Nevarro, where Mando asks Cara Dune — now a badged marshall for the New Republic — to bend some rules and help him spring Mayfeld from prison, to help him track the Imperial cruiser. Cara is iffy, until she realizes the Child has been taken. And then she quickly changes her tune. 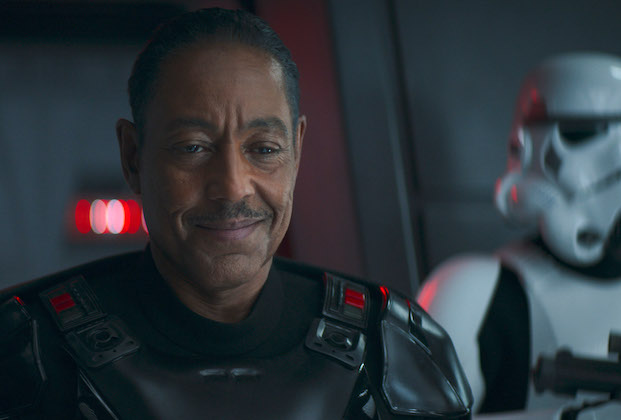 Meanwhile, aboard the Imperial cruiser…. Moff Gideon checks in on the Child, who in his cell is using the Force to lob two troopers around like rag dolls. Gideon is quite pleased by the Child’s powers, but gloats that using them does make the creature “ohhh so sleepy!” Gideon whips out his Darksaber and asks the kid if he has “ever seen one of these, from years past…?” Grogu is too winded to react. But for good measure, Gideon orders a trooper to shoot/stun the Child (!!!) and put him in shackles (!!!!!!!). He then tells his comms officer to get an encrypted message to Dr. Pershing, saying the donor has been secured….

What did you think of “The Tragedy”?