CBS’ Blue Bloods opened Season 11 with some salient reflection on police brutality, serial-killer scares for Danny and Baez, and the hint of one Reagan making a major life change. Plus, we got our fourth new family dinner guest in as many seasons!

As the premiere unfolded, there was a sense that Blue Bloods — which is about the NYPD police commissioner and his family — is perhaps the one TV show we wanted or needed to hear from on the topic of police brutality and civil unrest. That came in the form of Frank locking horns with City Council Speaker Regina Thomas (returning guest star Whoopi Goldberg), who tore into the NYPD on a morning radio show. Later confabbing in the commish’s office, Frank and Regina hit impasse after impasse, with each side urging the other to “de-escalate.” She asks Frank’s cops to stand down, but he maintains they get paid to stand up. (But for everyone?, Regina asks.) When Regina contends there are “criminals in the ranks” of the NYPD, Frank blurts out, “You need to get your head out of your ass,” for which he quickly apologizes.

Things between the two aren’t much better when Frank later shows up at Regina’s office. With the mayor clearly distancing himself from the police force as of late, and Frank vexed about how to serve the people and his officers without betraying either side, it falls upon Garrett to craft a resignation letter, complete with a pithy “P.S.,” that Frank seems to be considering sending to the mayor. 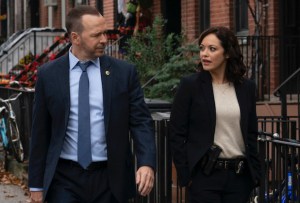 * While knocking doors to get info on a young woman found suffocated, Danny and Baez got locked in the cellar of an apparent serial killer’s brownstone. Shoved down the stairs, Baez busted up her knee badly, and was in great pain while Danny fruitlessly foraged for a way out. At one point, Baez shared how back when she lived in Alphabet City “with a muscle head,” no one showed up he day she got promoted to detective. Danny, meanwhile — as one of the Reagans for whom luck never seems to run out — takes for granted the family bonds he has, nagging Erin included, Baez points out.

Though Danny fails to get Jamie and Joe’s attention when they do a first knock at the brownstone, where the serial killer son has music pumped loud, eventually the sergeant and detective find Danny and Baez when they suspect foul play inside. Afterward, Joe, who still seems to be finding his place, if any, in his newly discovered family, declines a Sunday dinner invite, but there nonetheless is a special guest that week, when Danny brings a truly gracious Baez to break bread with his brood.

* In a storyline reminiscent of NCIS: New Orleans‘ own season opener, Eddie helped a young woman, Anita, locate the body of her father, who had died and got misplaced during the first heavy wave of COVID deaths. Eddie eventually leads Anita to the Potter’s field on Hart’s Island, where the latter recites a prayer her dad said before her every basketball game. As Anita weeps at the grave of the dad she had fought with last they spoke, it nudges Eddie to decide to show up for her own father’s upcoming “compassionate release” hearing.

What did you think of the episode “Triumph Over Trauma”?