Last week’s grueling mega leg may be behind them, but this season of The Amazing Race is far from over.

Only five teams remain as the contestants scurry to Siem Reap, Cambodia for what is bound to be one of the most crucial legs of the race. With the season’s second and final double U-Turn awaiting them, the alliance of five is finally forced to make strategic moves that are bound to sink somebody’s game. Did Wednesday’s episode transform this gang of friends into enemies? Let’s find out.

The teams race to a market in search of tuk tuks that have the Travelocity gnome riding shotgun. Teams have to help a local driver assemble the vehicle, then ride it to a pier for their next clue. Teams then have to travel by boat to a floating Buddhist temple where they’ll deliver their basket of Travelocity goodies to a monk. The volleyballers, who were enjoying the lead, get a huge shock when their boat stalls out mid-trip. (This is the definition of an Amazing Race-r’s worst nightmare.) The boyfriends and Chee/Hung speed by them, but their driver revs up the engine, and shortly after, the volleyballers are on their way.

DETOUR | After meeting with the monk, it’s detour time! Teams must haul in a net that’s more than half a mile long, gathering 30 pounds of fish to receive their next clue. Or: Teams can mix soil and plant seeds in a Cambodian garden. Chee and Hung wind up farming, along with the boyfriends, while the other three teams decide to fish.

U-TURN | Riley and Maddison are first to finish their task, but Gary and DeAngelo are the first to the U-Turn, which is unfortunate for victims Eswar and Aparna. The volleyballers then burn the board, so the brother/sister duo is the only team that’s totally screwed. (Do they have any shot at catching up at this point? Seems unlikely.) 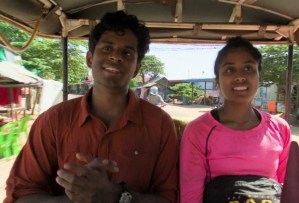 ROADBLOCK | Meanwhile, Hung and Chee and the boyfriends complete their gardens and race on. Teams must now learn how to make a ceramic tile from a local artisan, then solve a slide puzzle with their newly created tile. DeAngelo decides to forgo any official instruction, while Riley’s first attempt shatters. Chee makes the same mistake of not learning how to remove the tile, and as the rest of the teams stall out, Eswar and Aparna finish their garden and make up some ground. After what feels like 100 attempts, the teams finally watch the entire presentation. (Facepalm.)

On his sixth attempt, Riley makes an unbroken tile and levels up to the puzzle. Will laps DeAngelo and Chee, but Riley is first to complete the task and take off for the pit stop.

When Eswar and Aparna arrive, Aparna mouths off (understandably so!), and more or less calls the footballers dumb for U-Turning them. She tells DeAngelo to keep messing up for another couple hours. She’s pissed, but who can blame her? (I wanted her to pop off even more! We need some drama. I’m all for a Reilly sisters type of feud here!)

Chee pulls ahead by completing his tile and the puzzle, while DeAngelo finally realizes the step he’s been missing. On his 12th attempt, he gets the green light to move to the puzzle. He finishes before the brother/sister combo, but the footballers run into some crazy traffic on the way to the pit stop.

PIT STOP | First to check in are the volleyballers, who win a trip for two to Norway along with some hefty bragging rights. Will and James become team number two, while Hung and Chee check in third. Last to finish are Eswar and Aparna, and Phil eliminates them from the race.

Were you hoping for some more fireworks from that double U-Turn? Were you sad to see Eswar and Aparna go? Sound off in the Comments!