I’ll admit it right upfront: The Walking Dead: World Beyond made me eat my words. (Ketchup helped.) You may recall that after screening the premiere, I panned the second Walking Dead spinoff. And even at the end of Season 1, it could still get a little heavy-handed for my taste. But I’ll be damned if I hadn’t gotten pretty attached to the drama’s young protagonists. I even watched Sunday’s two-part finale largely from the edge of my seat. What made it so exciting? Read on…

‘NOTHING’S UNAVOIDABLE’ | In an early flashback in “The Deepest Cut,” the first episode of the double-header, Huck was urged by Elizabeth to hurry up and isolate the asset — Iris, we were led to believe — or the CR would do it for her. So Huck deliberately drove their truck off the road, leaving it with a flat that required her, Felix and the Bennett girls to trudge off in search of shelter. When walkers tangled in barbed wire happened upon them, Huck seized the opportunity to slash Felix’s leg and make it seem as if it had been cut in the scuffle. Upon taking refuge in a retirement home, she sucked up to Iris with all the subtlety of the office brown-noser. Oh, but don’t go in that particular room, Huck said. It’s… um… full of the bodies of oldies who had shot themselves in the head. Nope, not suspicious at all, that. Since there was no way that Felix could hike across the hilly terrain that stood between the gang and the facility at which the girls’ father was toiling, their guardian decided that he should stay behind, and they could pick him up on their way back to the campus colony. (As if.)

Instead, just as Iris was noticing all of the red flags that Huck was waving, Hope snuck away in the night with her, saying that Iris wouldn’t leave without Felix. Turned out, Hope had decoded the CR’s cipher, which revealed what a two-face Huck was and that everyone who wasn’t the asset was considered — gulp — expendable. While all of that was going on, Elton discovered Percy alive but barely. It was OK, said the version of Percy that was conscious, if only in Elton’s mind. He could leave the body to the walkers and save himself. Rather than do so, Elton fought the approaching empties and won. Afterwards, finding a walkie-talkie in Percy’s coat pocket, Elton managed to connect with Huck, only to have Percy knock the device out of his hand. Percy hadn’t been attacked by Silas, you see, he’d been shot — and “she’s the one that shot me.” With that, episode No. 1 concluded with Felix discovering that his gun was missing just as Hope pulled the weapon on Huck. Nice set-up! 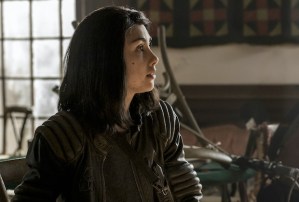 ‘YOU CAN HATE ME… AND I’LL LIVE WITH THAT’ | “In This Life” was full of flashbacks to Leo’s relationship with fellow researcher Lyla, who was apparently about as trustworthy as Huck. But she must have cared about the girls’ dad, at least a little, because ahead of Hope’s arrival at the facility, she nervously practiced the speech in which she was going to disclose that she’d told the CR what he’d said about Hope — basically, she’s a genius — and that they were about to be reunited for the sake of humanity. Toward the end of the hour, Leo stopped Lyla before she’d even begun her speech to share his suspicions about the CR military. What had become of Will’s scouting mission, for instance? And could they be sure that Dr. Abbott really left the facility to visit his sister? (Viewers know, but Leo doesn’t, that a zombified Dr. Abbott is among Lyla’s test subjects.) How could they be sure, mused the poor dupe, that the military wasn’t lying to them? He had an idea to achieve that end, but even as the season wrapped, we were left in the dark about what exactly it was.

Picking up where “The Deepest Cut” left off, Hope took aim at Huck and got her to admit that she was CR. Before the interrogation could go much further, walkers intervened, and Hope lost the firearm in the ensuing fracas. Afterwards, Huck revealed that Leo was never in danger and that the last two messages the girls had received had been from her. She’d assumed that Iris would try to talk Hope out of going after their father, then Huck and the isolated asset could have just taken off. Why did they have to make the trek at all? That was part of a master plan to get the asset to — wait for it — see the world in such a way that she understood the importance of her father’s work. (Hey, I didn’t say the show was perfect, just that I came to like it.) And all of this, Hope marveled, was about… her? “Kid,” Huck replied, “you have no idea who you are.” Folks with intellects like hers were going to be needed in the future — heck, if there was even going to be a future. The two were absolutely not cool; Hope even rejected Huck’s offer of Peeps. (That’s a major grudge right there.) But they banded together to hide when Felix and Iris caught up with them in the truck they’d repaired with supplies found in the retirement-home room that had supposedly been full of dead bodies. (Not sure, but I may have just reset my record for most exposition stuffed into a single sentence.) 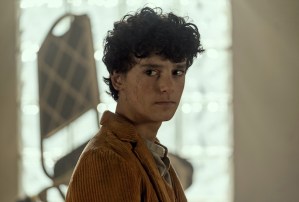 ‘YOU’RE NOT A MONSTER… YOU NEVER WERE’ | Meanwhile, because the characters on this show can’t seem to help bumping into one another in the middle of nowhere, Silas was reunited with Elton and… wait, wasn’t Percy dead? Hadn’t Silas killed him? Nope, Elton happily reported. Percy had just been almost executed by Huck. Just as the trio was about to set off to save Iris and Hope, who should roll up but the CR! The guys made it as far as the fence that stood between them and safety, but then Percy decided to play hero, staying behind since in his injured state he’d just slow them down and leave a trail of blood to boot. “No way,” Silas said more or less. “This is my hero moment.” He locked Percy and Elton on the exterior side of the gate, cut his hand and surrendered to the CR. (At least they didn’t, as I feared they would, shoot him on sight.)

Back at the house in which Huck and Hope were hiding, they were forced to reveal themselves to Iris and Felix, at which point all hell broke loose. Felix pulled a gun on his former pal, Hope blurted out that Huck was CR and that leaving was the only way that Felix and Iris would live, and ultimately, the ex-besties engaged in a brutal battle royale. By and by, Huck got the drop on Felix and would have killed him, however reluctantly, if Hope hadn’t threatened to shoot herself in the head. The whole point of Huck’s mission, Hope explained to Iris and Felix, had been to get her to the CR facility. “Turns out I’m smarter than I thought.” The situation defused, the sisters said a fraught goodbye before Huck left with the asset in tow. The following day, when Huck and Hope rendezvoused with Elizabeth’s chopper, Mommie Dearest made it clear that she knew about the “loose ends” her daughter had left untied. In the woods, Iris had no sooner gotten done telling Felix that Hope wasn’t the asset, it was the Bennett sisters together, than they ran into a whole mess of people, among them Will. The lovers had a lot of catching up to do!

So, what did you think of the finale? The show certainly ended Season 1 stronger than it began it, wouldn’t you say? Grade the two-parter in the poll below, then hit the comments with your reviews.