A SEAL Team shakeup may be looming, as Season 4 of the CBS drama addresses numerous career cliffhangers facing Jason, Ray, Mandy and others.

When last we tuned in, the action-drama had fallen two episodes shy of its planned season finale, due to the pandemic. As such, multiple careers hung in the balance, as Bravo members mulled moves that were upward, lateral or (gulp) into civilian life.

With Season 4 arriving Wednesday, Dec. 2 at 9/8c (with not one but two episodes), TVLine spoke with executive producer Spencer Hudnut about navigating the team’s potential shakeup, serving up some first-ever flashbacks, that impetuous hookup and more. 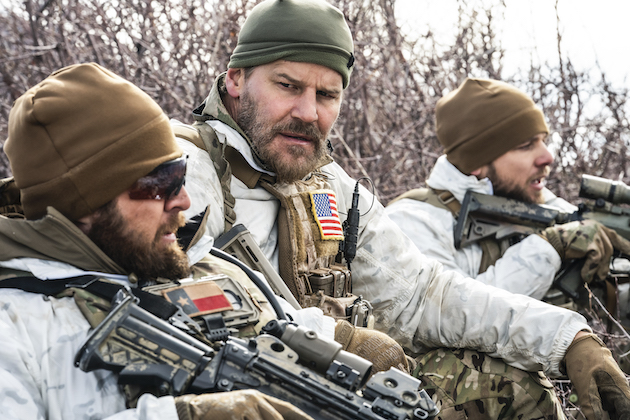 TVLINE | My understanding is that when the pandemic shut things down, you had shot two [days] of [Episode] 21 and four days on 22 — or vice versa, or something. Were you able to use all of that still?
So, we had shot actually six days of eight on 21 (which was directed by series lead David Boreanaz), and then two on 22. But it worked out perfectly where we actually got all the location stuff done that we needed to, so we were able to finish those exactly as they were written, and they are going to kick off our season. We left Bravo in the middle of deployment, right on the heels of this Al-Hazred terrorist, and we will see if they can succeed in that mission, and then we’ll get them hopefully back home at the end of the second episode.

TVLINE | Now, David had told me that you have some flashbacks in one of those?
For much of deployment, particularly after finding out that he’s hunting the son of the man he killed 13 years earlier, Jason’s really been in denial about what that means, and trying to compartmentalize and push away any questions that that might bring up in his head. But he’s going to find himself on this mission when he’s right on the heels of Al-Hazred’s son, going back to 13 years ago to that mission, and we really see — for the first time in the show’s history — Jason Hayes before he was Bravo 1. We learn how that mission was about more than just taking out a big target. It really shaped and impacted the rest of his career, and we see choices he made in those flashbacks. We’re really, really excited to unpack that.

TVLINE | After I first reported on the flashbacks, one of my readers wrote and asked if we also might see Sonny (AJ Buckley) and Davis (Toni Trucks) meet for the first time.
Unfortunately, they were not around then — but you will get a glimpse of some other teammates in their youth. 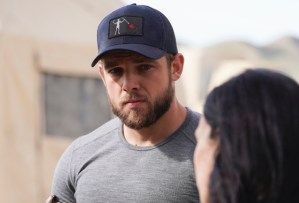 TVLINE | When we left off, Clay (Max Thieriot) was locked into STA-21, Ray (Neil  Brown Jr.) was waiting to hear on the warrant thing, Jason’s got all these devils on his shoulder telling him “it’s time to put you out to pasture”…. Will any of these up-in-the-air fates be resolved over the first couple of episodes?
As you said, most of these characters sort of find themselves at these crossroads — and that includes Mandy (Jessica Paré), who’s obviously questioning her role. So, a lot of these characters will make some choices in these first few episodes. But some of them will have choices made for them, because things will be out of their control. You know, there’s still this Marsden letter kind of floating out there….

TVLINE | I was wondering about that, yeah.
Yeah, and that’s a threat to the team. There’s this sort of mystery element of who wrote it and what will be the consequences if it was someone on Bravo Team. It’s slightly flying under the radar with the guys, but it could rear its head and really impact the team. There’s a lot that’s threatening Bravo Team as we know it, and when they get through these first two episodes, I think the audience will be surprised at what Bravo looks like. 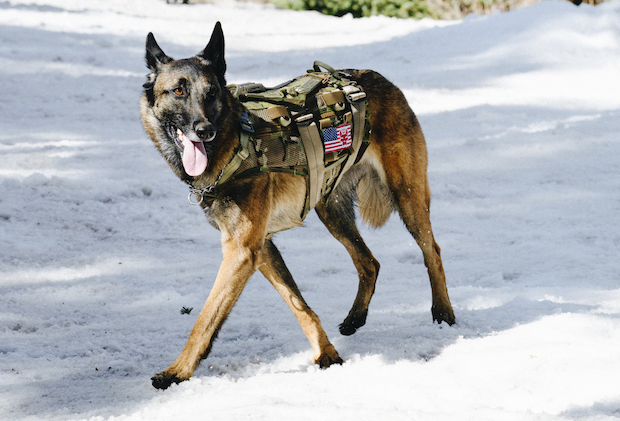 TVLINE | Another career that’s up in the air is Cerberus’.
With Cerberus, we were definitely drawing a parallel with Jason. Cerberus has seen a lot of combat, a lot of trauma, and we hinted at that on the deployment where he missed something on target once. Brock (Justin Melnick) was working with him to try to keep him sharp, but there’s always the risk that when a dog is losing its edge it could come up at the wrong time and really put the team in danger. And in a show where these operators really don’t want to reflect on all that they’ve endured, when they see it in the dog it’s a different story. They’re quick to realize that maybe the dog has endured a little too much. So yeah, like most of our characters, even Cerberus is at a crossroads this season.

TVLINE | Do you have any idea what that looks like in the real world? Like, does the dog get rotated out and placed in a good home…?
That is my understanding, and we’re dealing with it with Dita, who plays Cerberus, because Dita doesn’t know that this isn’t real combat. So to her, she’s been through three seasons and 60-plus missions. But yeah, finding a purposeful life for Cerberus is much like finding a purposeful life for any of our SEALs who move on from operating. 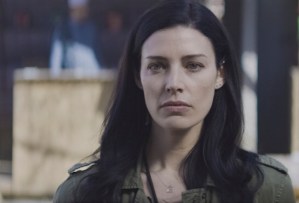 TVLINE | David told me we might surprised by the “morning after” for Jason and Mandy.
We never had the intention that that would be the last thing anyone saw for six months [due to Season 3 being cut short], so I think that [as a cliffhanger] has gotten built up maybe a little more than we intended. I think that Jason’s arrival on Mandy’s doorstep really represented where those two were after going through deployment, where she’s dealing with the loss of another CI and all the collateral damage that comes with her job, and Jason after so many months of denying that he’s nearing the end of the road, he can’t ignore these signposts anymore. I think that the two of them getting together at the end of that episode represents two people who are very close, but also trying to quiet the voices in their heads for a bit. [Since this interview, reports have surfaced that Jessica Paré will no longer be a series regular in Season 4.]

TVLINE | Will we see Emily Swallow again, as Natalie?
Natalie represents Jason choosing his future over Bravo 1, so I think there’s a hope for those who want to see Jason kind of get on with his life. Yeah, there’s hope that she may appear.

TVLINE | Is guest casting now a slightly different animal for your show, or for TV in general, during a pandemic? Do you need to pick your battles a little more carefully before bringing a new body onto the set?
This is definitely something that we’ve talked about and I think we have to address. You can’t just have people jump on a plane from New York on Tuesday and show up on set on Wednesday anymore. So, it has impacted a little bit the stories we’re telling, how we’re going about telling them, for sure. I mean, that’s the new world we’re living in, so that’s what we have to adapt to. 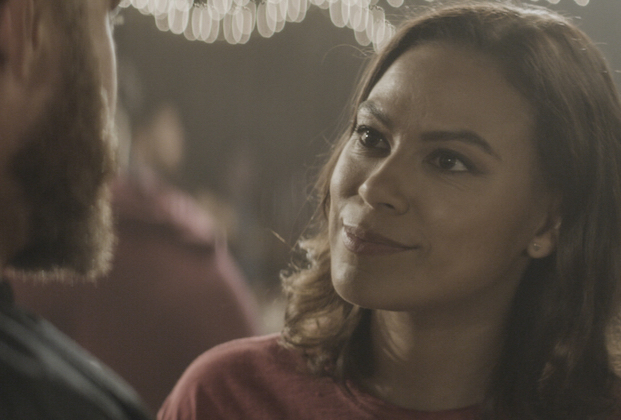 TVLINE | I have to imagine SEAL Team itself will be a non-pandemic world. Like, that’s not something you’re going to write in, right?
We talked about it and, based off also how we had to finish what we started last year, to all of a sudden be in a pandemic world felt wrong. Also, we want to give people an escape. But I do think that thematically, this is a show about honoring those who raise their hand to run into the fire first. It’s a show about people who put the greater good above their own, so I do think audiences will recognize some themes that have probably come out of this pandemic. Also, when you have a face like David Boreanaz on your show, you don’t want to cover it up. [Laughs]

TVLINE | NCIS: LA did a pretty on-the-nose arc about a SEAL accused of war crimes, a la Eddie Gallagher. I’m trying to remember, has SEAL Team ever broached the topic of guys who get caught up in the thrill of the kill and behave badly?
No. We haven’t.

TVLINE | Is that anything you have an interest in doing?
Not to get into my thoughts on that trial, but as we try to expand the world of the show, there will be a SEAL on trial this season, but that has nothing to do with that [Eddie Gallagher] case. I do think that taking the viewers on that journey is interesting because we were all were following that case. There’s a lot of compelling stuff that goes on behind the scenes, so yeah, we are going to have a SEAL Team courtroom case at some point.

TVLINE | Any last teases about the new season, what you’ve got coming up beyond Al-Hazred?
I would just say that if Season 3 was about finding our characters at a crossroads, Season 4 is really about the consequences that come with the choices that our characters make. Thematically, this is the season where we’re going to bring the battlefield home for Bravo Team, and given that this is now the 20th year of the War on Terror, we’re going to dig deeper into the toll that these wars have taken on our men and women in uniform. It’s going to be a bloody ride.