Baby Yoda. What’s the deal with that kid, right?

Ever since the first episode of Disney+’s The Mandalorian came to a most unexpected close, we and Din Djarin have had many questions about the valuable asset he tracked, found, delivered, reclaimed, and to this day has duly protected.

* What is his (and thus Yoda’s) species called?

* What is Moff Gideon’s endgame for the Child and his midichlorian-rich blood?

* And where are the rest of Baby Yoda’s kind, whom Mando now seeks?

These are all well and good queries. And who knows, maybe the back half of Season 2 (releasing new episodes every Friday) will at least brush up against a half of a half of an answer to one or more of those mysteries.

But let’s rewind a bit, to that very first episode of TV’s first live-action Star Wars series, and ponder this:

Why had the Child been secreted away — or perhaps abandoned, purposely or not — inside that Arvala-7 encampment in the first place?

That in turn begs its own follow-up questions, such as: Who was tending to the 50-year-old lad during his time there? And while the Nikto mercenaries were determined to fight off/kill any who came seeking the Child, why did none of them turn in the clearly valuable bounty themselves?

The more one revisits the few known facts about the Child’s presence on Arvala-7, the more mysterious it becomes. “Many have passed through” those parts in search of the Child, the Ugnaught Kuiil told Mando when they first met. (And all of the “many” to date had died in their quest.)

Kuiil later told Mando upon arriving at the encampment, “Since these ones [guarding it] arrived, this territory has been an endless stream of mercenaries seeking reward… and leaving destruction.”

So, “many” have come after the Child — “an endless stream of mercenaries,” in fact. That suggests Baby Yoda had been hidden behind that steel door for quite some time. And yet there were no signs the Child was being cared for, fed. (Maybe that’s why he is so damn hungry all the time!) The room was dim and dusty. And his pram was actually half-draped by a ratty blanket — not enough so that any hint of an attempt to conceal it from a passerby was being made. 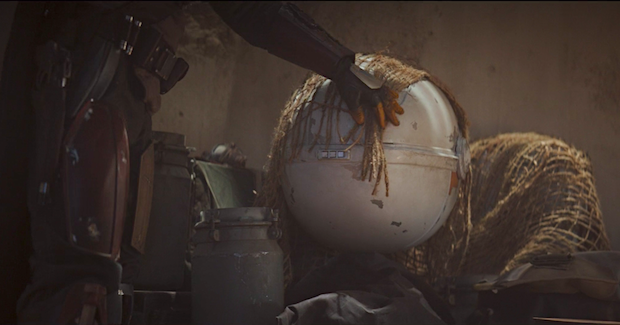 And yet there he was suddenly found, after being aggressively sought by “many.”

Did the Nikto mercs have any idea what they were guarding? (And if they had been recruited on the Child’s behalf, did Mando and IG-11 in fact whack some good-ish guys? Whoops.)

But Niktos are by and large mercenaries/enforcers. Not exactly a noble species by nature. That said, some have been Jedi — namely, Ima-Gun Di from Star Wars: The Clone Wars. So although Ima-Gun Di, for one, died decades prior, maybe another Nikto Jedi enlisted his brethren to protect this Force-sensitive creature?

What do you think — was Baby Yoda being hidden on Arvala-7? And if so, by whom? Or based on the grim environment in which he was found, had the Child been abandoned, perhaps inadvertently/in the heat of a moment?