Nothing could’ve prepared the remaining Amazing Race teams for this.

Wednesday’s two-hour showdown turned up the heat like never before, introducing the series’ first-ever mega leg, which kept teams on their toes with double the detours, roadblocks and distance. While everyone had his or her limits pushed to the max on this brutal Indian adventure, not one, but two Yields were used, launching some teams to the top and devastating another. Which duos got blood on their hands, and who ultimately was eliminated? Let’s take it from the top.

AND THEY’RE OFF | The teams’ next destination: Hyderabad, India. Hung and Chee tell us they’re done helping DeAngelo and Gary, but the footballers are still banking on the security of the alliance. Meanwhile, Eswar and Aparna, who were born in India before moving to the United States as children, are feeling pretty confident about possibly having the advantage on this one. The brother/sister combo find their clue first and learn they must smog-test three rickshaws before moving on. Not only must teams flag the rickshaws off the street, but they must also enter the vehicle’s details and test its emissions in hopes of getting approval from a smog technician.

DETOUR | Eswar and Aparna finish first and must then choose between delivering food orders or cracking a number puzzle. Since the siblings are both software engineers, they choose numbers, and are followed by Will and James, and the footballers. “This challenge was meant for us,” says Aparna, but is she speaking too soon?

On their way to the detour, Riley and Maddison vent their frustration about DeAngelo. “There’s been a lot of mutual help in our alliance with Chee, Hung and the boyfriends. Whereas with DeAngelo, there’s been a lot of take, take, take… they’ve almost been withholding information that could potentially help us.” Like Chee and Hung, these two seem over it, and refuse to help the footballers going forward.

As the volleyballers make their way to the detour, the footballers finish up and… how in holy hell are Kaylynn and Haley lost again! How is it possible that every. single. taxi driver they snag, regardless of what country they’re in, has no idea where to go? It’s been a rough Race for these two.

The boyfriends crack the code first and retrieve the next clue. At the next marker, teams have the option to use their Yields, and the guys pull the trigger on the sisters, who are still aimlessly driving in circles somewhere. (Was this a waste of a Yield? Why not pull the trigger on a bigger threat like, say, the footballers?) 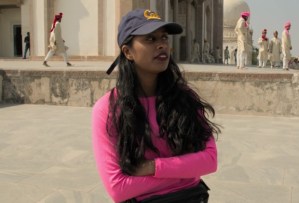 ROADBLOCK | Teams must use an augmented reality interface to travel through a digital world and find three distinctive turbans. Then, they must find real men who are wearing the same headdresses. Eswar and Aparna and Gary and DeAngelo begin the roadblock, while the Blonde Bandits join Hung and Chee (who change detours) on the food-delivery task.

The two pairs of athletes destroy the roadblock and are off, but Hung and Chee make their deliveries and catch up to the pack. The first hour ends with the sisters finding out about their 20-minute delay, and since it’s a mega leg, we’re rolling right on through to: another detour!

DETOUR | This clue cannot be any more vague: “This or That.” Okaaay. For “This,” racers must push a cart of bracelets to a nearby store, and find the same set that a bride is wearing.

Eswar and Aparna select “That,” which requires teams to make molds of dentures, and then polish another pair to fit into a patient’s mouth. (Real talk: This is all kinds of gross, and I’d be OUT of there, ASAP!) While Chee and Hung bite down on “That,” the footballers and the boyfriends continue their search for needles in a haystack.

Riley and Maddison pull ahead, arriving at a palace where they hop a horse and carriage with some local socialites. At the leg’s second Yield op, they target Kaylynn and Haley, hoping to give their struggling alliance members, Hung and Chee, extra time.

ROADBLOCK | Teams must recreate place settings — including a fancy, folded napkin — on the palace’s 108-foot-long dining table. The items must be arranged down to the centimeter in order to pass the task. The volleyballers and the boyfriends decide not to reveal the ruler tip to Gary. “Now is when the Final 3 alliance with the beards, and Hung and Chee is going to start coming more towards the front,” says James. “The Mine 5, as of today, is officially dead.”

The sisters finally finish their dentures, and on the way out, one tells the camera, “If someone else Yields us, I’ll f–king slaughter them!” Welp…

PIT STOP | Riley and Maddison are the first to finish this super-ultra-mega-leg and land on Phil’s mat, winning a trip for two on a seven-day Caribbean cruise! Will and James clock in second, while Gary and DeAngelo place third. Despite their streak of luck this season, it has, indeed, run out: Kaylynn and Haley arrive last, and are eliminated from the race.

The sisters are finally gone! Will you miss them? And what are your thoughts on Gary and DeAngelo? Sound off in the Comments below!