Peacock’s Saved by the Bell revival stages a Bayside reunion 27 years in the making.

“We have a big homecoming episode that really delves into [those old friendships],” showrunner Tracey Wigfield tells TVLine. “They’re all reunited again, and they work through some of their issues that have come up over the last 30 years.”

Echoing Wigfield’s tease, Berkley Lauren adds, “There’s joy, there’s tension, there’s all of the things you’d think of when siblings get together [after some time apart].” 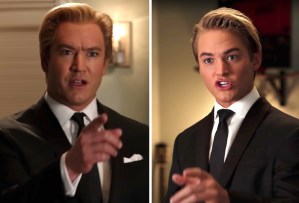 The reunion episode also explores the father-son relationship between Gov. Morris and Mac, who aren’t especially close. “I don’t think Zack is there as much as Mac wants him to be,” Mitchell Hoog, who plays Mac, tells TVLine. “With my dad, a lot of it is the mystery of him. Due to him being governor, I have to take what he is trying to give me [as a dad] and use my imagination.”

The added pressure of being the governor’s son also takes its toll on the teen, who is desperately trying to follow in his father’s footsteps. “A lot of it is living up to name ‘Morris’ and living up to that legacy within Bayside, which I am very hard on myself on,” Hoog says.

Viewers won’t have to wait as long for Jessie and Slater’s reunion, which comes just minutes into the pilot episode. “They’ve maybe lost touch for a little bit, and now they’re getting to revisit one another as adults,” Berkley Lauren says. “With that history, there’s that comfort, that ease that you have with people that you grew up with. They have that, and there are sparks.”

What are your hopes for the big Saved by the Bell reunion? Let us know in the Comments!