CBS’ NCIS marked its 400-episode milestone with a look at the case that first introduced Gibbs to Ducky — and then most unexpectedly resurfaced four decades later.

Starting off in 1980, we saw how a vehicular accident left dead a Navy accountant who seemingly had made an unauthorized withdrawal to the tune of a sack full of money (which also contained a gun). And yet the victim hadn’t been killed in the accident, but via an earlier stabbing. Oh, and there’s a body growing restless in his car trunk — that of one Sgt. Leroy Jethro Gibbs.

Meanwhile in the “present”/December 2019, a plot to entice Gibbs — who’s a bit prickly, due to his and Shannon’s wedding anniversary — to join in a night out celebrating the 20th anniversary of McGee deciding to be an NCIS agent is interrupted by the discovery of a body in HQ’s basement. The deceased, Special Agent Ronald Calloway of the Carolina office, doesn’t exist; he sneaked in with bogus credentials the night before, and wandered around before dying of asphyxiation next to a server that connects all the NCIS databases.

McGee determines that “Calloway” suffered a severe asthma attack that had been triggered by mold spores. When he then reveals that the man’s name was really Maurice Zucado, it rings a big ol’ bell with Gibbs, who remembers him as a “really bad guy” from “a whole family of bad guys,” having had a run in with Maurice’s cousin many years ago.

That cousin, we see in 1980, was Ringo Zucado aka the Navy accountant who had thrown Gibbs into his car trunk. The NIS agents working the case ask why Gibbs, who had been accepted to sniper school, was in town, and he explains that he came for a friend’s wedding, which he plans to attend with his girlfriend Shannon. He was out shopping for a suit when Ringo sneaked up on him and jabbed a gun in his side. Just then, the driver of the car that hit Ringo shows up in the squad room… and it’s young Dr. Donald Mallard.

As Gibbs and the doc become fast friends and spend several days hitting pubs, the latter realizes that Gibbs has ended things with Shannon. (Worse, he did it over the phone!) Just then, younger Jonny Zucado and his cousin Maurice confront the gents, taking them to a hideaway for a beating. Jonny wants to know if they told the NIS agents anything Ringo revealed, and Ducky explains that Ringo died long before the cops arrived on the scene. Deeming the men of no value now, Jonny puts a gun to Gibbs’ head, only to be warned that the Marines will never stop looking for the killer of one of their own. Later, at Ducky’s place with the nice wainscoting, he and Gibbs surmise that there must be a mole at NIS — and Ducky has an idea who it is. 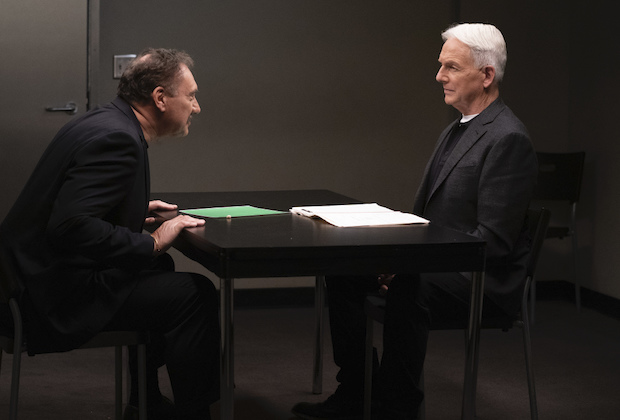 Back in the present, Gibbs informs Ducky that the Zucados are back. But what was Maurice up to in the building’s bowels? Gibbs says that Maurice’s cousin Jonny would know, but McGee reports that the family boss is in hiding. Luckily, the pacemaker-wearing Jonny checks in with his doctor, so the team is able to find him and bring him in. Jack and Vance watch as Gibbs reunites with the “one that got away” in the interrogation room. Jonny tells Gibbs he has no idea what Maurice was up to, nor can the feds hold onto him due to charges of bribing a government official that have suddenly been dropped. (“You couldn’t get me 40 years ago, and you ain’t gonna get me now,” Jonny gloats.) Indeed, the star witness in the bribery case against Jonny soon turns up dead.

Gibbs is anxious to chase the case, and a wary Vance allows it, provided his agent cools off a bit. Similarly worried about Gibbs, Ducky suggests to his longtime friend that he is letting an old grudge get under his skin — and perhaps  said grudge is with Ducky himself, seeing as back in the day he nudged Gibbs to make things right with Shannon, and thus set himself up for double the tragedy down the line. But Shannon and daughter Kelly “were the best thing that happened to me,” Gibbs tells Ducky. “I don’t blame you I owe you.”

As he and Jimmy examine the murdered bribery witness, Ducky mentions how would have given up on treating living patients, if it had not been for the Zucados. Cue the next flashback to 1980, where Ducky asks the NIS ME to show him Ringo’s body — and he notices the distinct freckling that is indicative of LEOPARD syndrome. Ducky had noticed the same freckling on one of the construction workers in the soon-to-be-orange NIS squad room. And if said guy is related to the Zucados, he must be the mole.

Back in the present, Kasie reports that Maurice’s charred notebook contained a map of NCIS, written by an Emilio Zucado — aka the construction guy from 40 years ago, Brought in for questioning, Emilio sings like a canary, explaining how Jonny embedded him with the painting crew to gain access to an evidence locker, where the key that was found on Ringo back in the day was stored. But upon pinching the key, emilio realized the feds were onto him, so he hid it inside the wall. And that is what Maurice had come looking for in 2019. McGee saws a hole in the wall and finds the card key, which opens a Swiss deposit box into which Ringo had hidden the millions he embezzled from the Navy. He was making a run for it when he carjacked Gibbs and stuffed him in the trunk.

Back in 1980, Ducky prepared a “going away” dinner for sniper school-bound Gibbs, though Jethro takes umbrage at his friend’s plan to cook the steaks in an oven. Grilling them in Ducky’s fireplace instead, Gibbs invites the doc to join NIS and maybe one day get a second chance at the Zucados. Ducky in turn has advice for Gibbs, suggesting he is afraid of not finding, but losing, love. “Love is scary, but it can’t be optional,” Ducky insists. Picking up on Ducky having loved and lost himself, Gibbs asks, “What was her name?” Maggie, Ducky shares, “but there are some stories even I won’t tell.”  He instead directs Gibbs to Episode 12×03, then urges him, “Don’t make the same mistakes I made,” before the men concur their paths will hopefully cross again one day.

Returning to the present, Gibbs and Torres arrest Jonny — not for bribery, but for Ringo’s 1980 murder. (They had exhumed the body and found Jonny’s DNA found under his fingernails.) “Reunions are fun, aren’t they?” gloats Gibbs, echoing Jonny’s taunt from earlier.

The 400th episode closes with Gibbs in his basement, regarding an old photo of young him and Shannon. He then flashes back to 40 years prior, where he hopped on a pay phone to call Shannon, saying, “I’ve been doing a lot of thinking. And I’d like to ask you a question before I leave — the kind of question a gentleman doesn’t ask over the phone.” And as young Gibbs hops on a five-hour bus ride to see Shannon, his older self rings McGee to see if the gang is still out having drinks — and if he can join them.

What did you think of the episode “Everything Starts Somewhere”?