The Flight Attendant served up an early (and free-on-YouTube!) landing ahead of its official Thanksgiving Day premiere on HBO Max. Does the dramedic thriller offer a first-class diversion?

Based on the 2018 novel of the same name by Chris Bohjalian, the series follows Cassie Bowden (in a showstopping performance by The Big Bang Theory’s Kaley Cuoco), a flight attendant for an international airline who takes full advantage of her exotic travel opportunities. Simultaneously a mess and in complete control of her life, Cassie sets off on a flight to Bangkok, Thailand, expecting to party it up before returning to New York for a visit with her brother (Grey’s Anatomy’s T.R. Knight) and nieces. 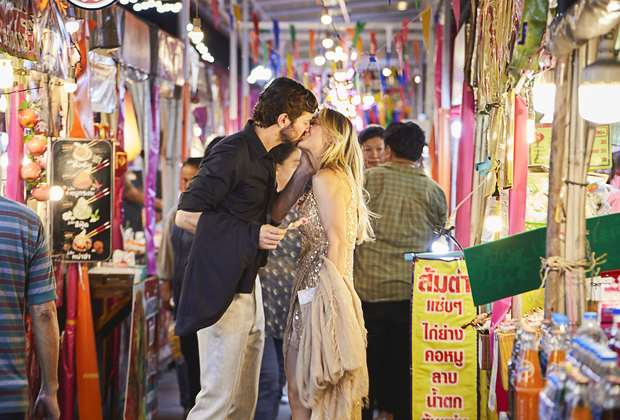 A TALL, DARK STRANGER | While in the air, Cassie hits it off with Seat 3C aka Alex Sokolov (Game of Thrones’ Michiel Huisman). After a fun romp in the first-class bathroom, Alex asks her out on a proper date. The two explore the city’s sites before settling in Alex’s hotel room for the night. However, this perfect date experiences some unexpected turbulence when Cassie wakes up with a major hangover… and Alex’s dead, bloody body beside her.

Cassie immediately rushes to the phone to report Alex’s death. However, a panic attack and a brief phone conversation with her friend Annie (Girls’ Zosia Mamet) about the case of Amanda Knox convince her otherwise. She cleans up the scene and heads to her next flight, which is taking her to Seoul, South Korea.

NEWS TRAVELS FAST | Back in Thailand, a mysterious woman (Chilling Adventures of Sabrina’s Michelle Gomez) calls the hotel to ask them to check on Alex. Room service finds the body and alerts the local officials, who subsequently notify the U.S. State Department and FBI. By the time Cassie has landed in Seoul, the news is already over the web, causing her to panic even more — and that is after her awkward interactions with the flight’s air marshal and fellow flight attendant Megan (Rise‘s Rosie Perez).

At the Seoul hotel, Cassie’s memory starts to come back to her — juxtaposed with some shots of her supposedly as a child standing over a dead deer. After realizing she lost her ID card, her mind “transports” her back to the Bangkok hotel room, where she tries to piece together the night with her subconscious’ version of Alex. However, this only leaves her with more questions.

WELCOME TO NEW YORK | Cassie finally completes the third leg of her trip, landing in New York City. But her dreams of putting this all behind her are dashed when the FBI brings in the flight crew for questioning. Cassie unsuccessfully tries to flee the airport, raising the suspicions of Agents Kim Hammond (Greenleaf’s Merle Dandridge) and Van White (Counterpart’s Nolan Gerard Funk). While being interrogated, Cassie is again “transported” back to the hotel room and remembers that another person was with her and Alex the night before he died. Who was it, what do they know about Alex’s death?

What did you think of the first leg of The Flight Attendant? Episodes 2 and 3 arrive Thursday on HBO Max, followed by weekly releases.