It’s safe to say that I Hate Suzie‘s very troubled lead has officially blown a fuse.

By the end of the penultimate episode, Suzie had told off a snobby playwright, attacked an unsuspecting man in a car and discovered that Carter lied about telling his wife about their affair. To say that Suz is stressed out is beyond an understatement.

Now that she’s braved most of the stages of grief, will she be able to rise to the ultimate challenge of “Acceptance?” Let’s recap.

We find Suzie recording voiceovers for commercials, but she struggles to find the right vocal warmth. When she’s told she sounds sad, our poor protagonist (are we even calling her that?) seems surprised to learn that people can read the sorrow all over her.

The X-Rated photos of her and Carter have landed in the papers, and she’s dejected as she flips the pages. “Maybe I am insane. Maybe I’m a monster,” she ponders. Oh, and that meltdown? That’s circulating the internet because the driver of the car obviously recorded it.

Naomi calls, pretending like their argument never happened, and the two meet at a hospital where Suzie has an appointment to meet a terminally ill child. Suzie gives the sick child a gift, signing autographs and taking photos. Cob says she does things like this to boost her ego. “Maybe I do just want to seem like a good person, but how is that really different from being a good person?” she asks via narration. The visit sends her on a total existential crisis. She fears she’ll die without ever knowing who she really is. 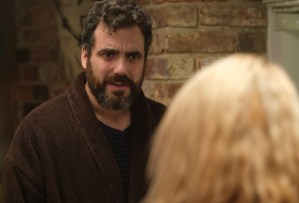 Cob tells her a story of how a student of his came into his office acting all sexy-like, but when he opened the door, she ran off. Suzie realizes from his story that she was wrong: He’s not having an affair, after all. Despite knowing the truth, she calls him out for having one anyway, name-dropping the student even though Cob never specifically mentioned the girl’s name. He calls Suzie crazy, telling her she needs to seek therapy because she doesn’t know who she is. He tells her she’s not a good person and degrades her. She verbally agrees with him, but the voice inside her head that we hear disagrees completely. “I love you like a member of my family that I hate,” she says. But not to Cob, of course.

“I think I’ve spent so much time living from other people’s perspectives, and I think that has to stop.” This part she does say out loud. “I don’t want to be in a relationship with you, but I worry that will ruin your life and I worry that will ruin Frank’s life, too,” she mutters through tears. “The truth is I don’t love you, Cob, but I think that’s fair enough considering what you’re like.” She finally accepts that it’s over, and tells him she’s leaving.

After hearing her voiceover commercial from earlier, Suzie seems to have an epiphany and takes a pregnancy test in her car. The results are pretty darn clear from the decibels emitted when she screams, “F–K!” She calls Cob, but he says he’ll never forgive her. Oh, and he plans on making her life a living hell, too.

Again in a voiceover, Suzie tells herself, “No one is coming to rescue you,” as she stands on a bridge overlooking some water. A couple asks if they can have a picture, to which she coldly replies, “No,” only to realize they want one taken of themselves. She apologizes, and the couple immediately recognizes her from her singing competition as a teen. As they bid her farewell, she asks if she can go home with them. “I haven’t gotten anywhere to go, and I just need somewhere to be,” she says, forcing a laugh with tears in her eyes.

Suzie leaves us by repeating a few of the lines from her earlier commercial: “Every home should feel safe and warm and supportive. Everywhere is home.”

So tell us: Do you hate Suzie, or do you feel for her? Grade the season finale, then tell us your thoughts in the Comments!