Near the end of Sunday’s Fear the Walking Dead midseason finale, we were treated to the strangest of sights — and that’s really saying something, considering that already in the episode, we’d gotten a gander at a would-be Dr. Moreau’s extra-creepy walker art. Strand was staring down Morgan and Alicia, and neither side was willing to back down. The point of contention? As with so many things in Season 6, the person to which all roads lead: Dakota. And from there, things only escalated. Read on, and I’ll explain how.

‘YOU ARE A FOUNT OF SISTERLY LOVE’ | Early on in “Damage From the Inside,” a convoy of Rangers surrounding Dakota was attacked, giving her the perfect opportunity to try to escape once more from Virginia’s embrace. When Strand realized that his boss’ sister had gone AWOL, he desperately walkie-talkied Alicia for help. And when she got over pouting about being sent away by her friend, she agreed — but not to assist Victor in any way, she explained to Charlie, to see if whoever hit the convoy might help them get away from Virginia. As Alicia and Charlie approached what looked to be a hunting lodge, they were greeted by some extra-gnarly walkers, one of which I swear was made up to resemble the Creature From the Black Lagoon. 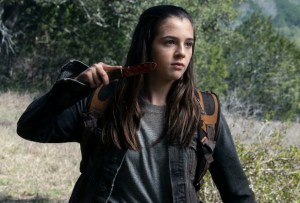 ‘IF I WERE KIDNAPPING SOMEONE, I’D GO THERE’ | While Charlie stood guard outside, Alicia entered a home that could’ve been decorated by Norman Bates, there was so much taxidermy wildlife around. (Shudder.) After spying a chap whose name we’d soon learn was Ed strategizing the best way to affix antlers to a walker in Ranger garb, Alicia found herself knocked out by the same fellow. When she awakened, he explained that the revamped walkers were designed to scare people away. As if walkers alone weren’t scary enough. Already at the lodge, Dakota was as happy as a clam, listening to old records, sharing family secrets (Virginia killed their parents) and playing chess with Ed, even though he had stranger danger written all over him.

’NO QUESTIONS ASKED’ | Making an excuse to slip away for a moment, Alicia discovered that Charlie had made her way inside. And she’d brought valuable intel: While Alicia had been out cold, Ed had boarded up the place like he was about to shoot a remake of Night of the Living Dead. After Charlie went back into hiding, Alicia was caught snooping around and blabbed to Ed that Dakota was Ginny’s sister, so he had to let them go… or, you know, else. As you wish, he replied. They could leave in the morning. Alone with Alicia, Dakota agreed to go… but not back to Lawton. Not a problem, Alicia assured her. She had somewhere else in mind. Later, Alicia quietly commandeered Ed’s radio to offer Ginny a trade: her and Charlie’s freedom for Dakota. It might’ve worked, too, had Ed not been mad as a hatter… 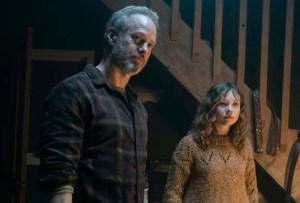 ‘I’M BRINGING THEM BACK, ALL MY CREATIONS’ | In the night, Ed cranked up his outdoor stereo to draw to the lodge all of the walkers that he’d rejiggered. (Really, they should’ve been called loiterers since they didn’t seem to have been in any hurry to walk away.) Um, why was Ed doing this? He was making the place safe, he said. He was protecting Alicia and Dakota the way he hadn’t been able to protect his late wife and daughter from Ginny’s Rangers. After Charlie came to the rescue, knocking out Ed with the same drug that he’d used to put Alicia to sleep, he quickly awakened (d’oh — the teen had missed a vein). In the ensuing scuffle, Ed wound up being impaled on an antler. But, since he wasn’t really such a bad guy, he’d buy the young women time to make their escape. Oh, and another thing, he told Alicia. Rangers hadn’t actually killed his family, it had been a walker he’d been working on. “I created them,” Dr. Frankenstein said, “but I couldn’t control them.”

‘IT DOESN’T WORK IF IT’S NOT ALL OF US’ | As walkers broke through the front door, Ed served himself up to them like a bonkers entree. Then, oddly, they started wandering off. What the… ? Oooh, they were being drawn to the bright lights and noise of Morgan’s arrival. (These people are crazy good at finding one another in the middle of nowhere, aren’t they?) Needless to say, Alicia was shocked — and thrilled — to see her old pal. In the morning, she revealed to Charlie that she was going to take her to the stadium and hopefully clear it. Was she really gonna turn over Dakota? Hmm. Morgan wanted to use Ginny’s sister to trade for their people. Not very heroic, he knew, but “we’re all gonna have to do things we never woulda done before.” Just then, Alicia realized that he was the one who’d killed Dakota’s convoy. Yikes! 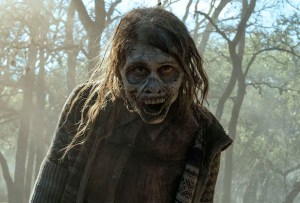 ‘WHICH SIDE OF THIS ARE YOU ON?’ | Morgan had given the Rangers an option, he insisted to Alicia. But they’d chosen Ginny. He hadn’t blown up Tank Town, though, and didn’t know who had. Reeling, Alicia informed him that she couldn’t reunite their group, not his way. So he promised to “do whatever it takes to get us all” to their new home — even Dakota. As they left, they were confronted by Strand, leading to the aforementioned strangest of sights. Weapons were drawn, pulses raced, but in the end, Victor let his (former?) friends go with warning (he wouldn’t be able to protect them) after warning (they were messing up everything). Back in Lawton, Strand not only filled in Ginny but pledged his allegiance to her. As a result, she revealed to him what “the big show” was: She had a preggers Grace locked up — and now wanted everyone else from the Gulch brought to her, too. If Morgan wanted to play hardball, she’d play… um… harder ball.

So, what did you think of the midseason finale? Were you starting to wonder if we’d ever see Grace again? Grade the episode below, then hit the comments.