The Crown‘s Princess Diana and Margaret Thatcher both find themselves betrayed by those closest to them as the Netflix royal drama wraps up Season 4 — are their reigns over already?

The finale begins with Thatcher’s conservative allies openly revolting against her in Parliament, with Sir Geoffrey Howe resigning and condemning her “finger-wagging” on the way out. She meets with Elizabeth and only wants to talk about the brewing crisis in the Gulf, but Elizabeth brings up Howe’s resignation and asks if she expects a leadership challenge. Thatcher dismisses it as just “petty rivalries and resentments,” but she narrowly survives a vote, and when she confronts her fellow conservatives, they all claim to support her… but they warn her that the numbers are against her (“Perhaps if your methods were less confrontational…”) and advise her to step down before she’s forced out.

Diana, meanwhile, is feeling a similar squeeze: Charles knows she’s been sleeping with her riding instructor James Hewitt again and wants to move forward with a separation. The unhappy couple takes an awkward trip to William’s school to watch him play rugby, and Charles makes it very clear he doesn’t want Diana taking a trip to New York she’s been planning. (They glare at each other across a long table while their many advisors argue it out.) “I’m in hell!” Diana complains, but she does manage to escape to New York, where she’s greeted by adoring fans everywhere she goes. (She’s still making herself throw up, though.) 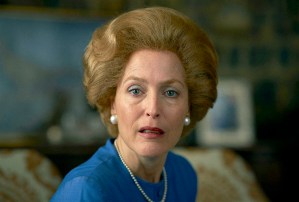 Faced with imminent expulsion, Thatcher reaches deep into her bag of tricks for a last resort: She informs the Queen she intends to dissolve Parliament (!) and wants her support. Elizabeth reminds her that just because she can do something doesn’t mean that she should, necessarily: “Perhaps the time has come for you to try doing nothing for once.” Thatcher won’t do that, though; the job of Prime Minister is her one true passion, and she can’t stand to see that taken away from her. But she does eventually say goodbye to 10 Downing Street, and the press cameras catch her face crumbling as she drives away. In their final meeting, Elizabeth offers her sincere sympathies… and awards her the prestigious Order of Merit as a token of her admiration. After she pins it on her chest, Thatcher takes a solemn knee before her queen.

While in New York, Diana sets off a media frenzy when she visits a Harlem hospital and hugs a child with AIDS, with the locals raving about her on TV. Camilla sees all of this and tells Charles he can’t break it off with Diana; it’ll turn into a popularity contest, she knows, and “I will lose.” A furious Charles takes out his frustrations on Diana when she returns, referring to her New York trip as “calculated vulgarity.” They end up screaming at each other, with Charles blaming her for Camilla’s wounded feelings: “If you hurt her, you hurt me.” It’s clear who the most important woman is in Charles’ life… and it’s not Diana. Later, she sits down beside the toilet — but this time, she doesn’t throw up. 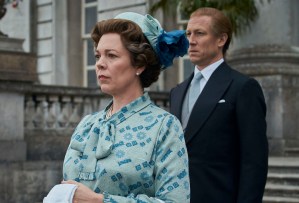 It’s Christmas time at Balmoral, and Elizabeth and Philip welcome their family, including an uncomfortable Diana. When she tries to pull Elizabeth aside for a heart-to-heart, the Queen sidesteps her to feed her corgis, but she’s soon cornered by her son Charles. He insists he’s done his best to salvage this marriage, and now he’s just suffering. Elizabeth unloads on him, scolding him for whining, calling him and Diana both “spoiled” and “immature,” and forbidding him from even thinking about divorce or separation. A chat between Diana and Philip doesn’t go much better; she now sees the family as “a cold, frozen tundra,” and he cautions her that if she tries to leave, “it won’t end well for you.” Besides, he says, everyone in this family is lost and lonely… except for the Queen. The season ends with the whole family gathering together for a festive holiday group photo. Diana can’t manage to put on a smile, though.

Alright, The Crown fans: Give the finale — and Season 4 as a whole — a grade in our polls, and then hit the comments to share your thoughts.