The following post contains spoilers for Friday’s episode of The Blacklist.

Liz Keen blew right past the “denial” stage of grief on Friday’s Blacklist, making herself quite comfortable in the “anger” phase instead.

The game-changing hour — which also served as the last new Blacklist episode until Jan. 22 — found Red shooting and killing Katarina Rostova, despite Liz’s firm stance that her relationship with Red would end permanently if he harmed her mother at all.

But when Katarina got some long-awaited answers from Dom (who also, sadly, died during the episode), Red saw no other option than to murder Katarina; she had discovered that Red is (allegedly) the elusive KGB mole known as N13, and he also (allegedly) possesses the Sikorsky Archive. With that information, Katarina planned to go to the Townsend Organization — the one that put a bounty on her head years ago — and prove her innocence for good, but Red intercepted that move before she could make it.

As executive producer John Eisendrath tells TVLine, the plan to kill off Katarina — who is really dead, he says — was originally intended to end Season 7 last spring. But when the coronavirus pandemic halted production, forcing Season 7 to wrap a few episodes early, her death was moved to the current eighth season.

“What we lost in not being able to have the end to Season 7 that we envisioned, we gained back in having such an adrenaline-filled beginning to Season 8,” Eisendrath says. “We wanted to push Liz and Red apart to begin Season 8, and nothing would do that as well as killing Katarina immediately after Liz decided to side with her against Red.” 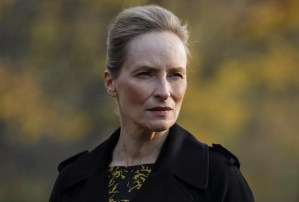 Halfway through Friday’s episode, Liz reminded Red that if he were to kill Katarina, “we’re done. Whatever this is, whatever relationship we had or have, will be over.” In response, Red merely put on his hat, stared at Liz for a moment, then left to commit the very act she’d just warned against.

“What Red absolutely won’t abide is someone he can’t trust knowing certain truths he won’t share,” Eisendrath explains. “Once Dom told Katarina those truths, everything changed. Suddenly, killing her was worth the damage it would do to his relationship with Liz.”

And Liz’s reaction upon witnessing Red shoot Katarina — “You’re never going to get away with this!” she screamed as Red was whisked away by associates — is a threat she intends to fulfill, the EP says.

“Liz and Red are going to war,” he confirms. “The death of Katarina makes Liz more resolute than ever about getting answers to questions she’s been asking for seven years. She’s willing to burn every bridge and cross every line in search of the truth. Her resolution, plus all she’s learned from Red over the years about thinking like a criminal, makes her one of Red’s most formidable adversaries.”