Believe it or not, the tiger on a walkabout in Thursday’s Station 19 actually wasn’t the most dangerous thing in the episode. That would have been Vic’s temper, which she found impossible to mind after learning that Dean had broken up with Sasha. In other words, he’d basically made his bestie walk the plank off his houseboat for a temporary rando. Elsewhere in the hour, Andy got reacquainted with her estranged family, Sullivan got a sponsor with a familiar face, a newish couple took a big step in their relationship, and did we mention that there was a tiger on the loose? Because there was. Read on, and we’ll tell its tale.

‘DID WE JUST INVENT A NEW CORONA HUG?’ | As “Wild World” began, Andy enjoyed a socially-distanced reunion picnic with her aunt and uncle and cousin Michelle. Tired of being angry, Herrera asked her tia about her mother. Elena was very much like Andy, Sandra replied. “You have her good stuff [but not the bad]. Luckily, the rest comes from your papi.” Later, Andy couldn’t help but ask… why hadn’t anyone told her about her mother? Michelle had tried, she recalled. As a kid, she’d blurted out to her cousin that they’d just seen her “late” mom. Pruitt had hit the roof, and after that, they’d had to stay away. They hadn’t agreed with his decision to keep Andy in the dark, Sandra noted, but they nonetheless had to abide by it (and apparently lovingly stalk her all these years).

Meanwhile, Sullivan attended a virtual meeting at which he… offered up next to nothing. Afterwards, Amelia advised him that he’d get more out of the meetings if he put more into them and encouraged him to get a sponsor. Um, wasn’t that what she was? God, no, she laughed. She was his doctor. But it seemed that she had an excellent sponsor in mind, because toward the end of the hour, Robert received a call from Richard. When Webber suggested they do some steps, Sullivan balked — he wasn’t crazy about talking about his feelings. So Richard eased him into it by going first. “You wanna hear about the time I walked into the O.R. drunk?” he asked. C’mon, who wouldn’t wanna hear that story? 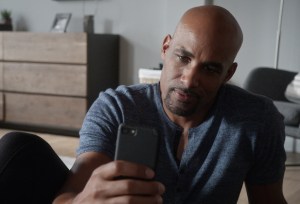 ‘SHE HADN’T HAD BREAKFAST’ | At the firehouse, Jack took a good ribbing about Inara, who he insisted was not his new boo. “She feels more like a sister,” he said. Even though she certainly didn’t look at him the way a sister would. When Maya reminded him that his choice of lovers often had “catastrophic results for the rest of us,” he reassured her that he was trying to do things differently this time around; Inara, not to mention Marcus, had been through enough. In the field, Ben and Travis treated an old woman named Yvonne who looked like she’d been attacked by Wolverine but had actually been mauled by Lorelai, the tiger she’d rescued from a roadside zoo. The same tiger that was now roaming the streets of suburban Seattle.

In search of Lorelai, Vic opened up to Jack about why she was so, so angry with Dean. “I thought Miller and I were ride-or-die, give-you-my-kidney friends,” she lamented. Guess not. If it made her feel any better, Jack would give her a kidney. In another fire truck, Maya sighed to Dean that being separated from Carina was killing her. But what was the option? Quarantining together was tantamount to moving in together. That seemed a bit… extreme. His advice? Be clear about her intentions. He hadn’t been clear about how long he’d wanted Vic to stay at the houseboat, and she’d wound up falling in love — with the houseboat, that is, and Pru. And now look at the hot mess that they were. 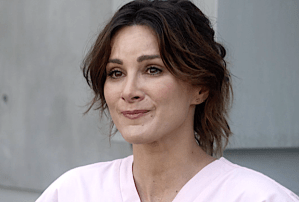 ‘ARE WE ALLOWED TO YELL AT DEAD PEOPLE?’ | After Yvonne died before Ben and Travis could get her to Grey Sloan, Montgomery wondered aloud if Lorelai had meant to attack her, if she’d just been biding her time, waiting for the right moment to exact her revenge for being kept tied up in a backyard. Given how fired up his pal was, Ben had to wonder if this was really about the tiger. “It is never about the actual tiger with me, Warren,” Travis replied. “That is rule No. 1.” (The tiger is definitely Travis’ best metaphor since “my pet rabbit,” no?) Finally, he revealed to everyone’s firehouse “Dad” that he’d spotted his homophobic actual dad on a gay hookup app.

While in the ambulance bay at Grey Sloan, Ben also ran into Carina, who was reeling from the loss of her third mother in a month. And because of COVID restrictions, she’d died alone. And Carina was going to go home and be alone. Uh, why? asked Ben. She could hardly run to Maya since he and Miranda were staying apart, she argued. Yeah, he replied, but Carina doesn’t have kids or a heart condition or OCD. So “what the hell is the point of finding your person,” he mused, “if you don’t get to weather the storms together?” Good talk, Pop! Back at the firehouse, Vic had no sooner lit into Dean anew than into the barn wandered Lorelai. Before we knew it, Vic was in the barn, too — oops. 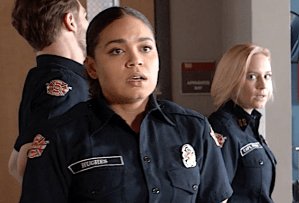 ‘SHE CAN’T HAVE ORANGE FOODS AFTER DARK’ | Quick-thinking Dean distracted Lorelai with slabs of meat, allowing Vic to get to safety. Once they were in the same room together, she threw her arms around him, social-distancing be damned. “I got you, Hughie,” he told her. It wasn’t the “I love you, Hughie” that I’m so looking forward to, but it was something. As the episode drew to a close, Carina surprised Maya in her office and received an invitation to move in together. Funnily enough, Carina had come by the firehouse to issue the same invitation to Maya. And all was right with their world. Well, aside from the pandemic. But they were clearly going to make the best of that, too. “How,” Maya marveled, “do you make even nasal swabbing sound sexy?”

What did you think of “Wild World”? Is the idea of a Dean/Vic pairing growing on you, or is it just me who’s shipping them? And reluctant as Ben may be to be everyone’s dad, the role suits him, no? Hit the comments.