If Grey’s Anatomy’s Meredith had realized that all she had to do to be reunited with late husband Derek was collapse in a heap, heck, she might have done it years ago. Since last week she discovered what — and who — awaits her on “the other side,” she was forced to admit in Thursday’s episode, “I’m afraid if I fall asleep, I won’t wake up.” Were we really at risk of losing Grey to the coronavirus? Read on and find out.

‘MEREDITH BREAKS PROTOCOL FOR EVERY PATIENT, WE CAN’T BREAK IT FOR HER?’ | As “My Happy Ending” began, freshly installed chief of chiefs Richard broadcast news to the staff that additional COVID-19 protocols were now in place. He also announced a new influx of interns. Nearby, Meredith complained about being kept in the hospital following her incident. “I have connections,” she reminded Teddy. “I own the place.” After Maggie lost her seventh patient in a week, Cormac expressed his empathy; he didn’t want her to say hello to Mer for him, though. “I wouldn’t want her to think she was special.” (Ha.) Just as Grey’s peers were about to relent, knowing she’d just discharge herself, they discovered her on her hospital-room floor. In her dream, as foretold by last week’s episode, she saw McDreamy, and for at least a moment, life was a beach.

After what seemed like 20 minutes of commercials — seriously, wow — Mer regained consciousness. “I can hear you,” she reassured Maggie, “and you’re loud.” Despite Grey’s protestations, she was headed to radiology for tests. There, DeLuca became so wound up, ya had to worry that he was headed for another manic episode. While Jo reported to a very surprised patient that she was expecting, Link, Taryn and Jackson tended to a sex therapist who’d injured his hand. At the same time, Koracick informed the interns that they’d just won the lottery — per Richard, he was now in charge of them. Told that among them were a mother and daughter with the same surname, Ortiz, he cracked, “Two interns with the same name won’t fly. Who’s changing theirs?” Primo Tom. 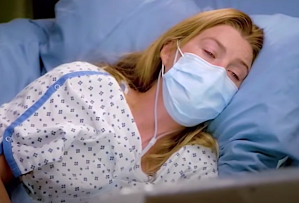 ‘I DON’T EVEN KNOW WHAT PANTS ARE’ | Concerned about Teddy’s state of mind, especially now that she was treating Mer for COVID, Maggie sought her assurance that she could handle what appeared to be coming: Patients in Grey’s condition could worsen in a heartbeat and be lost, and Pierce couldn’t be her doctor, she had to be her sister. Teddy was up to the task, she insisted. Nonetheless, Maggie also wanted DeLuca on the case; he’d seen more COVID cases than anyone, in the estimation of his ex. Looking at Mer’s healthcare directive, Maggie wondered if um, maybe she wanted to change that? After a Zoom call with Amelia and the kids, Grey must have drifted off, because we went back to the beach. “Derek,” she called out. “Why can’t I get anywhere?” She was worried about the kids, he told her, adding that the sand wasn’t real. “I miss you,” she told him. “I know,” he replied. How a dream version of McDreamy didn’t answer, “I miss you, too,” I’ll never understand.

When Bailey visited, Mer cracked, “If you think I look bad, you should see my lungs.” Miranda beseeched her friend to reconsider leaving her power of attorney with Alex, what with him being halfway across the country and all. But neither Amelia nor Maggie could do what might need to be done, Mer argued. And at least Alex could pull the plug if it needed pulling. When Cormac called from outside her hospital room, he encouraged her to choose someone who’d choose her over and over again to be her POA. (Was he volunteering?) She then shared her fear of falling asleep — what if she didn’t wake back up? — prompting him to assure her, “This virus has nothing on you.” 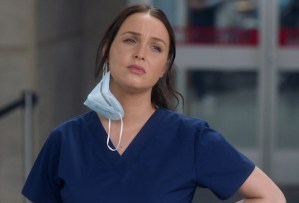 ‘MY ROCK BOTTOM IS THE FATHER OF MY BABY’ | As the episode progressed, Jo’s patient revealed that she and her husband had tried to get pregnant for ages, then she’d lost her job and had a one-night stand with a dork. Only she wasn’t actually expecting at all, she was full of tumors, it turned out during an examination by Carina. Then it turned out that the poor woman was pregnant after all, the fetus was just attached to her liver. Jeez, this plot was dizzymaking! “Do you want this baby?” asked Jo. The woman did. So they were going to have to deliver little Luna that day in order to ensure a safe arrival in the world. Miraculously, both mother and daughter pulled through.

While operating on the sex therapist with Jackson and Taryn, Link volunteered to stick around as long as necessary. “I fear the night at Meredith’s house like a medieval villager,” he admitted. After surgery, Jackson, Link and Taryn all wanted to know the sex therapist’s secret. “I ask my patients what they want,” he explained. Off that revelation, Link alleviated Amelia’s anxiety at home by doing exactly that and, as a result, treating her to some socially-distant nookie that was just what the doctor ordered. (Sorry. Couldn’t resist.) 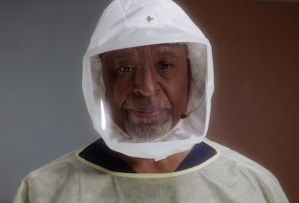 ‘SHE DESERVED NOT TO BE A STATISTIC’ | The older of the mother/daughter interns — nicknamed Mama Ortiz — stood up to Koracick in a way that made me think he might have found a new love interest. Or at least sparring partner. But Tom wasn’t feeling his new position at all and told Richard that he couldn’t do what Webber did. These kids didn’t need Koracick, they needed Richard. As the episode drew to a close, Teddy asked if she could have a cup of coffee with Tom. No, he said. Hell no. She’d broken him, and he needed to get over her. (Seriously, Teddy?!?) Just then, in came Owen to tell Tom that he’d tested positive for COVID. Oh, and Teddy, maybe you should put your mask back on. In a supply closet, Maggie broke down on a call with Winston. And in the hour’s final moments, Meredith gave Richard her POA. Afterward, Bailey told him, “They’re ready for you” — and he met with the interns. “We’ll be OK,” he promised them. “We’ll get through this together.”

But… would Mer? As she moved toward Derek on the beach, she urged him to walk toward her, too. But it wouldn’t help, he said, because the sand wasn’t real. Very Twin Peaks. As she ran toward him, she face-planted in the sand, which he’d sworn wasn’t real. So she hated him, she insisted. She loved him, he knew. And “I’ll be right here when you’re ready.” So, what did you think of MerDer’s reunion? Who do you think returns next week? We can’t possibly be getting Cristina, can we? Hit the comments.