Twelve years ago, Supernatural introduced an angel into the Winchesters’ world when Misha Collins made his debut as Castiel in the Season 4 premiere — and literal sparks exploded onscreen as viewers exclaimed, “OMG!”

Cas’ first scene — one of TVLine’s Most Memorable Character Entrances — was striking on multiple levels: The reveal that angels existed and God had sent Castiel to resurrect Dean because he had work for the hunter was hugely significant for the mythology. The moment is also iconic for its distinctive dialogue (“I’m the one who gripped you tight and raised you from perdition”) and the indelible visual of Cas slowly walking into the shed in a trenchcoat, with bullets bouncing off him and sparks emitting from the lights above.

Looking back on his intro, Collins remembers just how fiery the situation got with the practical effects on set. “We had squibs on my chest, and they were exploding, and I was supposed to not be fazed at all,” Collins told TVLine ahead of the show’s final season. “It’s like a gunshot. It’s very jarring. So I was trying to not respond to gunshots going off on my body, and it was really hard.”

On top of that challenge, “we had these sparks coming down from the lights,” Collins continued. “So they misted my hair so it wouldn’t catch fire, but I remember the hot sparks landing on my scalp and hearing the sizzling sound, and it hurting and trying not to react to that as well. And then [director] Kim [Manners] gave me a direction: ‘Let’s go again and try not to be so squeaky.'” 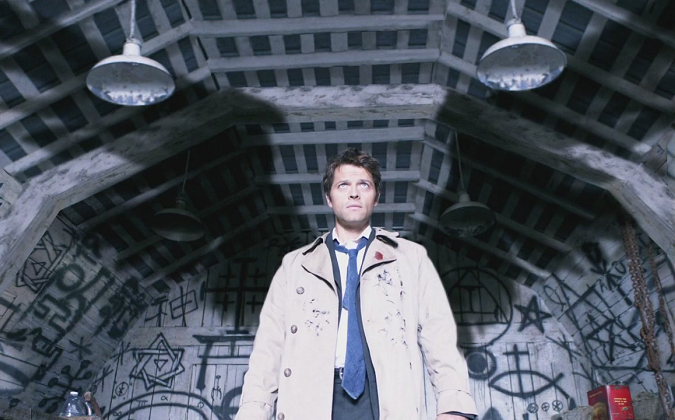 But the pain was worth it, because when Collins first saw Castiel brandish his angel wings in all their glory on TV, “I was like, ‘Oh, that’s kind of badass,'” the actor said. “It was a great character introduction, and at the time, I don’t think I really processed that it was a cool character introduction.”

As a new addition to the series, which at that point had a certain style of characters, “I think I was maybe, tonally, doing something different from what was customary on the show,” Collins added with a laugh. “But because my character was a new type of being, an angel, somehow it worked. So it was, like, just lucky.”

Before booking the career-changing role, “I’d never done a show like Supernatural,” Collins noted. “I really hadn’t watched the show, so I didn’t even know what the tone was, and I didn’t know what really was happening. I just sort of saw it as another guest spot that wasn’t a big deal, and I was kind of not putting a lot of stock in it, I guess.”

But once Collins arrived in Vancouver, he immediately recognized that he was in for a special experience. Before he even started filming his debut episode, the tone was set for what would become a long and unforgettable journey.

“One thing that just took me back a little bit about coming up to set for the first time was how warm and welcoming the production and crew was,” Collins recalled. “Supernatural did this thing, which is they had a welcome binder for guest stars, and it was a three-ring binder with menus and restaurants and a map of Stanley Park and suggestions of things to do and see while you’re in town, and it was just this strangely welcoming thing that they did. And then Kim Manners had me come to set and just meet him while he was shooting another scene that I wasn’t a part of. It felt welcoming in a way that I had not experienced on TV before.”

The Supernatural series finale airs this Thursday, Nov. 19 at 9/8c on The CW, following a retrospective special at 8 pm. Check out all of TVLine’s Supernatural Finale Week content here.