HBO Max’s Fresh Prince of Bel-Air reunion couldn’t have come along at a better time — and we aren’t just talking about the special’s one-day early release.

At a moment when our country feels more divided than ever, there’s something truly uplifting about watching Will Smith and Janet Hubert — feuding co-stars who famously hadn’t spoken in 27 years — sitting down to speak their truth, sort out their differences and heal from their shared experiences. (And this 75-minute special is nothing if not healing.)

Smith’s long-awaited talk with the original Aunt Viv comes midway through the reunion, which is now available to stream. Seated in a stunning recreation of the show’s iconic living room, surrounded by six of his former costars, Smith drops this uncomfortable segue: “As a family, we have our things we talk about… and we have our things that we don’t talk about.”

The others, especially poor Tatyana Ali, appear visibly concerned, while the viewers knows exactly where he’s going with this. “We never really, together, publicly talk about Janet — and what happened,” he says. “I couldn’t celebrate 30 years of Fresh Prince without finding a way to celebrate Janet.”

For those in need of a refresher, Smith is referring to Janet Hubert, the actress who portrayed Vivian Banks for The Fresh Prince‘s first three seasons (1990–1993). Ultimately replaced by Daphne Maxwell Reid for the show’s final three seasons (1993–1996), Hubert chronicled her difficult departure — much of which she blamed on Smith, who was a producer at the time — in her 2009 memoir Perfection Is Not a Sitcom Mom. 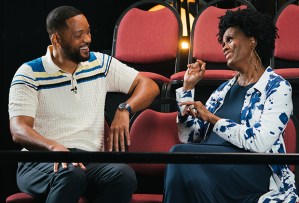 What follows is an absolute gut-punch of a pre-taped segment, in which Smith and Hubert finally sit down for a one-on-one discussion about their lingering issues.

“I just wanted to know one thing: Why?” Hubert asks Smith, already beginning to tear up. “Why so far? You guys went so far. I lost so much. How do we heal?”

It soon becomes abundantly clear that Smith didn’t know what was happening in Hubert’s private life at the time. So she explains, via a taped confessional: “During that third season, when I got pregnant, there were a lot of things going on in my life, and in Will’s life as well,” Hubert tells the camera. “There was some friction because I was pregnant [and] my home life was not good at all. I was no longer laughing, smiling and joking because there were things going on that nobody knew about. The cast had no idea what was going on.”

“During her pregnancy, I wasn’t sensitive,” Smith acknowledges in his own interview. “I wasn’t perceptive. Now that I’ve had three kids, I learned some things that I did not know at the time, and I would do things very differently. I can see where I made the set very difficult for Janet.”

Then Hubert gets into the business of it all: “They offered me this really bad deal in the third season. They said, ‘You’ve got two months and two weeks of work, and you cannot work anywhere else.’ That meant my salary was cut. I had a new baby and a husband who was out of work, so I said no. I did not accept their offer. I was never ‘fired.’ That misconception was always put out there. I was trapped. What else could I do? So they said, ‘Fine, we’re going to recast your role.’ And I said, ‘Fine. What can I say?’ I was hurt deeply. Deeply.”

After hearing her side of the story, Smith tells her, “I was 21 years old. Everything was a threat to me.” When Hubert asks why he saw her as a threat, he clarifies, “Not you — the world. I was so driven by fear.”

“But you didn’t realize I was going through a lot at home,” Hubert says. “You didn’t know. A very abusive marriage.”

To this, Smith says, “I’ve had children, I’ve been divorced, I’m in my second marriage. I can see now the level of pain and struggle it was for you just to show up everyday.”

Then Hubert makes sure Smith knows exactly what he cost her. “Words can kill,” she said. “I lost everything. Reputation, everything. You were able to move forward, but you know … calling a Black woman ‘difficult’ in Hollywood is the kiss of death. It’s hard enough being a dark-skinned Black woman in this business.”

“Thank you for sharing that with me,” Smith tells her in the end. “When I look back now, it’s obvious that you were having a hard time. I felt like you hated me. I could not do a 30-year celebration of this show and not celebrate you — celebrate your contribution to this show, to my life. … You’re still my Aunt Viv.”

“We’ve said such hateful things about each other, and I’m sorry,” she says. (She also says, “I’m sorry that I’ve blasted you to pieces,” which is a far more entertaining apology.) 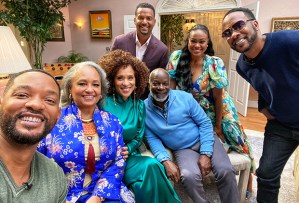 But that’s not the end! Smith invites Hubert to come to the next-day taping with the rest of the cast, so she can reunite with her former on-screen family — and meet her replacement for the very first time.

“Seeing Daphne and Janet — my two moms, the two Aunt Vivs — meet for the first time and embrace was the most incredible thing,” Karyn Parsons says in a confessional.

Adds DJ Jazzy Jeff, “That was chilling. That was a dream come true. That was a full-circle moment.”

And Ali sums up everyone’s reaction by simply saying, “It made my heart really full.”

You tell us: Did the long-awaited Smith-Hubert reunion play out as you expected? And how hard did you sub during the cast’s tribute to the late James Avery (aka Uncle Phil)? Grade the entire Fresh Prince reunion special below, then drop a comment with your thoughts.