I beg of you, future Amazing Race contestants: Please learn how to drive standard. How many racers throughout the years have had their games destroyed by a little ol’ stick-shift? Too many to count.

On Wednesday’s two (!) Race episodes, Will and James have another showdown with a manual car, while the season’s majority alliance starts to crack. (Plus, Hung has a total freak-out while rappelling down a 180-foot building!) What other adventures await in Berlin and Kazakhstan, and who was eliminated? Read on to find out!

AND THEY’RE OFF | The teams travel to Berlin by train, and Will and James and Kaylynn and Haley are praying they don’t have to drive in Germany. Tough luck: After hustling to the Berlin Wall’s East Side Gallery, a clue directs them to drive a Trabant (an old-school German car) to Teledisko, the world’s smallest disco party. As if a regular stick-shift weren’t hard enough, the car’s clutch is on the steering column, providing yet another challenge for them to navigate.

Gary and DeAngelo arrive first to the Teledisko, where they must dance in their own private disco room until the music stops. While the former pros party on, Will and James struggle to get their car moving (taking the emergency brake off first helps!), and quickly learn their clutch is broken. Facepalm.

ROADBLOCK | After choosing not to Yield anyone, the footballers must rappel face-first down the side of a 180-foot hotel. As they descend, they have to unscramble a group of letters to solve a word puzzle. DeAngelo is the first to make it to the bottom, but exclaims, “I didn’t see any letters. Like, all I saw was my life flash before my eyes!” Hey, we can’t blame him! Back up he goes, making a deal with Hung to work on the word puzzle together. She promises she’ll wait for him at the bottom.

Hung absolutely loses a gasket falling down the building’s face, but manages to correctly answer the word puzzle: “sauerkraut.” She gives DeAngelo the answer, and they wait around to help the volleyballers, too. When it comes time to hail some taxis, Gary and DeAngelo swipe the first cab they see, leaving Hung and Chee behind to reconsider their generosity. 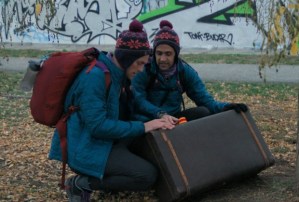 DETOUR | Teams must now choose between performing a classic German song or instructing a round of beer yoga, which is apparently a thing that exists. Team NFL gets to the yoga studio first, where they learn four different poses that they will then need to teach a class. Chee and Hung, plus the volleyballers, also choose the beer detour (why would you not?), and arrive just in time for Gary and DeAngelo’s botched first attempt.

Will and James select Option Number 2, and start learning German lyrics, while Gary and De complete their task and race on. Kaylynn and Haley have fallen in dead last. It’s not looking good for “the blondies,” and Haley’s in tears as she heads up for a fourth plunge.

PIT STOP | Gary and DeAngelo are the first team to check in, winning the leg and $7,500 each! Riley and Maddison take second, while Hung and Chee land in third. And of course Phil clues them in on the $15k they lost.

WHO WAS ELIMINATED? | Kaylynn and Haley place last, and while the two sisters gave it their all… wait. What’s that? Another non-elimination leg? The sisters escape elimination for the third time in a row, and luckily for us, we’re racing directly into the night’s second helping!

AND THEY’RE OFF | The teams depart Berlin for Almaty, Kazakhstan, where they race to Kazakhfilm Studio. Will and James wonder why no one has used their Yield yet. Thus far, they’re the only team with blood on their hands, and they want to see their alliance of five start throwing daggers. Will more lines in the sand be drawn soon? 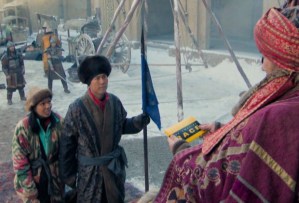 DETOUR | Teams must pick between answering questions about a live-action sequence or learning their own choreographed film scene. Before the Blonde Bandits can decide, they must glue fake facial hair on each other for their Speed Bump, and run the entire leg boasting their new lewks.

While Hung and Chee, and Leo and Alana fail their quizzes, Riley and Maddison become movie stars and receive the next clue. Next stop: Nomad Village, where another Yield opportunity lies.

‘ITS NOT THE AMAZING BEST FRIEND RACE’ | Hung and Chee arrive first to the remote village where they must decorate a yurt by copying an example. When the sisters arrive (in sixth place), James and a volleyballer convince them to Yield Leo and Alana. The women don’t want to at first, but pull the trigger after being egged on. A sneaky play by James, but a great behind-the-scenes ploy that will definitely benefit his alliance.

The volleyballers miss a key component — a cooked lamb’s head — allowing Will and James to steal first. While Hung gives the footballers another answer (and immediately regrets it), Will and James race to the pit stop: First President Park.

PIT STOP | Will and James secure first place and a trip for two to Las Vegas! They also receive a bit of news: The next round is a Mega-Leg: double the detours and roadblocks, and double the distance! It’s going to be the “toughest leg so far,” Phil warns. They’d better rest up.

WHO WAS ELIMINATED? | Leo and Alana are the last to arrive, and thus, are eliminated from the race, while the Blonde Bandits live to fight another day.

Are the sisters one of the luckiest Race duos ever? Let us know your thoughts — plus, pour one out for Leo and Alana — in the Comments below!