CBS’ NCIS opened Season 18 with a shocking bang (or two), before hitting “rewind” to take us back to one year ago — and stay there. Are you enjoying the time warp?

Following a cold open in which McGee cut off a private jet as it taxied, only to get shot not once (in the arm) but twice (in the leg) by hidden sniper Gibbs (!!), the opening credits led into a series of flashbacks. There was the Season 16 finale, in which an anxious Fornell pulled a gun on a doctor as OD’d daughter Emily hung on by a thread; an October 2019 scene where Gibbs shrugged off McGee’s lead on the supplier of the opioids that nearly killed Emily, saying Fornell was “moving on”; and then the November 2019 episode “Musical Chairs,” where Gibbs abruptly left to go fishing for sturgeon (but really to help Fornell after Emily exited rehab) and later resurfaced with a mysterious shiner.

The rest of the episode (and the next few to follow) picked up from there, in November 2019, as Gibbs met up with Fornell, who said that while this opioid nightmare is behind Emily, it is not over for them. Rather, Fornell has a lead on a red-headed “errand boy” named Josh, who may lead them to the “head of the snake” that traffics the dangerous, counterfeit opioids.

The gents stake out a strip mall medical clinic, and while Fornell is tempted to chase after a “small fish” they see arrive to deliver drugs, Gibbs reminds him to stick to the grander plan and wait for errand boy Josh, and then follow him. Fornell though gets antsy and ducks inside the shady clinic, where seeing a girl Emily’s age sets him off. Gibbs arrives to claim his addled “Uncle Ed,” and gets socked in the eye by a stubborn Fornell during the extraction. 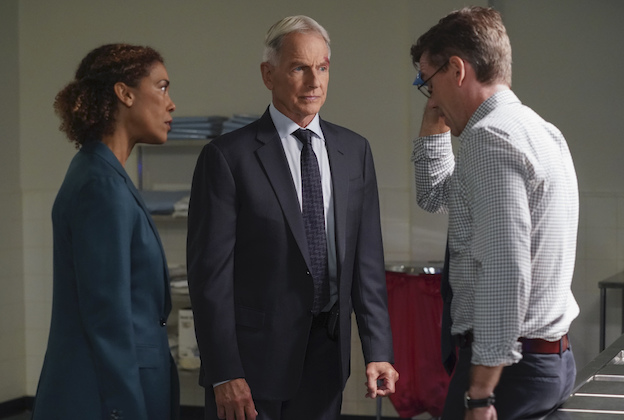 We then dovetail with the end of “Musical Chairs,” as Gibbs arrives at the Navy band’s concert with his bruised brow. Outside afterward, the topic shifts to Jimmy Palmer and the misplaced corpse of a Marine corporal Richard Darby. After briefing Gibbs, Jimmy sets out to return to the office and meet up with his night shift counterpart Ronnie Tyler when chirping his station wagon lock sets off a bomb! As Jimmy recovers from getting bowled over by the blast, Gibbs announces he is assigning a protective detail to both him and Tyler (who among other things is some sort of family friend of Vance’s).

While Torres and Bishop scope out Darby’s “doomsday prepper” RV and talk to a pair of nosy neighbors, McGee reports that Agent Tyler sent home her protective detail. Upon being caught about to go rogue, Tyler explains to Gibbs & Co. that a masked man broke into her home and held her daughter Jasmine at gunpoint, taking the kid away until Tyler delivered Darby’s right hand to a 3 o’clock drop at the park. The NCIS team arrange for Tyler to drop off an impostor hand, but when the kidnapper (posing as a nearby hobo) gets spooked, a foot chase ensues… and Torres accidentally steers the suspect into a speeding truck’s front fender.

Hitting that very dead end, the team discovers that the disguised kidnapper was one of Darby’s nosy neighbors, who had gotten wind of the doomsday prepper’s $160,000 life savings withdrawal. As such, the neighbor killed Darby and aimed to use his hand to open a safe inside the RV. And beneath the RV, below a trap door, they find Tyler’s gagged-and-bound daughter.

In the aftermath, Gibbs turns down a drink with Jack, then checks in on Fornell — who has found errand boy Josh, slumped over dead in a car. HAving already called the cops, Fornell pinches a key from Josh’s pocket and tells Gibbs to “check back with me in two weeks,” insisting: “Everything will make sense. Trust me.”

What did you think of NCIS‘ timey-jumping season opener?