Head-scratching choices are par for the course on The Voice. But usually, it’s the coaches’ moves that we call into question, right? Not Monday, though. The thing that made us — or at least me — go “hmm” was the show’s decision not to round out the Battles with the epic, epic one that went down between Team Kelly Clarkson’s Marisa Corvo and Ryan Gallagher. That was some Eurovision Song Contest-caliber firepower on display there! And if you read on, we’ll discuss not only what made it so remarkable but all of the evening’s performances.

Team Gwen: Carter Rubin (Grade: A) defeated Larriah Jackson (Grade: A+) on “Like I’m Gonna Lose You” — Larriah saved by Gwen | Sweet Jiminy Cricket, these kids were so crazy poised and polished in rehearsal, I figured I’d be typing this whole review with my fingers crossed for a Save or a Steal. Unreal how good they were! And on stage, they were even better. Larriah went from silky-soft tones to belting with the clarity of a bell being hit with a sledgehammer (which I mean as a major compliment). Somehow, Carter managed to match her excellence, projecting his soulful voice not just to the back of the auditorium but all the way into the parking lot. Awesome! Still, I’d have to give the win to Larriah; Carter went big, she went bigger, and in this instance, bigger was, however slightly, better. She’s gonna slay the four-way Knockout.

Team Blake: Ian Flanigan (Grade: B) defeated Aaron Scott (Grade: B-) on “Have You Ever Seen the Rain?” | From the get-go, I had a hunch that this Battle was Ian’s to lose; even Blake and Kane Brown commented on the uniqueness of his voice. Aaron has the greater range and ability to rattle the seats — he can be “Steven Tyler-like” in that regard, Kane suggested — but he just doesn’t seem… special. On stage, Ian was so casual, it was like he was chilling, singing in his pickup — and it worked. The technique fit him like a well-worn pair of jeans. Ian’s voice was, as we coulda guessed, more piercing and dynamic. But it felt more like a nice guy performing above-average karaoke than a potential sing-off winner showing his coach what he might be like as an artist. 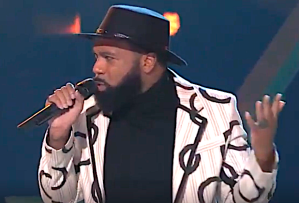 Team Legend: Casmé (Grade: B) defeated Rio Souma (Grade: B+) on “You’re All I Need to Get By” | Ahead of this Battle, I figured crowd-pleasing firecracker Casmé had the advantage; she’s a show-starter as much as a showstopper. (Also, I didn’t really recall Rio from the Blinds — never a good sign.) In rehearsal, the twosome sounded kinda off together at first, maybe a little flat? Individually, though, they sounded lovely. And even just practicing, Casmé brought out a full-on performance. She sings with her whole body! When it was go time, their intro still sounded iffy to me, but they got it together in a big way by the splashy first chorus. The key didn’t seem to suit Casmé, but she certainly gave it her all. And, as Gwen noted, her stage presence brought to mind a genie uncorked from her bottle. Nonetheless, I’d have given the edge to Rio, whose voice was so sweet, I wanted to spread it on toast (and for whom the key was just right). 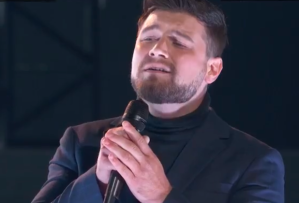 Team Kelly: Marisa Corvo (Grade: A+) defeated Ryan Gallagher (Grade: A) on “I Surrender” — Ryan saved by Kelly | In rehearsal, Kelly admitted that she’d never given a contestant a song as massive as Celine Dion’s hit. But Ryan was no doubt grateful for the distracting challenge: His mom, he reported, had contracted COVID while caring for his grandmother (who’d also had it). As he and Marisa got practice underway, she gave me chills at first — I can’t tell you how rare that is. When you’re tap-tap-tapping out a recap, it’s hard to be moved, and she got me. When at last the spotlight fell on the duo, Marisa started off singing with the delicacy of blown glass. Joining in, Ryan served gentle Phantom of the Opera vibes. This was actually less a Battle than a full-on War! Marisa’s voice cut through the wall of sound beautifully, and you could tell how pleased she was when she nailed a looong note that I figured had clinched her the win. She is formidable! That run she did in the second half of the song practically lasted the entire second half of the song. This was actually downright thrilling. Ryan has a gorgeous voice and acquitted himself beautifully — seriously beautifully — but da-amn! This was all. About. Marisa. I mean, look at this: Even just the blurb about this Battle is twice as long as the others. Hold on, I’m gonna go back and watch that again. (You can, too, below.)

Team Gwen: Ryan Berg (Grade: B+) defeated Liam St. John (Grade: A-) on “I Need a Dollar” | In rehearsal, it looked like Liam had this Battle in the bag. As always, he was Mr. Personality — he’s just a naturally electric performer, whereas his opponent is kinda… unplugged. He comes off more like a math teacher than a rock star. Even advisor Julia Michaels begged Ryan to at least bop a little while singing. On stage, he took Gwen and Julia’s notes to heart and actually got down. And sure, it was a bit awkward and forced, but ya gotta give him credit for climbing out on that unfamiliar limb (to the point that he got tangled in his mic pack). Unfortunately, even vocally, the Battle was no contest. Liam has greater range and more grit — he sounds like sexy, sexy sandpaper; Ryan, sandpaper that’s been sanded down a lot already. Of course, Gwen heard it totally differently than I did and dumped Liam! 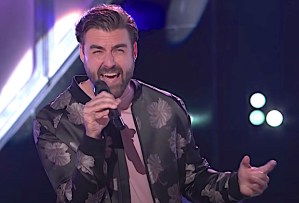 Team Legend: Cami Clune (Grade: B) defeated James Pyle (Grade: B+) on “Wicked Game” — James stolen by Blake | In rehearsal, Cami sounded terrific on the Chris Isaak classic — like smoke being blown through my ears. But James seemed to get more of a chance to power up; he just needed to connect more with the material, advisor Miguel suggested. (Perhaps that was a bit of his inexperience showing?) On stage… well, it wasn’t my favorite arrangement of the ballad ever; it seemed to set up both Cami and James to yell at each other a lot. But they were well-synchronized, at least. I’d have given the win to James, to my surprise. There was an authenticity to his vocal that was missing from Cami’s; four-chair-turn or not, she struck me as “affected.” And am I crazy, or wouldn’t it have been way smarter of the show to have saved the amazing Marisa/Ryan Battle for last? It didn’t have a Steal, but it did have a Save and was by far superior, no?

So, what did you think of the performances on the final night of Season 19’s Battles? Vote for the singer who most impressed you in the poll below, then hit the comments.