It is no spoiler at all that Aaron Wallace is released from prison in the Season 2 premiere of ABC’s For Life — the on-air promos as well as publicity photos loudly trumpet the fact. But how exactly the prisoner/lawyer pulls off said liberation remains to be seen, when the ABC series returns this Wednesday at 10/9c.

For Life is inspired by the real-life story of Isaac Wright, Jr., a Newark, N.J. man who was wrongly convicted on drug charges and sentenced to life in prison in 1991. While behind bars, Wright worked as a paralegal and helped to overturn the wrongful convictions of many fellow inmates, before finally proving his own innocence in 1996.

On TV, English actor Nicholas Pinnock (Counterpart) plays Wright’s on-screen avatar, Aaron Wallace, a club owner who was wrongfully convicted of drug trafficking. While serving his life sentence, Aaron earned a license to practice law and then helped  fellow inmates in court — and in the Season 1 finale, he earned himself a retrial, much to the consternation of arch nemesis Glen Maskins, a shady prosecutor on track to be the next Attorney General.

Helping Aaron in assorted ways over the course of Season 1 were Henry Roswell (played by Timothy Busfield), a former New York state senator who served as a legal mentor, and Safiya Masry (Indira Varma), the former warden where Aaron is locked up.

The Season 2 premiere picks up not long after the events of the May finale, where upon securing his retrial Aaron was proffered a deal by Maskins — one that would, yes, spare his wife Marie (Joy Bryant) possible punishment for violating HIPAA laws to track down a person of interest in Aaron’s case, but also leave Aaron unable to practice law as a free man. 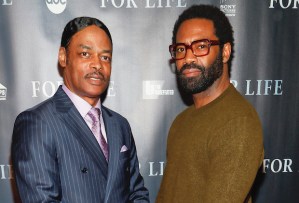 But no matter how Aaron ultimately orchestrates his release, he won’t be returning to society with the weight of the world suddenly off his shoulders.

“Absolutely not,” Pinnock tells TVLine. Rather, “There is the weight of everything that he went through last season, but with the added responsibility of who he is now as a husband and a father (to teen mom Jasmine, played Tyla Harris), which is something we explore a lot more … than we were able to in Season 1.”

After all, Aaron “was in prison for almost 10 years, and he was on the border of being institutionalized, so there are certain prison aspects of Aaron that are still with him now that he’s on the outside,” Pinnock noted. “He’s not not a free man going straight back into regular everyday social life. He’s having to adapt — and that adaptation puts on him a weight of its own.”

Explaining For Life‘s timetable, which ended its 13-episode freshman run with a cliffhanger about Aaron’s fate, series creator Hank Steinberg said at a recent press event, “We felt to really, fully earn the catharsis of his liberation from a dramatic standpoint — where you’re hoping to tell a five- or six- or seven-year story about an incredible character — that we should really make it feel earned. It felt organic to end the season with a  cliffhanger, and then move him into the next chapter at the beginning of the second season.”

Want scoop on For Life, or for any other show? Email InsideLine@tvline.com and your question may be answered via Matt’s Inside Line.