The Crown gets an infusion of new blood as Season 4 kicks off — and sheds a little blood, while it’s at it.

Sunday’s premiere opens with Elizabeth and her family in full military garb for a demonstration while we hear an Irish narrator railing against the English occupation and vowing to use violent force to get England out. Meanwhile, Margaret Thatcher (played by a nearly unrecognizable Gillian Anderson) has become the UK’s first female prime minister and leads a conservative takeover of Parliament. Philip scoffs at the idea of “two women running the shop,” but Elizabeth thinks that might be “precisely what this country needs.” At her first meeting with Thatcher, though, the new PM reveals she might agree with Philip: “Women in general tend not to be suited for higher office… they become too emotional.” (Yikes. File that one away for later.)

Charles, meanwhile, is getting older and still single, and Elizabeth is losing patience, needling Lord Mountbatten for the latest gossip on who her son is dating. He’s seeing a number of girls, including one named Sarah Spencer, but when he arrives to pick her up, he has a meet-cute with her little sister Diana (new cast addition Emma Corrin), who’s dressed as a wood nymph for a school production of A Midsummer Night’s Dream. She and Charles laugh and flirt together, and as she sneaks away, Charles’ eyes linger on her. 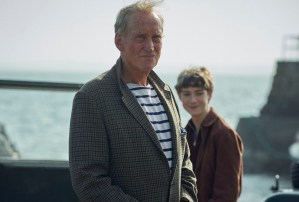 But he’s still seeing the married Camilla Parker Bowles, and Mountbatten does not approve, telling Charles so in a tense phone call that ends with Charles hanging up on him. Mountbatten sits down to write Charles a letter and then takes his grandsons out in a boat to catch lobster… and while they’re out on the water, the boat explodes in a ball of flame. Mountbatten is killed, and the IRA claims responsibility for the bombing. Charles is wracked with guilt, of course, even more so after he receives the letter from Mountbatten, which urges Charles to find a “sweet and innocent, well-tempered girl” and make a fresh start. 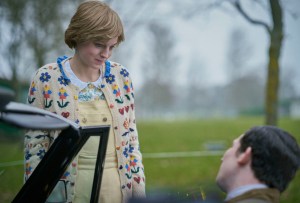 Ahead of Mountbatten’s funeral, Philip resents that Mountbatten chose Charles to speak, when he always considered Mountbatten a surrogate father (“You replaced me as son to him”), and there’s clearly still an emotional chasm between father and son here. Charles does speak at the funeral, though, and later, at Princess Anne’s show-jumping competition, Diana approaches him to offer her condolences. That sparks an idea in Charles: He calls Sarah Spencer, who’s now marrying someone else, and asks permission to date Diana. (She’s always behaved “as if she were destined for greater things,” Sarah tells him.) So he once again drives up to the Spencer residence… this time to take Diana out.

Give The Crown‘s premiere a grade in our poll, and then hit the comments to share your thoughts. (No spoilers for those who haven’t watched ahead, though.)