Prince Charles and Princess Diana’s wedding day looked like a fairy tale come true… but The Crown is about to reveal the harsh truth behind all that glamour.

Season 4 of the Netflix royal drama (premiering this Sunday, Nov. 15 on the streamer) covers Queen Elizabeth II’s reign from 1979 to 1990, which includes Charles’ whirlwind romance with Diana Spencer, played by new cast addition Emma Corrin. But while millions worldwide cheered for the couple at their 1981 wedding, The Crown doesn’t shy away from the serious challenges the couple faces from the very beginning, writer/executive producer Peter Morgan says. “It’s very hard to write the innocent start to a relationship when you know how tragically it ended and indeed how unhappy they were throughout it.” 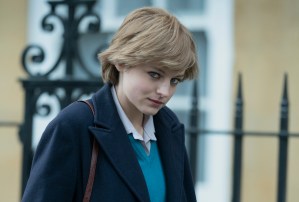 Diana fits in surprisingly well with Charles’ family right away, but she and Charles hit some major bumps in the road before they even walk down the aisle — Charles is still seeing his old flame Camilla Parker Bowles, for one thing — and Diana ends up feeling isolated and alone, with bouts of bulimia. The Charles we see in Season 4 is “a man desperately trying to get out of this mess,” star Josh O’Connor admits; he’s driven by duty to marry a woman he’s not entirely sure he wants, and both he and Diana pay the price for that. “These are two very lost souls… They both needed something they couldn’t give each other, and it didn’t work.”

But the world quickly embraces Diana — she was known as “the people’s princess,” after all — and the contrast between that public adulation and her private strife is at the heart of Diana’s journey in Season 4, Corrin believes. “She was always balancing the different sides of herself. She was able to radiate that brilliance and compassion that we all fell in love with, even when she was suffering.” Eventually, though, we do see Diana “growing up, becoming a woman, discovering who she is, her sense of self and her voice,” Corrin promises. 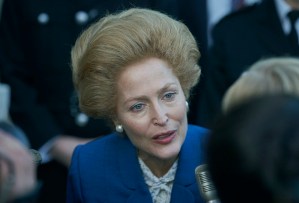 She’s not the only addition to Season 4, however. The X-Files star Gillian Anderson also joins the cast as controversial UK Prime Minister Margaret Thatcher, who oversaw a particularly tumultuous era in British history… and had a famously frosty relationship with Queen Elizabeth. “On the face of it, Elizabeth and Margaret should get on,” star Olivia Colman notes. “They are the same age, have the same drive, the same devotion to their fathers, the same work ethic. But yet they don’t. It’s not the beautiful friendship that the Queen hopes it’s going to be at the beginning.” (Anderson, though, was “incredible to work with,” Colman gushes. “Every now and then, I got a proper chill, she was so like the real thing.”)

Thatcher has the utmost respect for the Queen and the monarchy, but in terms of personality types, she and Elizabeth turn out to be polar opposites, Anderson hints: “Where the Queen leans back, Thatcher leans in. Where the Queen stays mum, Thatcher makes very clear her opinions. Where the Queen does nothing, Thatcher takes action.” And those actions lead to some serious showdowns between the pair… just one of the dueling duos on tap for The Crown‘s next chapter.

Tell us, The Crown fans: Are you more excited to see Princess Diana or Margaret Thatcher in Season 4?