The bad news for NCIS: New Orleans‘ Special Agent Dwayne Pride: Things will only get worse for his two agents investigating a murder at sea. The good news: A very special lady is about to re-enter his orbit, and she’s got some news to share. 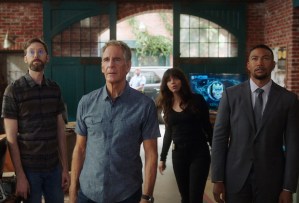 The CBS drama’s Nov. 8 opener sent Special Agents Gregorio and Carter (played by Vanessa Ferlito and Charles Michael Davis) to a humanitarian medical ship where a murder had been committed during the time it was not allowed to dock due to COVID infections. While Pride and Khoury chased leads on land, Loretta’s morgue dealt with some harsh realities about the pandemic. At episode’s end, an explosion aboard the medical ship impeded the murder investigation — and maybe did physical harm to the agents probing the case.

With Part 2 of the premiere arriving this Sunday at 9/8c, TVLine spoke with series lead Scott Bakula about resolving that explosive cliffhanger as well as the other Season 7 stories on tap, while his wife/newly promoted series regular Chelsea Field previewed New Orleans DA Rita Devereaux’s very happy return to Dwayne’s world.

TVLINE | That was quite a cliffhanger we left off with at the end of Part 1.
SCOTT BAKULA | Oh, good. Good. Yeah, it’s been interesting hearing people’s reaction to that opening because we kind of took a chance by kind of going back in time to the beginning of the pandemic, when the shutdown started, and telling how our characters were all affected by it. But people seem to have liked it.

TVLINE | CBS’ S.W.A.T. did a similar thing, and I actually think it’s almost easier, more accessible, to follow these characters at the beginning of the pandemic and remember how that was, how we were all getting acclimated.
SCOTT | I didn’t think there was any other way to do it, to be honest. I just feel like the character of the city plays such a big part in our show, and there was just no way to ignore it — and at the same time, when we started coming up with ideas for stories there was no way to really predict back in May what the world was going to look like whenever we got to go back and start making a TV show. I just started thinking about other things that the characters could do in a COVID shutdown, and I was talking to all of our friends here in the New Orleans law enforcement world about what they were doing and what their lives had turned into. 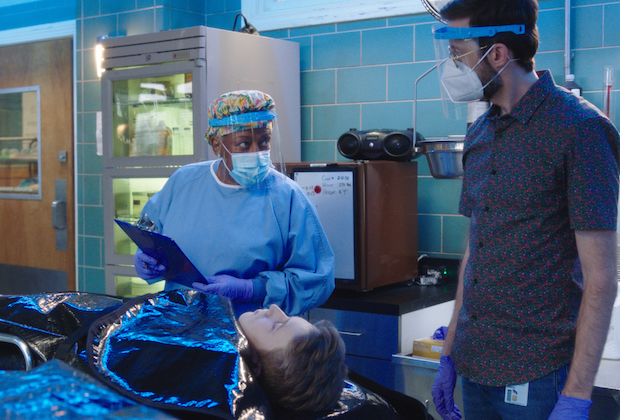 I was drawn to the fact that the city was hit hard, and you kept seeing these people on the front lines — like Loretta Wade, our coroner (played by CCH Pounder) — and how they were being just pounded. You know that there’s got to be all this PTSD and everything going on, and I felt like we want to bring that forward because that’s going to affect who they are five months from now, a year from now. It’d be like if we had six characters in a TV show and they’d all been to war but we never talk about war. So, it just felt right.

TVLINE | And I feel like we’ve barely brushed up against Loretta’s part of the storyline. Like, the match has just been lit.
SCOTT | Yes. It’s just starting, and there’s a lot to come with that for sure.

TVLINE | As far as Carter and Tammy being stranded out on the medical ship. Dwayne said he’ll ride a boat out there himself if he has to, to save them. Is it going to come to that?
SCOTT | [Laughs] I don’t think so. I don’t think so, but it’s a very interesting storyline, because obviously that was a relevant part of what was going on in the world at the very beginning of the shutdown — all the cruise ships being shut down and held out — so we found a way to put a crime on that ship and then get our folks there and lock them down. They go through some stuff, though; you’ll see in Part 2 that it gets pretty hairy out there. 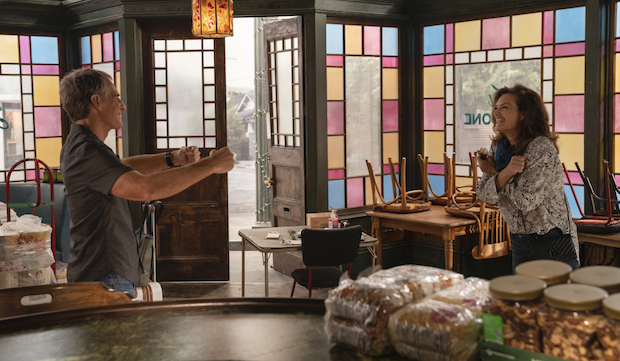 TVLINE | Chelsea, in the promos it looks like a very happy reunion for Rita and Dwayne.
CHELSEA FIELD | It is! And yet they’re not able to really express their joy physically until she gets a clean bill of health.

TVLINE | Oh, they’re going to play that? They can’t even run up and hug each other?
SCOTT |  It’s very funny. It really plays well.
CHELSEA | Everybody can relate to it because  you want to hug your loved one, but if you’ve been in different cities or different areas, you can’t until either you’ve quarantined, or you’ve gotten a negative test or whatever.

TVLINE | Is he expecting to see her or is it a pleasant surprise?
SCOTT | No, he has invited her down…
CHELSEA | That part is expected, but there’s a little surprise for him later on.

TVLINE | With Chelsea now a series regular, is there a way to pull Rita into the storylines a bit more, into the work that’s going on?
CHELSEA | There is, and the writers have done a really great job with that. I think the quarantine gave Rita time to think about her life and re-prioritize some things. She makes a couple of choices, and as a result of that she’s free to get involved in supporting people at more of a grassroots level. You’ll see as the episodes reveal themselves that it’s kind of a refreshing change for her. She has more of a parallel story now in terms of like being on the streets and helping people.

TVLINE | As long as she’s not a barback at the True Tone, that’s fine.
CHELSEA | [Laughs] Let’s put the band back together and sing at the club!
SCOTT | Yeah, she’s on Bourbon Street. Rita goes downhill fast, nobody saw it coming. You just never knew that’s how she was going to become this wild woman, but we lose her.

No. It’s good. It really works well, and it works great for us just personally because I’m out on a plane [to New Orleans] every weekend, as I have been for six years, and now she’s down here with me. And nobody wants to be on a lot of planes right now.

TVLINE | It also saves them having to introduce a possible new love interest for Dywane who you’d have to stay six feet away from.
CHELSEA | Exactly.
SCOTT | We can be romantic and we can be affectionate…. There aren’t a lot of couples that can do that on television these days. There’s something comforting in seeing people hugging again and people holding hands even. There’s a lot of that missing on the planet right now. 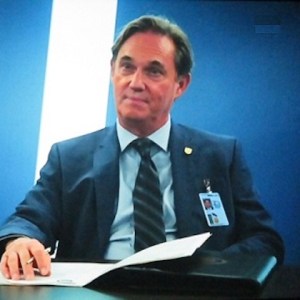 TVLINE | Scott, remind me: Are we 100-percent done with the Van Cleef (Richard Thomas) nastiness? Or could he be a bad penny that pops back up this season?
SCOTT | Well, in Episode 3 (airing Nov. 22) we get into present day, and there are some things that need to be cleaned up with his storyline — things that he caused, that he made happen years ago, and that affect Hannah’s character (played by Necar Zadegan). She delves back into that, but it’s as a result of how she stood up to him and the actions that she took as a woman and protecting other women in her line of work from people like him. She reaps some rewards from that and it opens up some doors for her to put some things back together again, in a positive way, that he had torn up.

TVLINE | Are there any other ongoing arcs this season?
SCOTT | We get involved in Carter’s family this year, learning more about why he is who he is. There’s Tammy and her mom dealing with her being gay. We’ve got my daughter’s wedding that was put on hold at the end [of Season 6], so we’re hoping to revisit that. And we have a couple of surprise guests that might show up out of prison and maybe cause some challenges.

To be honest, though, we’re more issue-oriented this year. We’re not ignoring the Black Lives Matter movement, we’re dealing with some ACLU issues that Rita’s character gets involved in…. It’s pretty topical this year. And while we’re still solving crimes.

Want scoop on NCIS: New Orleans, or for any other show? Email InsideLine@tvline.com and your question may be answered via Matt’s Inside Line.