One might say the power of fate is just as strong as the smell of skunk spray.

In the final moments of The Unicorn‘s inaugural season, Wade felt an instant connection with a woman (Justified‘s Natalie Zea) he met in a cemetery parking lot. But after helping her corral an injured skunk — and getting bathed in the animal’s pungent essence — the woman raced it to the vet before Wade could even get her name. One thing was certain: Wade was beyond smitten.

On Thursday’s premiere, Wade was determined to find the woman, despite giving off some creepy, stranger-danger vibes at a local elementary school. Was he able to track down whoever-she-was? Read on to find out.

Wade, Forrest and Ben head to a local vet to see if the mystery woman had gone there, but it’s a swing and a miss. Four vets later, the skunk lady is still nowhere to be found. While Michelle thinks it’s sweet (“It’s like a rom-com, Must Love Skunks“), Delia thinks it’s more like a stalker movie, which yanno, is pretty fair.

Over beers, Wade yearns for the woman’s big heart and piercing blue eyes. “It was electric. It may have only been two minutes, but I know everything I need to know about her.”

Ben quips, “Except for who she is and how to find her!” Point: Ben!

At lunch with Michelle and Delia, Wade sketches a sticker that was on his dream woman’s car. Michelle tells him that if it was meant to be, fate will make it happen. While Wade steps away to take a work call, the chef comes to their table to clear up a mishap with Delia’s order and… it’s the skunk woman! When Wade comes back, he quickly breezes by her and is none the wiser. Talk about a missed connection. 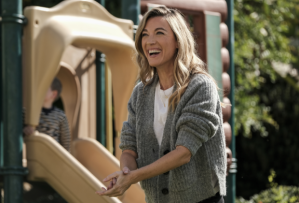 After the commercial break, we skip one month ahead, as Delia realizes a patient is wearing a shirt with Wade’s sought-after logo on it! It’s for Mt. Hope Elementary School. She tells Michelle and the others, and they decide to let sleeping dogs lie, positing that if the woman has kids, the likelihood of her being married is high anyway.

Forrest drops by to check in on Wade, who admits he may have gone off the deep end a bit. “No matter how bad you want something, if the universe has other plans for you, at some point you have to make peace with it,” he says. Forrest then cracks. “I know something… I can’t tell you.” But of course he tells him! Wade is psyched to hear the update aaaand he’s back on the case!

Wade visits the school and after creeping out a random mom, fate works its magic. The woman’s car pulls up to Wade’s amazement, but a man is driving it as the woman and her child get out. Wade decides to call it quits until the woman stops him, completely shocked to see her skunk-capturing partner in crime. When he sees that the freaked-out mom called security on him, Wade is forced to awkwardly cut the chat short.

During a happy hour on Wade’s patio, the doorbell rings. It’s the mystery woman once again! She Googled the name on Wade’s truck and thought the address might be his office. They finally exchange names. Shannon almost gets cold feet, but lingers long enough to say: “I’ve been thinking about you.” The man in her car? Her ex-husband, which Wade celebrates a little too much as she’s standing in front of him. He admits he was thinking about her, too, and that he was looking for her for weeks. Despite their odd circumstances, he asks if he can call her, to which she says yes. He bids her farewell, and goes to celebrate with his friends… only to realize he forgot to get her number! He quickly runs out the door to snag her digits.

Are you glad Wade and Shannon finally, officially, met? Grade the premiere via the poll below, then sound off in the Comments!