“Together apart” took on a whole new meaning in Monday’s episode of The Voice, which kicked off Season 19’s Battles with teammates competitively dueting with — but at a safe distance from — one another. Any way you sliced it, though, this was the round in which singers to whom we’ve gotten attached started getting cut. Who were the first contestants to get the chop? Read on…

Team Blake | Worth the Wait (Grade: B) defeated Taryn Papa (Grade: A-) on “Little White Church” — Taryn saved by Blake | In rehearsal with advisor Kane Brown, Blake advised WTW’s Mia to loosen up and warned Taryn that when she was making up her mind about a note, she’d gone flat. I kinda figured this was WTW’s to lose — how do you beat a three-part harmony, right? On stage, Taryn came out swingin’, spitting fire and oozing enough stage presence to make her opponents seem like they were her backup singers. When they got their turn in the spotlight, as predicted, their harmonies were divine, but only Mia’s vocal really stood out. (At least I think that was Mia?) All in all, it was a helluva Battle, but if I couldn’t have just put star-to-be Mia through by herself, I’d have given the win to Taryn (who, thanks to that Save, is now headed for a four-way Knockout).

Team Legend | Tamara Jade (Grade: A-) defeated Olivia Reyes (Grade: B-) on “Hard Place” | Practicing with advisor Miguel, Tamara, a four-chair turn and major Blinds standout, dazzled with the richness of her voice and her range. But per John, she had too much vibrato. Olivia, meanwhile, gave what Kelly would’ve called stankface for days and performed with a level of commitment that couldn’t be underestimated. I’d actually be bummed to see either of them go. When the spotlight fell on them, as John predicted, they “blew the roof off.” Olivia was solid, but her inexperience showed, whereas Tamara started strong and only got stronger. And when it came to sheer firepower, it was no contest — this Battle absolutely belonged to Tamara. 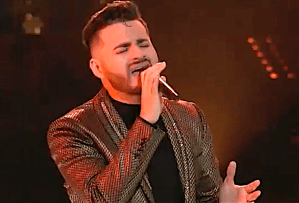 Team Kelly | Madeline Consoer (Grade: A-) defeated Eli Zamora (Grade: A) on “Nobody Wants to Be Lonely” | Pre-performance with advisor Leon Bridges, Kelly revealed that an infection had left her rocking a patch. “I feel like I could be a really great supervillain,” she said. Or Captain Hook wouldn’t be a bad name for a songwriter. But we digress… Madeline admitted that she was way out of her comfort zone, tackling the Christina Aguilera part of the duet. Eli, meanwhile, wowed his coach as “probably my most passionate singer.” On stage, Eli didn’t so much sing the song as live it. Madeline fought back, admirably, but I couldn’t take my ears (or eyes) off Eli. He was a vocal dynamo and is likely the season’s greatest showman. Afterwards, Blake marveled that despite how much Eli moved around, he nailed every note. I was gutted that he didn’t get stolen or saved; Kelly dropped the far more interesting performer here.

Team Gwen | Payge Turner (Grade: B) defeated Lauren Frihauf (Grade: B+) on “If the World Was Ending” — Lauren stolen by John | In rehearsal with Julia Michaels, the contestants admitted it was extra nerve-racking performing one of the singer/songwriter’s hits for her. Gwen warned Lauren against sounding “pinched,” and Julia pointed out that if she pulled away from the mic, some of the character of her voice got lost. Julia advised Payge to take care not to lose the breaks in her voice — they let her uniqueness shine through. When it was go time, Payge reminded me at first of a musical-theater singer — she enunciated the hell out of it. Though she went on to demonstrate great range and emotionality, I had a feeling — incorrect, it turned out — that the win was gonna go to younger, less experienced Lauren. She sounded prettier and more vulnerable. No wonder both Blake and John vied to steal Lauren. 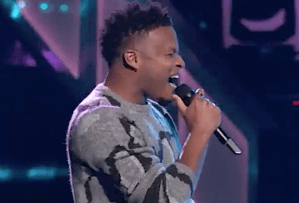 Team Blake | Jus Jon (Grade: A-) defeated Payton Lamar (Grade: B-) on “Dancing With a Stranger” | Before the one-chair turns entered the rehearsal room, Blake told his advisor that this would be his only pop-soul Battle. After hearing Payton and Jus Jon practice a bit, Blake told Payton not to start in her head voice, then go to her chest voice — let it fly. As for Jus Jon, he needed to not dress up the lines so much, per his coach. Sing those runs, don’t oversing them. In the moment of truth, Jus Jon came out sounding radio-ready: smooth and sexy and full of swagger. However, he looked nervous and stiff, at first at least. Payton was fine — she definitely has pipes. But her tone struck me as shrill. (Kelly thought it was pretty, though, so what do I know?)

Team Legend | Bailey Rae (Grade: B+) defeated Sid Kingsley (Grade: A) on “Tennessee Whiskey” — Sid stolen by Kelly | Even before I heard Sid and Bailey rehearse, I figured the Battle was his to lose — his Blind had been just. That. Good. (Lucky for Bailey, Blake had already promised to steal her.) Post-run-through, Miguel suggested Sid challenge himself to use his “blend” more to lift his vocal out of the mud. (Yeah, I didn’t know what that meant, either.) And John asked Bailey to sing a verse line an octave up to make it really kerpow. On stage, she did a great job deploying her twang and stretching out syllables like they were bubblegum. But Sid was just in another league. He sang with an amazing, altogether  casual growl and a slight sneer that made me think of Billy Idol. Awesome Battle. Good as Bailey was, I couldn’t believe John let Sid go!

So, who were you the sorriest to see go? (Eli for me… man!) And who did you think gave the night’s most impressive performance? Vote in the poll below, then hit the comments.