Faking college transcripts, pulling continuous all-nighters and slamming your system with uppers? Whatever it takes to make it in the unrelenting world of finance.

Welcome to HBO’s latest drama, Industry, where a group of young graduates enter a pressure cooker of a preeminent London investment bank with hopes of proving themselves indispensable. While Harper (played by Myha’la Herrold, Modern Love), an American, wrestles with a very-illegal decision that will surely affect her future, party-boy Robert (Harry Lawtey, The Letter for the King) and stress ball Hari (Nabhaan Rizwan, Informer) take very different approaches to their first few weeks on the job. Does each of them have what it takes to survive this high-stakes arena? By the end of the first hour, the answer to that is a resounding “no.”

We begin with a round of interviews, as Eric Tao, a managing director, asks up-and-comer Harper, an intelligent New Yorker, why she put her IQ on her resume: “I think mediocrity is too well hidden by parents who hire private tutors,” the grad replies. “I am here on my own.”

Among the other new hires is Yasmin, a privileged woman working in foreign exchange sales, and Robert, an eager over-achiever who’s relentlessly teased by d-bags in his department for leaving the label on his suit sleeve. The new hires are told that relationships with clients and senior members will all be calculated, and come RIF day (which stands for “reduction in force”), the graduates will have to explain why they should be permanently hired. “Half of you won’t be here in six months,” warns Eric, so the wannabe financiers must strive for perfection. No presh.

A small issue for Harper snowballs into a larger one: The company is clamoring to get a hold of her transcripts, and by the look on her face, something shady is going down. She claims her school is notoriously slow, but then texts someone named Todd, asking for a favor. The two connect, and we learn Harper is, indeed, looking for a fake transcript. (How did she get hired in the first place, then?)

The grads are surrounded by piranhas that seem more like hazers at a frat than business professionals. Harper has a run-in with her line manager Daria, and right before we expect her to chew Harper’s head off, she invites her out to a client dinner instead. 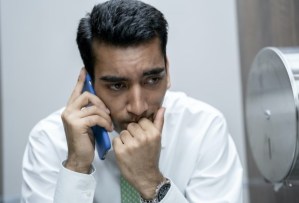 Meanwhile, Hari isn’t handling the stress well at all. He’s staying at his desk overnight, pounding Red Bulls and other stimulants, while napping in the bathroom to log more hours. He thinks it’ll help him in the long run, but clearly his methods aren’t sustainable. Hari’s boss knows he only left the building once in 48 hours because his key card is raising red flags. She’s peeved, and orders him to immediately exit the building.

At the client dinner, Harper swings big and pitches the client, and by the look on the woman’s face, she’s picking up what the grad is putting down. Later, when the two are left alone, Harper offers to write up the option in the morning. The client, Nicole, responds by feeling her up in the backseat of a car. When Harper doesn’t reciprocate the advances, things get awkward.

Back at her apartment, Harper finds a hammered Hari in the hallway, and invites him in to sober up. Hari confesses he feels less-than, and that Gus, another grad, makes him feel unworthy. They fall asleep, but when Harper wakes, Hari is already in an Uber, popping pills to stay awake on his way back to the office.

While Hari continues downward spiraling, Robert’s excessive partying becomes a hindrance. We see him dancing with an older woman and bumping lines of cocaine… which clearly won’t be helpful for his 7 am meeting. He doesn’t seem worried; instead, he gets some in the bathroom of a nightclub, snorts the rest of his blow, and heads straight into work come sunrise.

Hari also was up all night working on materials for a pitch, but when he realizes he used the wrong font on one page of a pamphlet, he freaks. Panicking, he calls the printer to try to order a reprint. Moments later, we see what looks like him losing consciousness in a bathroom stall.

Eric presses Harper to call Nicole and secure the business, but she’s still uncomfortable. A tizzy on the floor interrupts and everyone is corralled into a room. Hari is dead: The pills, booze and pressure have taken their toll.

Harper finally gets her fake transcript, and as she’s about to upload it to the company’s portal, she cancels the transfer. She finally gets on the phone with Nicole. There are some tense moments as the women talk shop, with Harper pricing out the option as they negotiate. The deal is soon agreed upon, and boom! She secures her first bit of business. “Do not forget how this feels right now,” Eric tells her, taking her hand. “You are a world-killer. Now I see you.”

Harper celebrates the victory by reserving a swanky suite overlooking London. As she chomps on a huge burger, she finally uploads her “transcript.” For real, this time. She’s ready.

So what did you think? Grade the episode below, then hit the Comments and chime in!