Monday’s episode of Dancing With the Stars served as the Season 29 quarterfinals, or, phrased differently, the third-to-last broadcast of the season.

It was also Icons Night, a fact the competition series would not let us forget as each contestant honored a different music legend. “Britney Spears is just iconic,” remarked Kaitlyn Bristowe. “George Michael is such an icon,” said Johnny Weir. If you’d been playing a drinking game with that word at home, your liver would have waved the white flag after about 20 minutes.

As for Monday’s performances, several duos made a strong case for advancing to next week’s semifinals, with at least one routine instantly entering the Dancing Hall of Fame. Others? Not so much! Let’s break down the evening’s performances:

Justina Machado and pro Sasha Farber (Rumba to Madonna’s “Crazy for You”): Contrary to what the judges said — that Justina was making her movements too small throughout this rumba — I actually felt she was overextending at times, particularly her port de bras in the beginning. Sasha seemed to steady her quickly enough, but Justina didn’t appear to surrender to the sensuality of this style as much as I’d hoped she would; she often looked extremely aware that she was performing a rumba, and it was a shame she didn’t get swept up in the mood of the dance. Judges’ Score: 24/30 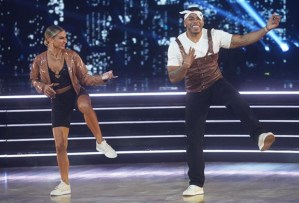 Nelly and pro Daniella Karagach (Jazz to 2Pac’s “California Love,” pictured): To be clear: Nelly’s dances have provided endless joy this season, and his growth as a performer has been marvelous to witness. But this? Was a Week 1 performance. Nelly’s got charm for days, and I appreciate that Daniella knows how to choreograph to his strengths; still, his footwork here was messy, he often seemed to forget what section was coming next, and as much as I love their swagger as a duo, Nelly and Daniella just didn’t bring enough jazz content to truly wow us. Plus, while I’m not usually one to overanalyze the judges’ scoring decisions, the fact that Nelly and Justina earned the same score, with very different performance levels, is perplexing. Judges’ Score: 24/30

AJ McLean and pro Cheryl Burke (Viennese Waltz to Queen’s “Somebody to Love”): AJ had a nice solo section at the top of this number… but when the partner work began, it all fell apart. I’m not sure if AJ forgot some of the steps, or if he was simply thrown off by that one connection he and Cheryl missed when he was standing too far away from her to grab her hand. Either way, this routine was shaky throughout — but that cover of “Somebody to Love” was even shakier. Come on, ABC! Spring for the real one sometimes! Judges’ Score: 21/30

Kaitlyn Bristowe and Artem Chigvintsev (Argentine Tango to Britney Spears’ “Toxic”): After plateauing for the last few weeks, Kaitlyn has very much needed a breakout performance — and hoo boy, this was it. It always helps to have a moody cover of Britney Spears’ “Toxic” on your side, but Kaitlyn’s dancing was just impeccable here. Her lines were clean, the shapes she created with her legs were gorgeous, and there was a certainty behind all of her movements that made the performance completely magnetic. To quote Ms. Spears herself: Gimme, gimme more. Judges’ Score: 30/30

Johnny Weir and pro Britt Stewart (Quickstep to Amy Winehouse’s “Valerie”): Johnny and Britt had the unenviable task of following Kaitlyn and Artem, but their performance didn’t seem to suffer. In fact, after chatting in his pre-performance package about the insane pressures of figure skating at the Olympics, Johnny seemed to realize that on DWTS, all that’s up for grabs is a goofy trophy; to that end, this quickstep had a lightness and joy that’s been missing from Johnny’s previous routines. He and Britt seemed to be having a ball out there, and their footwork was in sync at even the trickiest moments. Judges’ Score: 30/30 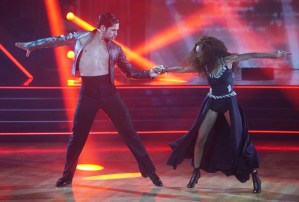 Skai Jackson and pro Alan Bersten (Paso Doble to Janet Jackson’s “If,” pictured): Oh, you want iconic? Skai Jackson will give you iconic with that perfectly timed floor spin. Frankly, Skai’s commitment to stopping that spin when she was completely vertical should have earned her a 30 right there, but I’m not the one with the paddles. Anyway, floor spin aside, this was still one of Skai’s strongest performances; there was occasionally too much strength in her movements, and I worried she and Alan might tip right over with all that power. But the intensity was impressive, and I’m glad to see Skai relying on Alan less and less. Judges’ Score: 27/30

Nev Schulman and pro Jenna Johnson (Jive to Elton John’s “Saturday Night’s Alright (For Fighting)”): Since Week 1, Nev has had an effortlessness in his execution that no other contestants (except perhaps Kaitlyn?) have really matched; he almost never needs Jenna’s help keeping the steps straight, and he can handle lotsa content in his routines. On Monday, that effortlessness worked against Nev a little bit; the jive content seemed like a piece of cake for him, but those kicks and flicks lacked power as a result. Judges’ Score: 27/30

After the regular performances, it was time for the once-per-season dance-off challenge, in which two couples face off against each other on the dance floor, performing in the same style at the same time. Nev and Jenna, who topped last week’s leaderboard and went into Monday’s episode with the highest cumulative score of the season, earned dance-off immunity and did not need to participate; the others, however, were left to compete for two crucial bonus points from the judges.

OK, your turn! Do you agree with AJ and Cheryl’s elimination? And who delivered your favorite (or least favorite) Icons Night performance? Tell us in a comment below!