There are presumably few things more thrilling to a NASA astronaut than a trip to the moon… but the men of Moonbase 8 don’t get to experience that rush just yet.

Showtime’s new comedy series, which debuted Sunday night, takes place not on the lunar surface, but in Winslow, Ariz., where three astronauts are stationed at a simulation moon base in hopes of one day traveling to the actual moon. As they eagerly (and perhaps futilely) await a real assignment in outer space, Skip (Fred Armisen), Cap (John C. Reilly) and Rook (Tim Heidecker) spend their days learning how to live and work on the moon, should they ever get there.

The trio is joined, quite randomly, by Kansas City Chiefs tight end Travis Kelce, who’s playing an exaggerated version of himself — and this version of Kelce is mean, particularly to Cap. So when the base unexpectedly runs out of water three weeks before the next water shipment will come in, Kelce bullies Cap into supporting his idea that they dig a well, even though Skip and Rook don’t think a well is environmentally tenable.

But Kelce and Cap embark on the project anyway, and when Kelce takes over the digging for a while, he strikes something hard in the ground… and a massive hole suddenly opens up, pulling Kelce down into it. The other men try to communicate with Kelce while he’s underground, but he flatlines after a few minutes, and the remaining trio is split on how to proceed. 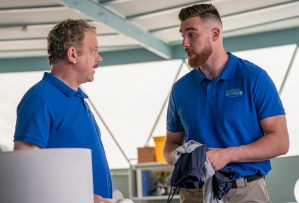 Skip and Rook think they should simply report the tragedy to NASA, since they all signed a waiver before coming to base that should absolve them of any fault in Kelce’s death. Cap, though, is convinced their dreams of traveling to space will go poof if they call it in; they even draft an initial report to NASA, lying that Kelce merely stormed off the base when he realized he had lingering gambling debts, but they opt not to send it. Instead, they’ll just keep quiet and wait three weeks for their water to arrive.

Of course, a few days go by, and the men are absolutely parched. They’ve gone through all their water rations, and all that’s left are a few bottles of champagne they were saving for a special occasion. Seeing no other way to hydrate — especially since the base’s urine recycling machine creates water that’s quite salty — they uncork one bottle of bubbly, swearing they’ll only take a few small sips.

But they’re unable to resist the temptation of a drinkable liquid, and before they know it, the men are all drunk on multiple champagne bottles… and when a droopy-eyed Cap starts to fall asleep, Skip and Rook agree they need to call in Kelce’s death, as the guilt is eating away at them. (They do convey their plan to Cap, who misunderstands at first, but he eventually comes around to the idea.)

At the end of the premiere, the authorities arrive to retrieve Kelce’s body (he looks surprisingly… good? Considering he’s been dead underground for days?), and a higher-up at NASA says Kelce appears to be the only one at fault for his death, much to the relief of Skip, Rook and Cap (who certainly aren’t about to argue otherwise).

Despite the trauma of the past several days, the men agree they want to stay on the base for the foreseeable future — and after the leak in their water tank is patched, they all bask in their new, glorious supply of H2O.

OK, your turn! What did you think of Moonbase 8‘s premiere? Cast your votes in our polls below, then drop a comment with your full reviews!