This week on The Mandalorian, what was supposed to be a simple (if slow) “taxi” ride wound up having Mando & Co. bugging out!

Speeder biking through the desert after last week’s adventure, Mando and his ride got clotheslined by a trap set by a trio of thieves. Mando slugged it out with two of the bandits, while the third held Baby Yoda at knifepoint. Mando warned the diminutive thief that if it so much as left a mark on the Child, there’d be no place in the galaxy for it to hide. He then struck a bargain, trading his jet pack for the Child — only to them remotely control the jet pack afterward, sending its new “owner” for one wild ride, while Baby Yoda seemed to snicker.

Lugging Baby Yoda and his cargo on foot to Mos Eisley, Mando found Peli Motto playing Sabacc with an ant-like alien in the cantina. He explains how his trip to Mos Pelgo came up short, Mandalorian-wise. Peli says that her card game opponent, “Dr. Mandible,” may have some intel, if Mando covers its call of 500. Mando begrudgingly does, only to see Peli end the alien’s alleged “hot streak” with a winning hand. Back at her repair bay (and over some thruster-roasted dragon meat), Peli relays that there is a Mandalorian covert “in this sector, one system trailing,” though it’s unclear if it is her pal’s people from Nevarro. Thing is, Peli’s contact, a Frog Lady, needs passage to said system, and the real skank in the scud pie is that Mando can’t use hyperdrive for the trip, or else Frog Lady’s capsule of unfertilized spawn — which represent the last of her species — will die. Not thrilled to provide taxi service (and a slow one at that), Mando agrees to deliver the Frog Lady and her eggs to her husband on the estuary moon of Trask, in the system of gas giant Kol Iben.

Aboard the Razor Crest, Mando realizes he can’t communicate with the Frog Lady, while Baby Yoda sneaks off to the cargo area to be transfixed by the capsule of eggs… and later is caught by Mando popping one into his hungry mouth! The two go to catch a nap, but are awoken by a pair of X-Wings signaling them. One of the Rebel pilots, Carson (played by Kim’s Convenience‘s Paul Sun-Hyung Lee), informs Mando that his ship is not transmitting a beacon; Mando feigns that his hardware isn’t up to date. After a private conversation with the other pilot (Mandalorian EP/sometime director Dave Filoni), Carson asks if Mando has been in the proximity of the prison ship Bothan-Five (as in last season’s “The Prisoner” episode). Mando makes a break for it, and the X-Wings give chase, eventually descending upon an ice planet. Through some nifty piloting, Mando sets the Razor Crest down on the frozen tundra and backs it up into a cave, eluding his chasers. Alas, just as he does so, the ground beneath cracks and falls away, leaving the Razor Crest to tumble down into a cavern, damaged. 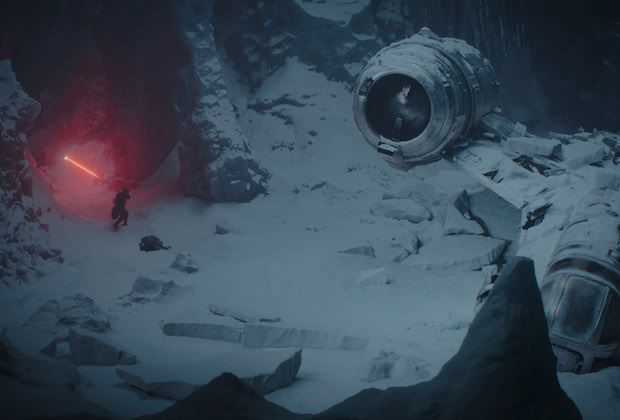 After helping Frog Lady back into her seat, Mando checks on the eggs… and finds Baby Yoda snacking again! Mando wants to wait for nightfall to survey their prospects (though I can’t imagine why?), and goes to catch more Zzzzs, but Frog Lady wakes him up by barking at him through the Zero android, whose voice box she has hacked into. She argues that her kind has fought too hard and suffered too much to risk extinction by the later fertilization of her eggs, and she demands that the Mandalorian be true to his word/their deal, per his “code.” Sufficiently guilted, Mando starts with the repairs, but later is alerted by Baby Yoda that Frog Lady has sneaked off, down to a warm pool to bathe herself and her eggs in. Mando says they need to get back to the ship, and as he helps her collect her floating eggs, Baby Yoda expresses curiosity in a nearby, very different kind of egg-like pod — peeling one open, and eating its contents. (Stocking up on Enfamil would save these guys so many problems!) Sure enough, the dozens of other nearby pods begin hatching, and spider-like babies skitter out of them. Worse, just as Mando gets wind of what Baby Yoda has set in motion, a gigantic Momma Spider shows up!

The spiders of assorted sizes chase Mando, the Child and Frog Lady throughout the caves, with Mando using his blaster and later(/finally!) his flamethrower to fend them off. As for Momma Spider, Mando lobs a handful of explosives to collapse the cave on top of it. Upon boarding the Razor Crest, the small and medium spiders follow, and Mando flames enough of them away to secure him and the others in the cockpit. Alas, when they go to blast off, a(nother?) adult spider crashes down atop the Razor Crest. But then Mando hears laser blasts, and sees the outside spiders getting picked off one by one. The Rebel pilots who had chased him earlier have saved the day! When Mando steps outside after the spider menace has been eliminated, Carson notes that there is indeed an arrest warrant out for Mando, for his abduction of a prisoner (the Twi’lek Qin). But they also learned that the Mandalorian apprehended three “priority culprits,” and well as risked his life to protect a member of the new Republic correctional corps. So… bygones! (As long as Mando gets his transponder working.)

After the X-Wings fly off, the mostly repaired Razor Crest does same, with everyone huddled together in the pressurized cockpit… and Baby Yoda seen sneaking just one more egg….

What did you think of the episode “The Passenger”? Though fun, did it feel a bit slight in the scheme of things, not really moving story forward?