B Positive, the latest entry in CBS’ Chuck Lorre-verse, presents a tale as old as time: Boy reunites with girl. Boy needs kidney. Girl offers boy her kidney. Will you stick around to see if these two crazy kids make it to the operating room?

In a moment, we’ll turn to series creator Marco Pennette (Mom) to address some of our lingering questions about the pilot. But first, a recap:

Thursday’s premiere introduces Drew (played by Silicon Valley‘s Thomas Middleditch), a therapist and newly divorced dad who is faced with finding a kidney donor. His doctor recommends that he reach out to his extended family for a potential match, but Drew doesn’t want a “Republican kidney.”

The following weekend, Drew attends a wedding and runs into former high school classmate Gina (Masters of Sex‘s Annaleigh Ashford), a wild child who manages to stay sober just long enough to hold down a job driving senior citizens to and from their doctor’s appointments. Drew attempts to keep their conversation brief, but Gina rambles on until she senses that something’s wrong. That’s when Drew reveals to this almost-stranger that he’s in renal failure… and this almost-stranger offers to give Drew one her kidneys. 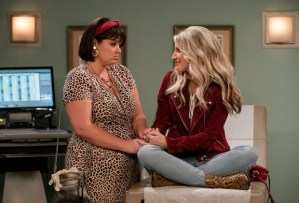 Drew is reluctant to take Gina up on her offer for all the right reasons — when he tracks her down, he has to remind her that she volunteered to be his donor; she was too drunk to recall — but he has nowhere else to turn. He also isn’t aware that Gina has thought this life-changing decision through in her own way. Gina’s BFF Gabby (You’re the Worst‘s Kether Donahue) accompanies her to a doctor’s appointment, where she’s about to find out if she’s a compatible donor. It’s there that Gina recalls a previous near-death experience, when doctors didn’t expect she’d pull through. Ever since then, Gina’s had a feeling that she was saved for a reason — to do something more important with her life. And now she can.

A blood test confirms that Gina’s a perfect match, but the good news come with a pretty big caveat: she’ll have to stay sober for three months in order to safely donate her kidney to Drew. She assures him that she’s got this under control — she’s managed to give up drugs and booze “a hundred times” before — but detoxing is easier said than done. Case in point: The following morning, Drew pays Gina a visit, only to find that she’s already fallen off the wagon and into bed with a coke-addled stranger. Drew berates her for being selfish, effectively ending their arrangement, then heads home to phone the kidney registry. He’s put on hold not once, but twice (and forced to listen to the Bee Gees’ “Stayin’ Alive” while he waits), then realizes what he must do.

In the closing scene, Drew chases down Gina’s transport van. When she refuses to open up, he hops on the windshield and begs her to hear him out. After he endures his fair share of windshield wiper fluid, Gina lets him in to apologize and agrees to move forward with the transplant. 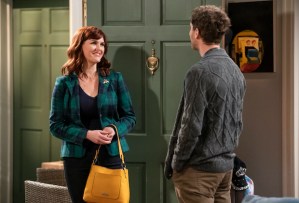 When the episode ends, Drew has yet to inform ex-wife Julia (Lorre-verse vet Sara Rue) or teenage daughter Maddie (AJ and the Queen‘s Izzy G.) that he has agreed to accept one of Gina’s kidneys, let alone that he’s in renal failure. Below, Pennette — whose own transplant journey inspired B Positive — addresses those missing conversations and previews what’s ahead for Season 1.

TVLINE | How is the rest of the season shaped? Does Season 1 focus on Drew and Gina’s evolving relationship between now and the time of the kidney transplant? Or does the procedure take place sooner than expected?
The first season will follow Drew and Gina as they prepare for their transplant surgery. Gina has a lot of work to do on herself both physically and mentally before she’ll be able to donate and that will take much of the [focus this year].

TVLINE | The pilot is largely focused on establishing the premise. Where do we pick up in Episode 2, once Gina has agreed to donate her kidney?
It begins with Drew learning his condition has worsened and he must start dialysis. To ensure Gina is still committed to donating her kidney, he offers to put her up at his home and take care of her until the surgery. 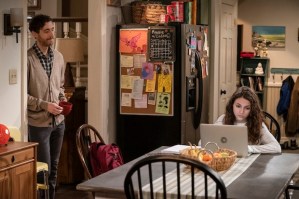 TVLINE | Drew didn’t disclose his diagnosis to Julia or Maddie. How long can he possibly keep it to himself?
After Gina accidentally blurts out the transplant news to [Julia] in Episode 3, he is forced to tell his family the truth about his condition.

What did you think of the B Positive premiere? Will you keep watching? Weigh in via the following polls, then drop a comment with your full review.