Sometimes one’s fate on The Amazing Race is ultimately decided by a stroke of bad luck, an absent-minded taxi driver, or worse yet, a plain old closed road. But such is life on the Race.

On Wednesday’s episode, one pair of sisters struggled to find their way, as a Speed Bump and mass confusion on the road turned their game upside down. What went down and who was eliminated? Let’s break it all down.

Note: This recap was edited down at the last minute, once CBS preempted this week’s second episode (set in Paris, France) for election coverage.

AND THEY’RE OFF… | Will and James are the first to depart the Amazon and fly to Asunción, Paraguay, trusting their alliance with Chee and Hung, Riley and Maddison, Eswar and Aparna, and Gary and DeAngelo holds strong. They’re hopeful, as they spend their extra airport time printing maps of their next destination for the entire group. Everyone is on the same flight, once again equalizing the race.

ROADBLOCK | Riley and Maddison are the first to find the clue, which asks, “Who is feeling instrumental?” In this first roadblock, teams must build a repurposed cello from items they find in a landfill. While most of the teams get an early jump on the task, Kaylynn and Haley’s taxi hits a literal roadblock when a closed street leads to massive confusion. DeAngelo finishes first, receiving a clue that directs them to a local market. Kaylynn and Haley finally find their way, just as DeAngelo and Gary find their next clue and choose not to Yield anyone. (In fact, not a single team utilizes the option on this leg.) 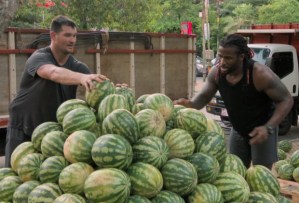 DOUBLE SWITCHBACK DETOUR | Teams must choose between two throwback detours: stacking watermelons or balancing bottles on their heads. And from the Season 20 flashback clips shown, neither is going to be a walk in the park. Gary and DeAngelo try their luck with the fruit, while Will and James head for the bottle dance. While Eswar and Kaylynn struggle big time with the cello, Leo and Alana join the bottle dancing. Glasses smash, while melons roll… this is not a Switchback for the faint of heart.

PIT STOP | Will and James celebrate a successful bottle dance, and race to the Pit Stop at Plaza Italia. The guys check in first to win the leg and $5,000 each! Michelle and Victoria absolutely slay the bottle dance, and check in with Phil to snag slot Number 2, while Leo and Alana place third.

WHO WAS ELIMINATED? | It took Kaylynn nearly four hours to get that cello in shape, but it took about the same time for Gary and DeAngelo to stack their watermelons. Both teams race to the finish, and though the sisters are the last to arrive… it’s a non-elimination round!

Now it’s your turn! Glad to see Kaylynn and Haley survive Leg 4? Sound off in the Comments below.