It’s not yet Election Day, but the remaining Dancing With the Stars couples still awaited a set of life-changing poll results on Monday night.

As we head into the final month of Season 29, the ABC competition solidified its lucky Top 7, with one more duo getting booted from the ballroom. And though Monday’s episode was supposed to end with a double elimination, only one couple ultimately went home, following Jeannie Mai’s premature exit due to an urgent health issue.

As for the night’s other performances, here’s how those shook out:

Nelly and pro Daniella Karagach (Rumba): At the start of this season, I never would have expected to see Nelly dance with the sensitivity that he brought to this rumba; there was a softness and refinement in his movements that’s really impressive, given how steep the learning curve was for him at the beginning, and those arm flourishes extended all the way through his fingertips. That said, at this pivotal point in the season, Nelly needs to be much more technically precise, and I worry that his casual swagger — which has been such an asset thus far! — is turning into a liability, preventing him from performing these ballroom styles the way they’re meant to be performed. Judges’ Score: 21/30 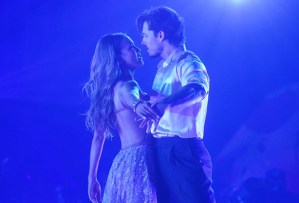 Chrishell Stause and pro Gleb Savchenko (Viennese Waltz, pictured): We all know that Gleb can choreograph some sexy routines. (Case in point: this.) And the sexy routines are fun! In moderation! But this Viennese waltz featured hardly any Viennese waltz content; it felt more like a contemporary routine with some traditional waltz sprinkled in here and there, which isn’t enough time for Chrishell to showcase her skill, or to prove she’s implementing the judges’ critiques from the week before. I love a good dramatic narrative, but Gleb and Chrishell’s performances just don’t have enough substance, especially at this point in the competition. Judges’ Score: 24/30

Skai Jackson and pro Alan Bersten (Salsa): The improvement! The improvement! I was a little nervous to see that Skai and Alan were dancing the salsa, as these high-energy ballroom styles have been problematic for Skai in the past. But on the heels of last week’s ultra-moody Argentine tango, it was thrilling to see how much more comfortable Skai was on the dance floor; there was little to no trace of her panicked expression, and she had a firm grasp on the choreography — even though she could have afforded to sink even deeper into the floor and get a little looser with her arm movements. Judges’ Score: 25/30

Johnny Weir and pro Britt Stewart (Foxtrot): I’m so thrilled to see Johnny finally coming into his own, and there’s a newfound, week-to-week consistency in his performances that we’ve all been waiting for this season. Here’s hoping he remains this sure-footed, because when he’s on, he’s on. Judges’ Score: 27/30 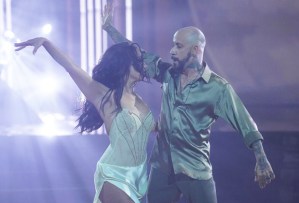 AJ McLean and pro Cheryl Burke (Rumba, pictured): This isn’t AJ and Cheryl’s fault, but it’s odd to me that so many Season 29 contestants — including AJ, Jeannie and Chrishell — are using rumbas to communicate their most harrowing life experiences. Rumbas should be steamy! And intense! And they aren’t the greatest vessels for heartbreaking storytelling, which is why this routine (inspired by AJ’s struggles with drug and alcohol abuse) felt a bit incongruent. There was passion, and there was intensity, but the subject matter seemed to prevent AJ and Cheryl from being as sultry and seductive as this style requires. Judges’ Score: 24/30

This episode also featured “relay dances,” in place of the usual team dances that social distancing guidelines are preventing this season. In each relay dance, multiple couples performed to the same song in the same style, with a new couple tagging in at the beginning, middle and end of the song; each couple then received their own set of bonus points from the judges — ranging from one to three points — for their portion of the routine, which went toward their total score for the night.

SAVED BY JUDGES
Skai Jackson and pro Alan Bersten (saved by all three judges, though Derek was real cagey about it)

Your turn! Are you sad to see Chrishell and Gleb go? And which Top 7 couple is your current favorite? Tell us in the comments below!