Talk about Grace under pressure. For that tense, harrowing final sequence in Sunday’s The Undoing, director Susanne Bier informed Nicole Kidman and Hugh Grant, who star as seemingly perfect Manhattan couple Grace and Jonathan Fraser, that they had an extremely short period of time (we’re talking minutes) to nail the pivotal scene.

While shooting on location on the eastern tip of Long Island last year, Bier says she wanted Grace and Jonathan’s alternately terrifying and gut-wrenching “reunion” to take place during the haunting glow that only dusk could provide. 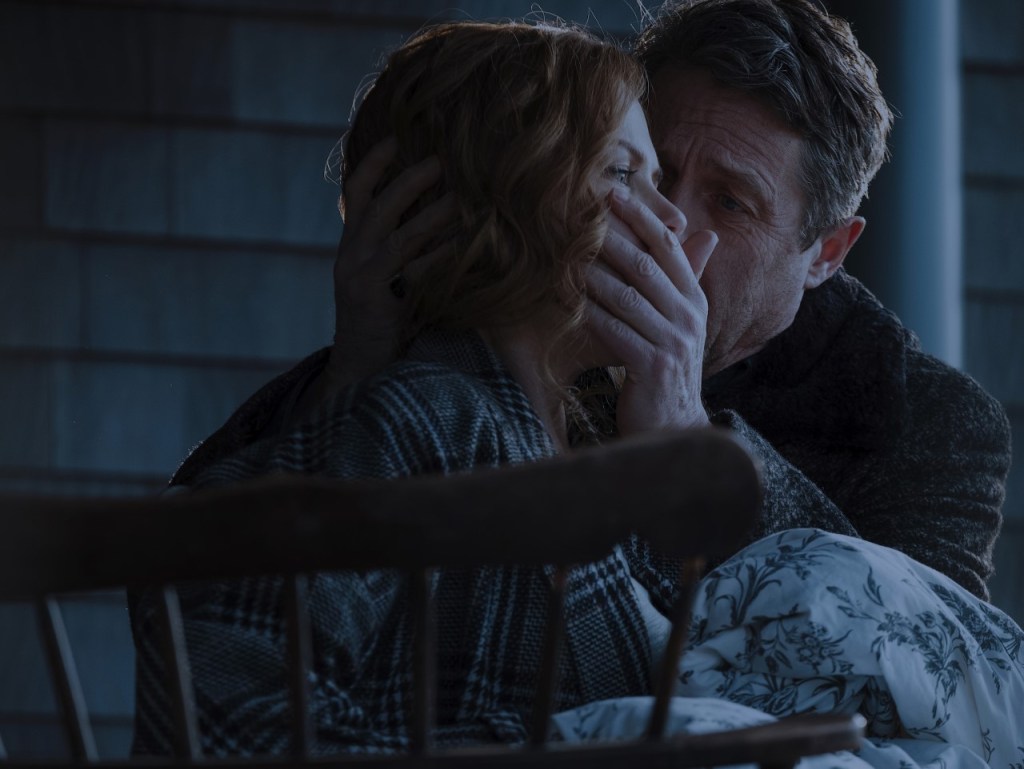 “There’s a half-hour period where the light actually has a blue color,” the auteur explains to TVLine. “And I decided, very unwisely, [to] shoot that scene [in that tight window]. And it’s a huge, friggin’ emotional scene. So we rehearsed it and we rehearsed it and then we waited for the light to kind of come down and we started shooting. We literally had a half-hour to shoot that whole scene.”

In the sequence, Grace is jolted when her fugitive hubby Jonathan — whom she just learned has been living a double life and maybe-possibly murdered his mistress — violently grabs her from behind, covers her mouth and proceeds to profess his innocence. When he finally releases his hand and Grace is allowed to speak, she unloads a torrent of anger, fear and grief on him.

Bier says she was blown away by the duo’s performances. “They both just went for it in a kind of crazy, crazy way,” she recalls, before adding of Kidman, “Here’s the thing about Nicole — she can go on forever. She’s unbelievable. I could have theoretically asked her to do that scene 15 times and she would have delivered an equally strong performance [each time]. But because of that whole crazy endeavor of shooting with the light coming down, I think, as far as I remember, we shot it three times.”

Below, Kidman shares her POV on shooting the emotional roller coster that was Episode 2.

TVLINE | Susanne told me you only had a half-hour to lock that final porch scene. Do you operate well under that kind of pressure?
I was pretty strung out by that stage, [just by] the nature of being in a whole series and the emotional journey that Grace goes on. It was interesting because it was so palpable. Hugh and I were both strung out. So the idea that there was this clock ticking… we just had to jump in and do it. I am very much a performer who goes, “OK, let’s do it. Let’s capture the magic, if there is any.” And that’s what we had to do in that regard. There were some questions about blocking, but once we were off and running we were in it. Susanne is rigorous. She pushes you, which is fantastic, because it [elevates] the quality. And also the location was gorgeous. It was isolated and bare and very Scandinavian in a strange way.

TVLINE | The scene requires you to go to so many different places emotionally in the span of just a few minutes. How did you thread that needle?
When someone disappears and there are all of these things that they have done to you — the lies — you have so many questions and there’s so much anger. Your whole life is completely ravaged, but [at the same time]… she is in love with him. So the desire for him to be telling the truth. The desire for him to not have done it is the underlying thing with her. To hear him say, “I had an affair but I didn’t do it. I did not kill this woman.” And for her it’s like, “Please let this be true. I’m so furious at you. You have destroyed everything and how dare you have an affair but My God you didn’t kill a person and I didn’t think you did.” Those are the things that are colliding. But then also you betrayed me, you destroyed our life, you destroyed our sons’ life, you are a liar… It’s a cataclysmic collision of emotions and intellect. And then there’s, “Are you going to kill me?!”

TVLINE | Grace had a day from hell. I mean, the hits just keep coming…
It’s horrible. All of it. It’s awful. [Laughs] They were lying in bed having a beautiful morning a day prior. [She’s like], “How can you do this to me? I trusted you with my life. I trusted you with my heart. I trusted you.” And it’s all just shattered. When I first read [the script] I didn’t realize what it was going to take for it to be completely real. And I also didn’t know that Susanne was gonna shoot it the way she shoots it where she almost goes into my head. It’s like, “Oh my God you’re inside me.”

TVLINE | Did it make you uncomfortable when she said, “OK, I’m going to shoot an extreme close-up of your eyeballs.”
I just want to do true work. I want to work with someone who is going to mine and explore and put all of their passion [into a project]. I want to work with artists. So I am totally open to people who have that same passion and that same desire. I’m really attracted to it and I desire it and I feel very safe when I am with somebody like that. What I don’t like is when I work with someone that is a bit nonchalant and doesn’t really care. Then I’m like, “This is not the right combination.” Because I’ll go home and night and my dreams will be affected and my whole life gets affected. But that’s my artistic choice and that’s my commitment to what I do. And Susanne is like that. So I was like, “Whatever you need to do to tell this story so that people will feel it. Not just watch it from a distance but go on a journey and feel it.” That’s what we hoped for.