Last week’s episode of The Amazing Race was a stern reminder: The race slows down for no one… not even some of the world’s greatest athletes.

Former Olympic hurdlers Kellie and LaVonne were left behind in Colombia, but one team’s elimination brings the remaining contestants one step closer to the money as they hustle their way to Manaus, Brazil. Although Leg 2’s Yield obstacle ultimately went unused, this week brings the season’s very first U-Turn. Will shots be fired, and which team will be on the receiving end? Read on for highlights from Episode 3.

AND THEY’RE OFF… | Last leg, Leo and Alana gave Kaylynn and Haley a huge clue on the Colombian truck challenge, which earned them some allies and a couple enemies. Will and James were beyond peeved that Kaylynn and Haley received help, and if given the chance, Will and James want nothing more than to U-Turn Leo and Alana to pay them back for putting them in jeopardy.

The teams land in Brazil and make their way to the first clue hidden at the Porto de Manaus market. Eswar and Aparna find the clue first and learn they must pick up 11 items from a list in order to get their next clue. It doesn’t take long for Michelle and Victoria to get lost, and Frank and Jerry blindly follow them. Riley and Maddison find a local to help them out, while the Louisiana sisters quickly realize their mistake. The teams in the front of the pack work together and head to the judging table.

Will and James receive their next clue and head out, but not before clueing the volleyballers in on their missing item. (Helping another team… the same thing they were just hating on Leo and Alana for doing. OK, sure.) Next is a cacophony of mistakes, with multiple teams failing to read the clue and realizing they need to take their bags with them! Other teams begin to freak out when items start disappearing at the check-in table. DeAngelo and Gary’s scarves are M.I.A., and they, along with Hung and Chee, head back to search. Jerry and Frank realize they don’t have a machete, and back they go, too. Mid-boat ride, DeAngelo and Gary tell the sisters they need to bring their items, and not knowing what’s ahead of them, they turn their boat around and head back to shore. 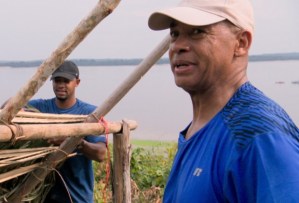 DETOUR | The teams head to Dessana Village in the heart of the Amazon and must decide between helping a chief provide shelter for his new roof or using the items they bought in the market to prepare a meal. Eswar and Aparna, and Riley and Maddison choose to weave the roof, while many of the others get cookin’. Jerry and Frank arrive tardy to the party, only to realize they don’t have their bag. Panic ensues… but they don’t know they could simply choose the other detour option or get U-Turned along the way. Either way, it’s not looking good for the father/son duo.

At the roof build, Riley and Maddison continue helping new alliance members DeAngelo and Gary, while Will and James complete their dish and race toward the U-Turn. They make good on their promise to U-Turn Leo and Alana, and off they head toward the Pit Stop. Alana tells the camera she feels they have a good relationship with all the other teams, since they’ve been so kind to everyone. Awk-ward!

It’s a double U-Turn, and when Chee and Hung arrive, they decide against using it.

PIT STOP | Will and James finish first and win a trip to Bali, while the parents finish second.

Knowing they owe Leo and Alana a favor, Kaylynn and Haley U-Turn Jerry and Frank, the only other team behind Leo and Alana. Looks like it’s a race to the bottom for these last two teams. That is… until Michelle and Victoria neglect to grab their final clue!

Leo and Alana struggle on the shelter detour, but Jerry and Frank have yet to complete even their first obstacle.

WHO WAS ELIMINATED? | Leo and Alana get to the pit stop and check in with Phil, leaving Jerry and Frank in tears… and in last. Sadly, the father and son won’t make it past the Amazon.

Bummed for Jerry and Frank? Tell us all your thoughts in the Comments below!