In the opening moments of Tuesday’s episode, The Voice resolved the cliffhanger which with Night 3 of the Blind Auditions left us: four-chair turn Desz chose as her coach Kelly Clarkson. From there, we were treated to performances by a James Taylor soundalike, a “sappy little sensitive” cowboy (his words) and an unexpected “adoption” of sorts. Read on, and we’ll go over the lot of it.

Olivia Reyes (Team Legend), “Falling” — Grade: B+ | This Jersey girl, secretly signed up for an audition by her pal, the daughter of Season 2 winner Jermaine Paul, marveled at the fact that “the first music opportunity I’ve ever had” was as massive as The Voice. But from the start of her Blind, it sounded to me like massive was what she deserved. On her Harry Styles cover, her vocal was magical — vulnerable and as stretchy as well-chewed bubblegum. Olivia may be raw and untested, but man, she’s got something. 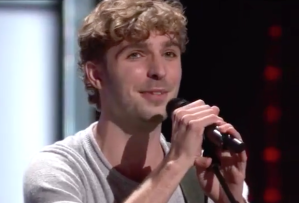 Sam Stacy (Team Blake), “Fire and Rain” — Grade: B | Presented initially as a truly Blind Audition, this former bank employee made us (and three out of four coaches) lean in with a vocal that was as warm and inviting as that first cup of coffee in the morning. He wasn’t going to knock anyone out of their seats with the power of his voice, but dang, it was pretty. And there was an irresistible sweetness to him that was only rivaled by that of his brothers, the most adorkable geek squad this side of The Big Bang Theory. John nailed it: There was a joy to Sam that I suspected would take him far.

Larriah Jackson (Team Gwen), “I’ll Be There” — Grade: A- | A dream child, per her mom, this 15-year-old told us in her pre-interview that being raised by her mom and grandma had taught her that yeah, maybe the biodad who’d abandoned her — and scores of other kids, for that matter — might have missed out on something great. So thoughtful and well-spoken was she, I was sure she was right — and that was before she sang. On stage, the one-chair turn tackled Mariah’s version of the Jackson 5’s hit with enviable poise and a vocal that at times reminded me of Whitney. The definition of lovely, she even inspired her coach to declare not “I just got a contestant” but “I just won a daughter!” 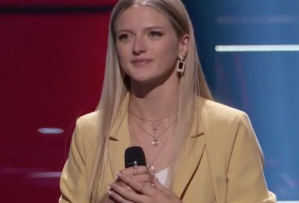 Payton Lamar (Team Blake), “Never Alone” — Grade: B+ | This 23-year-old from Nashville, just back from almost a year of gigging in Paris, tore into her Tori Kelly cover with a ferocity that made the original look chill and laid-back. I honestly couldn’t figure out what the coaches were waiting to hear — Payton sounded to me like she could sing the paint off a wall. John dinged her on a lower register that was lacking, but I was pretty much sold. Maybe it wasn’t a great sign that Blake told us that the next time we heard her, we’d hear a big change in her.

Van Andrew (Team Gwen), “Behind Blue Eyes” — Grade: C | The second oldest of 10 kids, this 29-year-old Texan moved to Nashville two days before a tornado hit and two weeks before the pandemic struck. Though I had a feeling that his authentic, feelin’-it vocals on his Who cover were an acquired taste — they were real but arguably sloppy — he managed to acquire a two-chair turn. He was odd. I found him compelling but not… you know, great. And he seemed too different to me to do well on The Voice, a show that rewards contenders who can fit neatly into a lane. 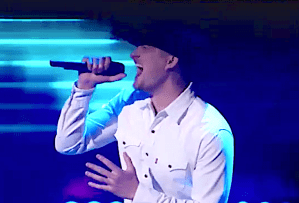 Tanner Gomes (Team Kelly), “Cowboys and Angels” — Grade: C+ | This Arizona cowboy, age 28, shared in his pre-audition interview that he dreamed of turning it all around for his family (including Mom, who became an opioid addict following an accident). But where he really sold me was when he confessed that he was probably “a sappy little sensitive guy.” (If only he didn’t feel like he had to say it like it was something to be ashamed of.) When he took his place behind the mic, he turned out a perfectly good but not great Dustin Lynch cover. He’s an appealing presence, and one who wears his Stetson like it belongs on his head, but not the most compelling country singer we’ve heard this season. Perhaps that’s why Blake was the only coach who didn’t turn around for him — in order to (cough) help him out by letting him go to a team without any lane rivals.

Who wowed you on Night 4 of the Blinds? Vote in the poll below, then hit the comments with your reviews.