Warning: The following contains spoilers for Tuesday’s Season 7 finale of The Haves and the Have Nots. If you haven’t watched yet, you might want to do so before reading further.

After cheating death more often than a cat that’s used up all nine of its lives, Wyatt appeared to finally kick the bucket in Tuesday’s The Haves and the Have Nots. First, he picked up where he left off in the penultimate episode — complaining to Vinny that his re-slit wrists were spilling too much blood — then, he passed out. (Luckily, the Mob boss had left behind one goon to keep him sitting upright.) Finally, in the episode’s closing moments, a woman out walking her dog discovered the poor little rich boy’s seemingly lifeless body in a car parked on the street. But was he really a goner? Color me skeptical — and, by all means, keep reading; we’ll go over all the twists of plot in the Season 7 finale. Wyatt’s “death” was hardly the most shocking.

‘YOU WOULD BE SURPRISED AT THE AMOUNT OF THINGS WOMEN HAVE TO LET GO JUST TO GET THROUGH THIS LIFE’ | As the hour began, no sooner had Mitch tipped off Candace that Benny knew that Derrick was Hanna’s rapist — got all that? — than the siblings were reunited in their swanky hotel room. Benny, as he tends to, had smoke coming out of his ears. He couldn’t understand how his mother and sister could just let Derrick’s crime go unpunished. “As bad as it was,” Candace noted, “I wouldn’t be here [if it hadn’t happened], so you need to try and let it go.” Easier said than done. After Marco informed Veronica that he was tracking whomever was tracking her, so she needn’t worry, she began running errands. Stop No. 1: Justin’s, to inquire about the impromptu pool party she’d only recently shot up. Though she believed him when he insisted that he didn’t know anything about it, she couldn’t resist mentioning to Tanner before she left that his brother had sexually assaulted her son in the back of his cop car. So yeah, she pretty much called it when she identified herself as “that bitch.”

Stop No. 2: Madison’s. Veronica let herself in with gloves and a face mask, purportedly to ask if the skinny-dipping session had been Jeffrey’s idea, but let’s be real, mainly to say horrible, homophobic s—t to her son and his boyfriend. After Jeffrey admitted that originally, the pool party had kinda been his initial brainstorm — and came thisclose to standing up to his mother — Colby returned from his “date” with Justin. “There it is,” said Veronica (the “whoomp” implied, I’m sure). “I didn’t see your broom parked outside,” he quipped. As terrible an idea as it is to irritate Veronica, Colby refused to be bullied or frightened. Ignoring Jeffrey’s pleas, Colby gave the she-monster his full name, then awkwardly pretended to initiate a threesome to drive her out. Eventually, she did go, mocking him with a lisp every step of the way. Oh, Colby. I’m more scared for you now than I’ve ever been for Wyatt! Meanwhile, at the Cryers’, Hanna graduated from Accounting 101 in record time. When Al asked her out, she turned him down — just as their pastor had warned him she would. Ultimately, she said that she’d love to have dinner with Al, but “can you give me a minute?” Deal. 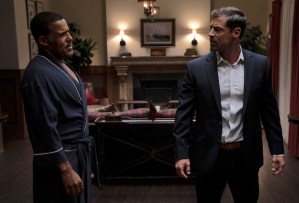 ‘I WANNA BE A KEPT GIRL BY A GOOD GUY’ | At Samuel and Laura’s, he put the kibosh on the expensive presents Veronica lavished on his wife. He didn’t like her ‘do, either. “If I wanted to sleep with a wig,” he told Laura, “I’d take my ass over to her house.” Soon enough, he started receiving texts from Veronica — one of which was simply a picture of money. Lots and lotsa money. When he phoned Veronica, she refused to take no for an answer — she’d found out about Regina, his girl on the side, and now knew that he wasn’t anywhere near as faithful as he’d maintained. At the queen bee’s hive, she asked the hunk questions to which she didn’t really need an answer (like, why had Samuel lied about him and Laura having a dead kid?). Then, she instructed him to strip down and get to work — which he did as we flashed back to their whole, brief, pool-cleaning-filled “courtship.” Finally, Alissa attempted to prove her trustworthiness to David by unlocking her phone and letting him poke around in it as much as he wanted. But when he refused to buy her a house — she didn’t just want an apartment anymore — she snickered that he’d be paying for one one way or another. With that, she deliberately slammed her arm in the door and went running into the night crying rape more loudly with each step.

Right after the episode concluded, it was announced that Season 8’s premiere is just around the corner — November 24. So, Do you believe that Wyatt is finally dead? Doesn’t Veronica deserve to be targeted by someone as vicious as Alissa way more than poor David? Grade the finale below, then comment away.